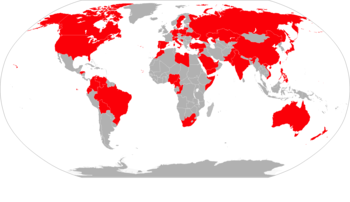 Countries without a primate city highlighted in red.

A primate city (Latin: 'prime', 'first rank'[1]) is the largest city in its country, province, state, or region, disproportionately larger than any others in the urban hierarchy.[2] A primate city distribution is a rank-size distribution that has one very large city with many much smaller cities and towns, and no intermediate-sized urban centers: a King effect, visible as an outlier on an otherwise linear graph, when the rest of the data fit a power law or stretched exponential function.[3] The law of the primate city was first proposed by the geographer Mark Jefferson in 1939.[4] He defines a primate city as being "at least twice as large as the next largest city and more than twice as significant."[5] Aside from size and economic influence, a primate city will usually have precedence in all other aspects of its country's society, such as being a center of politics, media, culture and education and receive most internal migration.

Not all countries have primate cities. In those that do, there is debate as to whether the city serves a parasitic or generative function.[6] The presence of a primate city in a country may indicate an imbalance in development—usually a progressive core and a lagging periphery—on which the city depends for labor and other resources.[7] However, the urban structure is not directly dependent on a country's level of economic development.[2]

Many primate cities gain an increasing share of their country's population. This can be due to a reduction in blue-collar population in the hinterlands because of mechanization and automation. Simultaneously, the number of educated employees in white-collar endeavors such as politics, finance, culture, media, and higher education rises, with those sectors clustered predominantly in the capital where power and money is concentrated.[citation needed]

Bangkok, the capital of Thailand, has been called "the most primate city on Earth",[11] being roughly thirty-five times larger than Thailand's second-largest city of Nakhon Ratchasima.[12] Taking the concept from his examination of the primate city during the 2010 Thai political protests and applying it to the role that primate cities play if they are national capitals, researcher Jack Fong noted that when primate cities like Bangkok function as national capitals, they are inherently vulnerable to insurrection by the military and the dispossessed. He cites the fact that most primate cities serving as national capitals contain major headquarters for the country. Thus, logistically, it is rather "efficient" for national targets to be contested since they are all in one major urban environment.[13]

Urban primacy indicates the ratio of the primate city to the next largest, i.e., the second largest in a country or region. In other words, urban primacy can be defined as the central place in an urban or city network that has acquired or obtained a great level of dominance. The level of dominance is measured by population density and the number of functions offered. Higher functions and population will result in higher dominance.[citation needed]

Burundi, Nigeria and Tanzania do not have a primate city, because their capital is not the largest city. But their largest city is more than twice the population of the second largest city, and is the economic and cultural center of their country.

Myanmar, Sri Lanka, Turkey and the United Arab Emirates do not have a primate city, because their capital is not the largest city. But their largest city is more than twice the population of the second largest city, and is the economic and cultural center of their country.

Although Belize does not have a primate city, Belize city is more than twice the size of the second largest city of Belize and is the cultural and economic center of Belize

New Zealand, a small South Pacific country with a legal constitution, does not have a primate city. Though Auckland is more than twice the size the country's second largest and is the cultural and economic center of New Zealand.