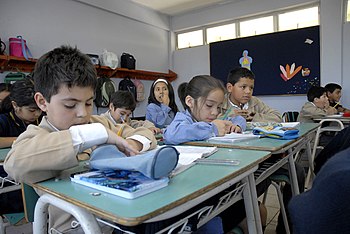 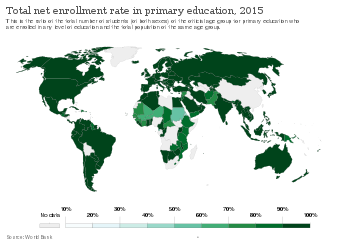 Primary education is typically the first stage of formal education, coming after preschool and before secondary school. Primary education takes place in primary school, the elementary school or first and middle school depending on the location.

The International Standard Classification of Education considers primary education as a single-phase where programmes are typically designed to provide fundamental skills in reading, writing and mathematics and to establish a solid foundation for learning. This is ISCED Level 1: Primary education or first stage of basic education.[a][2]

The ISCED definition in 1997 posited that primary education normally started between the ages of 5 – 8, and was designed to give a sound basic education in reading, writing and mathematics along with an elementary understanding of other subjects. By 2011 the philosophy had changed, the elementary understanding of other subjects had been dropped in favour of "to establish a solid foundation for learning".[2]

The United Nations Children's Fund (UNICEF), believes that providing children with primary education has many positive effects. It

The ages cited cover a rapidly developing phase of child development. This is studied in the discipline of Developmental Psychology , which among other things attempts to describe how children learn.

In Great Britain, reception, the first year of primary school, is part of the Early Year Foundation Stage.

The Philosophy of education, of teaching and learning, has, over the millennia, occupied may great minds. It attempts to say what children should be taught.

In agrarian cultures, the skills of husbandry, bartering, and building skills can be passed on from father to son or master to apprentice. Societies agree on the need for their children to learn and absorb their cultural traditions and beliefs and they attempt to do this informally in the family, or by gathering the children together and employing one adult to handle the task, a tutor.

This leads to religious communities to become providers of education and defining the curriculum. Learning to recite passages from their holy text is a priority. For their society to advance, the oral tradition must be superseded by written texts; some students must go on and write down the passages. Many students need to read out what is written. This led to formal education in madrassas and schools.

Jean Piaget was responsible for establishing the framework that describes the intellectual, moral and emotional development of children.[4] He received a doctorate in 1918 and did post-doctoral research in Zürich and Paris. [5] His thoughts developed in four phases:

Using this framework, the child's staged development can be examined. Lev Vygotsky's theory[7] is based on social learning, where a MKO (a more knowledgeable other) helps them progress within their ZPD (zone of proximal development). Within the ZPD there are skills that the child potentially could do but needs to be shown so they can move from yearning to independent proficiency.[7] The assistance or instruction becomes a form of Instructional scaffolding; this term and idea was developed by Jerome Bruner, David Wood, and Gail Ross.[8] These are in the realms of the:[9] 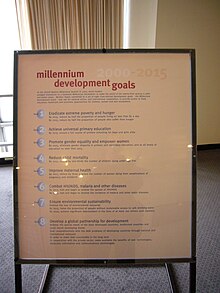 The United Nations Millennium Development Goal 2 (2002) was to achieve universal primary education by the year 2015, by which time their aim was to ensure that all children everywhere, regardless of race or gender, will be able to complete primary schooling.[10]

Due to the fact that the United Nations specifically focused on Sub-Saharan Africa and South Asia, as they are both home to the vast majority of children out of school, they hypothesized that they might not have been able to reach their goal by 2015. According to the September 2010 fact sheet, this was because there were still about 69 million school-age children who were not in school with almost half of the demographic in sub-Saharan Africa and more than a quarter in Southern Asia.[11]

In order to achieve the goal by 2015, the United Nations estimated that all children at the official entry age for primary school would have had to have been attending classes by 2009. This would depend upon the duration of the primary level, as well as how well the schools retain students until the end of the cycle.

Not only was it important for children to be enrolled in education, but countries would have to ensure that there were a sufficient number of teachers and classrooms to meet the demand. As of 2010, the number of new teachers needed in sub-Saharan Africa alone, equaled the extant teaching force in the region.[12]

The gender gap for children not in education narrowed. Between 1999 and 2008, the number of girls not in education worldwide had decreased from 57 percent to 53 percent, but in some regions, the percentage had increased.[12]

According to the United Nations, there are many things in the regions that have already been accomplished. Although enrollment in the sub-Saharan area of Africa continues to be the lowest region worldwide, by 2010 "it still increased by 18 percentage points—from 58 percent to 76 percent—between 1999 and 2008." There was also progress in both Southern Asia and North Africa, where both areas saw an increase in enrollment, For example, In Southern Asia, this had increased by 11 percent and in North Africa by 8 percent- over the last decade.[citation needed]

Major advances had been made even in the poorest of countries like the abolition of primary school fees in Burundi where there was an increase in primary-school enrollment which reached 99 percent as of 2008. Also, Tanzania experienced a similar outcome. The country doubled its enrollment ratio over the same period. Moreover, other regions in Latin America such as Guatemala and Nicaragua, and Zambia in Southern Africa "broke through the 90 percent towards greater access to primary education."[12]

Promoting the rule of law in primary education 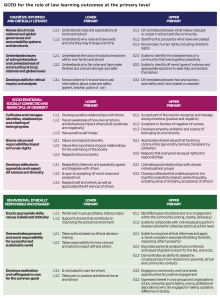 Schools play an important role in children’s socialization and in developing their appreciation of sharing, fairness, mutual respect and cooperation. Schools form the foundational values and competencies that are the building blocks towards the understanding of concepts such as justice, democracy and human rights.[13]

Education systems that promote education for justice, that is, respect for the rule of law (RoL) together with international human rights and fundamental freedoms strengthen the relationship between learners and public institutions with the objective of empowering young people to become champions of peace and justice. Teachers are often on the front line of this work and, along with families, play a formative role in shaping children’s attitudes and behaviours.[13]

Global citizenship education provides the overall framework for the approach to the RoL. It aims to empower learners to engage and assume active roles, both locally and globally, as proactive contributors to a more just, peaceful, tolerant, inclusive, secure and sustainable world.[13]

This article incorporates text from a free content work. Licensed under CC BY-SA 3.0 IGO. Text taken from Empowering students for just societies: a handbook for primary school teachers, UNESCO, UNESCO. UNESCO. To learn how to add open license text to Wikipedia articles, please see this how-to page. For information on reusing text from Wikipedia, please see the terms of use.