The President of Brazil (Portuguese: Presidente do Brasil), officially the President of the Federative Republic of Brazil (Portuguese: Presidente da República Federativa do Brasil) or simply the President of the Republic, is both the head of state and the head of government of Brazil. The president leads the executive branch of the federal government and is the commander-in-chief of the Brazilian Armed Forces. The presidential system was established in 1889, upon the proclamation of the republic in a military coup d'état against Emperor Pedro II. Since then, Brazil has had six constitutions, three dictatorships, and three democratic periods. During the democratic periods, voting has always been compulsory. The Constitution of Brazil, along with several constitutional amendments, establishes the requirements, powers, and responsibilities of the president, their term of office and the method of election.[2]

Jair Bolsonaro is the 38th and current president. He was sworn in on 1 January 2019 following the 2018 presidential election.[3]

As a republic with a presidential executive, Brazil grants significant powers to the president, who effectively controls the executive branch, represents the country abroad, and appoints the cabinet and, with the approval of the Senate, the judges for the Supreme Federal Court. The president is also the commander-in-chief of the armed forces.

Presidents in Brazil have significant lawmaking powers, exercised either by proposing laws to the National Congress or by using Medidas Provisórias (provisional measures), an instrument with the force of law that the president can enact in cases of urgency and necessity except to make changes to some areas of law (provisional measures cannot be used to change criminal law or electoral law). A provisional measure comes into effect immediately, before Congress votes on it, and remains in force for up to 60 days unless Congress votes to rescind it. The 60-day period can be extended once, up to 120 days. If Congress, on the other hand, votes to approve the provisional measure, it becomes an actual law, with changes decided by the legislative branch. The provisional measure expires at the end of the 60-day period (or the 120-day, in the case of extension), or sooner, if rejected by one of the Houses of Congress.[4]

Article 84 of the current Federal Constitution, determines that the president has the power to

The Constitution of Brazil requires that a president be a native-born citizen of Brazil, at least 35 years of age, a resident of Brazil, in full exercise of their electoral rights, a registered voter, and a member of a political party (write-in or independent candidates are prohibited).[5]

The president of Brazil serves for a term of four years,[6] and may be re-elected for a single consecutive term.[7] This two-term limit, however, is not for life—a former president who has served for two consecutive terms may run for the presidency again after at least one term has elapsed.[8]

Running for other offices

A sitting president (or governor or mayor) who wishes to run for a different office, regardless of the intended jurisdiction or branch of government, must resign from office at least six months before election day.[9]

The possibility of reelection was established by the 16th Amendment to the Constitution, in 1997. Before that, presidents had been barred from immediate reelection for all of Brazil's republican history, with the single exception of the latter half of the Vargas Era, from 1937 to 1945. The office was limited to men until the 1937 Constitution.

Compensation and privileges of office

As of 2015,[11] the president receives a monthly salary of R$30,934.70,[1] along with an undisclosed expense account to cover travel, goods and services while in office.[12] Given that in Brazil all private and public sector employees and civil servants receive an additional compensation equivalent to one monthly salary after a year of work (this compensation is known as the thirteenth salary), the president receives 13 payments per year, resulting in an annual salary of R$402,151.10.

The Palácio do Planalto in Brasília is the official workplace of the president and the Palácio da Alvorada their official residence; he or she is entitled to use its staff and facilities.[13][14] The Residência Oficial do Torto, popularly known as Granja do Torto, is a ranch located on the outskirts of the capital and is used as a country retreat by the president.[15] The Palácio Rio Negro in Petrópolis, Rio de Janeiro, is a summer retreat of the president, although used rarely.[16]

In addition, the presidency of the republic also maintains the Jaburu Palace in Brasília for use by the vice president of the Republic as his or her official residence.

In the 2000s, the federal government decided to establish Regional Offices of the Presidency of the Republic in certain key Brazilian cities. Those regional offices are not presidential residences, but they are fully staffed offices ready to receive the president and his ministers at any time, and they function as a presidential workplace when the president is in those cities. The first regional office of the presidency was established in the city of São Paulo, and is located at the Banco do Brasil building at the Paulista Avenue; the building also houses Banco do Brasil's regional headquarters in São Paulo. The presidency of the republic also maintains regional offices in Porto Alegre and in Belo Horizonte. 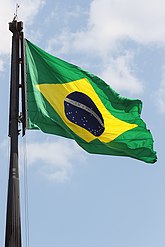 The flag of Brazil

The president may be removed from office[23] using one of two procedures. In either case, two-thirds of the Chamber of Deputies must accept charges against the officeholder (impeachment); and if the Senate accepts the investigation, the president is suspended from exercising the functions of office for up to 180 days. In the case of "common criminal offenses", a trial then takes place at the Supreme Federal Court. In the case of "crimes of malversation", which must fall into one of seven broad areas and which is defined in more detail in law, a trial takes place at the Federal Senate. During the trial, the vice president exercises executive power. If the trial does not result in a conviction within 180 days, the president resumes office; a conviction results in removal from office and succession by the vice president. The seven areas are:[23]

The following privileges are guaranteed to former presidents by law:

As of 16 September 2020, there are six living former presidents and one incumbent president. The most recent death of a former president was that of Itamar Franco (1992–95), on 2 July 2011.

All presidents of Brazil have borne the title President of the Republic. That title has been used by all the constitutions of Brazil since the proclamation of the Republic to refer to the head of the Executive Branch.