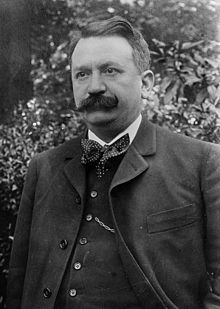 Doumergue came from a Protestant family and was a freemason.[2][3][4] Beginning as a Radical, he turned more towards the political right in his old age. He served as prime minister from 9 December 1913 to 2 June 1914. He held the portfolio for the colonies through the ministries of René Viviani and Aristide Briand until Alexandre Ribot's ministry of March 1917, when he was sent to Russia to persuade Alexander Kerensky's government not to make a separate peace with Germany and Austria-Hungary. He was elected as the 13th French President on 13 June 1924, the only Protestant to hold that office. He served until 13 June 1931 and again was Prime Minister in a conservative national unity government, after the riots of 6 February 1934. That government lasted from 6 February to 8 November 1934.

He was widely regarded as one of the most popular French presidents, particularly after the highly-controversial Alexandre Millerand, who had been his predecessor. Doumergue was single when he was elected and became the first President of France to marry in office.[5] 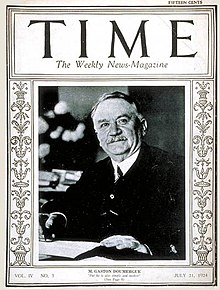