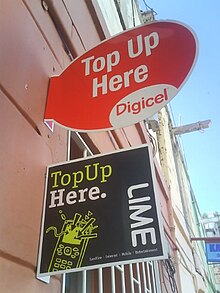 A prepaid mobile device (also commonly referred to as pay-as-you-go (PAYG), pay-as-you-talk, pay and go, go-phone or prepay) is a mobile device such as a phone for which credit is purchased in advance of service use. The purchased credit is used to pay for telecommunications services at the point the service is accessed or consumed. If there is no credit, then access is denied by the cellular network/Intelligent Network. Users can top up their credit at any time using a variety of payment mechanisms. ("Pay-as-you-go", "PAYG", and similar terms are also used for other non-telecommunications services paid for by advance deposit.)

The alternative billing method (and what is commonly referred to as a mobile contract) is the postpaid mobile phone, where a user enters into a long-term contract (lasting 12, 18, or 24 months) or short-term contract (also commonly referred to as a rolling contract or a 30-day contract) and billing arrangement with a mobile phone operator (mobile virtual network operator or mobile network operator).

A prepaid mobile phone provides most of the services offered by a mobile phone operator. The big difference is that with prepaid phones, payment for service is made before use. As calls and texts are made, and as data is used, deductions are made against the prepaid balance amount until no funds remain (at which time services stop functioning). A user may avoid interruptions in service by making payments to increase the remaining balance.

Credit purchased for a prepaid mobile phone may have a time limit – for example, 120 days from the date the last credit was added. In these cases, customers who do not add more credit before expiration will have their remaining balance depleted through expiration of the said credits.

There is no compulsion on a prepaid mobile phone user to top up their balance. To maintain revenues, some operators have devised reward schemes designed to encourage frequent top-ups. For example, an operator may offer some free SMS to use next month if a user tops up by a certain amount this month.

Unlike postpaid phones, where subscribers have to terminate their contracts, it is not easy for an operator to know when a prepaid subscriber has left the network. To free up resources on the network for new customers, an operator will periodically delete prepaid SIM cards which have not been used for some time, at which point, their service (and its associated phone number) is discontinued. The rules for when this deletion happens vary from operator to operator, but may typically occur after six months to a year of non-use.

The history of prepaid mobile phones begins in the 1990s, when larger markets were being sought after by the mobile phone operators. Before this date, all mobile phone services were offered on a post-paid basis, which excluded people with a poor credit rating.

Prepaid mobile service was invented by Subscriber Computing, Inc., an Orange County company, (1986-1998), founded and directed by Arlene Harris. The patents covering this invention are:

The prepaid service was sold to Metro Mobile in June 1989, and it was implemented in November 1989.

Ericsson also became a partner in the prepaid service; the Memorandum of Understanding (MOU) was signed in June 1997 and the final agreement was signed in late 1997. The announcement was made on January 26, 1998 (or listen to it).

In 1996 MTN became the first mobile operator to introduce a Prepaid cellular service in Africa, popularizing “pay as you go” in emerging markets.[5]

The first Prepaid card was called "Mimo" and was launched by TMN, the mobile phone operator of Portugal Telecom, in September 1995.[6] In 2006 Swisscom celebrated ten years with its product and service "NATEL® easy" which also holds a patent on the topic "Prepaid mobile subscriber identification card and method implemented thereby".[7][8]

A prepaid plan may have a lower cost (often for low usage patterns e.g. a telephone for emergency use) and make it easier to control spending by limiting debt and controlling usage. They often have fewer contractual obligations – no early termination fee, freedom to change providers, plans, able to be used by those unable to take out a contract (i.e. under age of majority). Depending on the local laws, they may be available to those who do not have a permanent address, phone number, or credit card. This makes them popular among travelers and students away from their home towns. Additionally, they are popular with parents who wish to have a way to stay connected with their college age students and have some control over the costs.

Sometimes, pay-as-you-go customers pay more for their calls, SMS and data, than contract customers. In some cases they are limited in what they can do with their phone – calls to international or premium-rate telephone numbers may be blocked, and they may not be able to roam. These limitations are usually[citation needed] the results of deficiencies in the prepaid systems used by the wireless carriers as technology has evolved to the point where all this is easily managed by triggers or APIs to third-party solution providers (data, international LD, content, roaming). Current models being deployed by wireless carriers are capable of setting the price points for all services on an individual basis (via packages), such that higher pricing is a marketing decision. The days of higher pricing being due to more expensive network costs are no more true.

As described above, prepaid accounts require a subscriber to have a credit balance in the account to make outgoing calls (except emergency calls, which are always allowed). In the US, incoming calls are also barred, while in some other countries, a prepaid mobile with zero balance may still receive calls and texts.

This results in an "on/off" or "all or nothing" proposition for the prepaid service providers and their clients (i.e. the account either has enough credit to use the phone, or it does not). Some operators (e.g., Orange) allow their pre-paid customers to have a small negative balance to allow short calls or texts when the customer's credit has been completely used. This is then deducted when the customer next adds more credit.

In the early years, a prepaid mobile phone could only be used within the network of the operator from which the customer purchased the phone. It was not possible to roam onto other GSM networks when using the phone abroad. This was because the operator had no way to bill calls in real time from another network.

However, most prepaid phones now offer roaming using one of the following methods:

As of July 2013, at least 80 countries globally (including 37 on the African continent) have mandated, or are actively considering mandating, the registration of prepaid SIM users.[9]

The reason is a concern by police and security agencies that anonymous use of prepaid mobile services facilitates criminal or terrorist activities.

Prepaid phone users can be anonymous for two reasons:

While there is no doubt that criminals and terrorists use prepaid SIM cards to help stay anonymous and avoid easy detection, to date there has been no empirical evidence to indicate that:

In fact, a publicly available policy assessment report from Mexico showed that mandatory SIM registration introduced there in 2009 had failed to help the prevention, investigation and/or prosecution of associated crimes. As a result, policymakers decided to repeal the regulation three years later.[9]

A prepaid phone number specifically purchased to be used briefly and then replaced is known colloquially as a burner phone or burner. A Los Angeles technology company currently offers a mobile application of the same name that replicates this functionality for a smartphone.[10]

Usage of prepaid cellphone service is common in most parts of the world. Around 70% of customers in Western Europe and China use prepaid phones with the figure rising to over 90% for customers in India and Africa.[16] 23% of cellphone users in the United States of America were using prepaid service as of 2011, a share that's expected to rise to 29% by 2016.[17] Prepaid SIM cards are also becoming a variation of the traditional prepaid cellphone plans. Rather than needing to purchase an entirely new phone, existing phones can be used by simply replacing the SIM card within the device.[18]