Precipitation in the form of a sunshower

In meteorology, the various types of precipitation often include the character or phase of the precipitation which is falling to ground level. There are three distinct ways that precipitation can occur. Convective precipitation is generally more intense, and of shorter duration, than stratiform precipitation. Orographic precipitation occurs when moist air is forced upwards over rising terrain, such as a mountain.

Precipitation can fall in either liquid or solid phases, or transition between them at the freezing level. Liquid forms of precipitation include rain and drizzle and dew. Rain or drizzle which freezes on contact within a subfreezing air mass gains the preceding adjective "freezing", becoming known as freezing rain or freezing drizzle. Frozen forms of precipitation include snow, ice crystals, ice pellets (sleet), hail, and graupel. Their respective intensities are classified either by rate of fall, or by visibility restriction.

Precipitation falls in many forms, or phases. They can be subdivided into:

The parenthesized letters are the METAR codes for each phenomenon.[1]

Precipitation occurs when local air becomes saturated with water vapor, and can no longer maintain the level of water vapor in gaseous form. This occurs when less dense moist air cools, usually when an air mass rises through the atmosphere. However, an air mass can also cool without a change in altitude (e.g. through radiative cooling, or ground contact with cold terrain).

Convective precipitation occurs when air rises vertically through the (temporarily) self-sustaining mechanism of convection. Stratiform precipitation occurs when large air masses rise diagonally as larger-scale atmospheric dynamics force them to move over each other. Orographic precipitation is similar, except the upwards motion is forced when a moving air mass encounters the rising slope of a landform such as a mountain ridge.

Convection occurs when the Earth's surface, especially within a conditionally unstable or moist atmosphere, becomes heated more than its surroundings and in turn leading to significant evaporation. Convective rain and light precipitation are the result of convective clouds, for example cumulonimbus or cumulus congestus. In the initial stages of this precipitation, it generally falls as showers with rapidly changing intensity. Convective precipitation falls over a certain area for a relatively short time, as convective clouds have limited vertical and horizontal extent. Most precipitation in the tropics appears to be convective; however, it has been suggested that stratiform and convective precipitation often both occur within the same complex of convection-generated cumulonimbus.[2][3]

Graupel and hail indicate convection; when either are present at the surface, it is indicative that some form of precipitation is extant at the freezing level, a varying point in the atmosphere in which the temperature is 0°C.[4] In mid-latitude regions, convective precipitation is often associated with cold fronts where as it is often found behind the front, occasionally initiating a squall line. 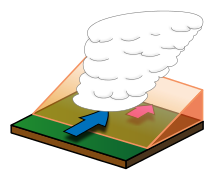 A weather front is the boundary of two air masses

When masses of air with different densities (moisture and temperature characteristics) meet, the less dense warmer air overrides the more dense colder air. The warmer air is forced to rise and, if conditions are right, creates an effect of saturation, causing precipitation. In turn, precipitation can enhance the temperature and dewpoint contrast along a frontal boundary.[further explanation needed] Passing weather fronts often result in sudden changes in environmental temperature, and in turn the humidity and pressure in the air at ground level.

Warm fronts occur where warm air pushes out a previously extant cold air mass. The warm air overrides the cooler air and moves upward dud . Warm fronts are followed by extended periods of light rain and drizzle due to the fact that, after the warm air rises above the cooler air (which remains on the ground), it gradually cools due to the air's expansion while being lifted, which forms clouds and leads to precipitation.

Cold fronts occur when a mass of cooler air dislodges a mass of warm air. This type of transition is sharper,[further explanation needed] since cold air is more dense than warm air. Precipitation duration is often shorter and generally more intense than that which occurs ahead of warm fronts.

A wide variety of weather can be found along an occluded front, but usually their passage is associated with a drying of the air mass. 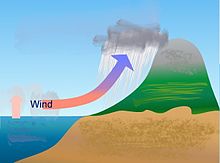 Orographic or relief rainfall is caused when masses of air are forced up the side of elevated land formations, such as large mountains (often referred to as an upslope effect). The lift of the air up the side of the mountain results in adiabatic cooling, and ultimately condensation and precipitation. In mountainous parts of the world subjected to relatively consistent winds (for example, the trade winds), a more moist climate usually prevails on the windward side of a mountain than on the leeward (downwind) side. Moisture is removed by orographic lift, leaving drier air (see Foehn) on the descending (generally warming), leeward side where a rain shadow is observed.[6]

In Hawaii, Mount Waiʻaleʻale (Waiʻaleʻale), on the island of Kauai, is notable for its extreme rainfall. It has the highest average annual rainfall on Earth, with 460 inches (12,000 mm) per year.[7] Storm systems affect the region with heavy rains between October and March. Local climates vary considerably on each island due to their topography, divisible into windward (Koʻolau) and leeward (Kona) regions based upon location relative to the higher mountains. Windward sides face the east-to-northeast trade winds and receive much more rainfall; leeward sides are drier and sunnier, with less rain and less cloud cover.[8] On the island of Oahu, clouds and often rain can usually be observed around the windward mountain peaks, while the southern parts of the island (including most of Honolulu and Waikiki) receive dramatically less rainfall throughout the year.