Dipole radiation of a dipole vertically in the page showing electric field strength (colour) and Poynting vector (arrows) in the plane of the page.

In physics, the Poynting vector represents the directional energy flux (the energy transfer per unit area per unit time) of an electromagnetic field. The SI unit of the Poynting vector is the watt per square metre (W/m2). It is named after its discoverer John Henry Poynting who first derived it in 1884.[1]:132 Oliver Heaviside also discovered it independently in the more general form that recognises the freedom of adding the curl of an arbitrary vector field to the definition.[2]

In Poynting's original paper and in many textbooks, the Poynting vector is defined as[3][4][5]

where bold letters represent vectors and

This expression is often called the Abraham form.[6] The Poynting vector is usually denoted by S or N.

In the "microscopic" version of Maxwell's equations, this definition must be replaced by a definition in terms of the electric field E and the magnetic field B (described later in the article).

It is also possible to combine the electric displacement field D with the magnetic field B to get the Minkowski form of the Poynting vector, or use D and H to construct yet another version. The choice has been controversial: Pfeifer et al.[7] summarize and to a certain extent resolve the century-long dispute between proponents of the Abraham and Minkowski forms (see Abraham–Minkowski controversy).

The Poynting vector represents the particular case of an energy flux vector for electromagnetic energy. However, any type of energy has its direction of movement in space, as well as its density, so energy flux vectors can be defined for other types of energy as well, e.g., for mechanical energy. The Umov–Poynting vector[8] discovered by Nikolay Umov in 1874 describes energy flux in liquid and elastic media in a completely generalized view.

A DC circuit consisting of a battery (V) and resistor (R), showing the direction of the Poynting vector (S, blue arrows) in the space surrounding it, along with the fields it is derived from; the electric field (E, red arrows) and the magnetic field (H, green arrows). In the region around the battery the Poynting vector is directed outward, indicating power flowing out of the battery into the fields; in the region around the resistor the vector is directed inward, indicating field power flowing into the resistor. Across any plane P between the battery and resistor, the Poynting flux is in the direction of the resistor. The magnitudes (lengths) of the vectors are not shown accurately; only the directions are significant.

The Poynting vector appears in Poynting's theorem (see that article for the derivation), an energy-conservation law:

where Jf is the current density of free charges and u is the electromagnetic energy density for linear, nondispersive materials, given by

The first term in the right-hand side represents the electromagnetic energy flow into a small volume, while the second term subtracts the work done by the field on free electrical currents, which thereby exits from electromagnetic energy as dissipation, heat, etc. In this definition, bound electrical currents are not included in this term, and instead contribute to S and u.

For linear, nondispersive and isotropic (for simplicity) materials, the constitutive relations can be written as

In principle, this limits Poynting's theorem in this form to fields in vacuum and nondispersive linear materials. A generalization to dispersive materials is possible under certain circumstances at the cost of additional terms.[9]:262–264

The "microscopic" (differential) version of Maxwell's equations admits only the fundamental fields E and B, without a built-in model of material media. Only the vacuum permittivity and permeability are used, and there is no D or H. When this model is used, the Poynting vector is defined as

This is actually the general expression of the Poynting vector.[10] The corresponding form of Poynting's theorem is

where ε0 is the vacuum permittivity. It can be derived directly from Maxwell's equations in terms of total charge and current and the Lorentz force law only.

The two alternative definitions of the Poynting vector are equal in vacuum or in non-magnetic materials, where B = μ0H. In all other cases, they differ in that S = (1/μ0) E × B and the corresponding u are purely radiative, since the dissipation term −J ⋅ E covers the total current, while the E × H definition has contributions from bound currents which are then excluded from the dissipation term.[11]

Since only the microscopic fields E and B occur in the derivation of S = (1/μ0) E × B, assumptions about any material present are completely avoided, and Poynting vector and theorem are universally valid, in vacuum as in all kinds of material. This is especially true[clarification needed] for the electromagnetic energy density, in contrast to the "macroscopic" form E × H.[11]

The field lines of the time-averaged Poynting vector of an electric dipole close to a mirror create complex patterns.

The above form for the Poynting vector represents the instantaneous power flow due to instantaneous electric and magnetic fields. More commonly, problems in electromagnetics are solved in terms of sinusoidally varying fields at a specified frequency. The results can then be applied more generally, for instance, by representing incoherent radiation as a superposition of such waves at different frequencies and with fluctuating amplitudes.

We would thus not be considering the instantaneous E(t) and H(t) used above, but rather a complex (vector) amplitude for each which describes a coherent wave's phase (as well as amplitude) using phasor notation. These complex amplitude vectors are not functions of time, as they are understood to refer to oscillations over all time. A phasor such as

where ω is the (radian) frequency of the sinusoidal wave being considered.

In the time domain it will be seen that the instantaneous power flow will be fluctuating at a frequency of 2ω. But what is normally of interest is the average power flow in which those fluctuations are not considered. In the math below, this is accomplished by integrating over a full cycle

. The following quantity, still referred to as a "Poynting vector", is expressed directly in terms of the phasors as:

where ∗ denotes the complex conjugate. The time-averaged power flow (according to the instantaneous Poynting vector averaged over a full cycle, for instance) is then given by the real part of

. The imaginary part is usually ignored, however it signifies "reactive power" such as the interference due to a standing wave or the near field of an antenna. In a single electromagnetic plane wave (rather than a standing wave which can be described as two such waves travelling in opposite directions), E and H are exactly in phase, so

is simply a real number according to the above definition.

to the time-average of the instantaneous Poynting vector S can be shown as follows.

The average of the instantaneous Poynting vector S over time is given by:

The second term is the double-frequency component having an average value of zero, so we find:

According to some conventions the factor of 1/2 in the above definition may be left out. Multiplication by 1/2 is required to properly describe the power flow since the magnitudes of

refer to the peak fields of the oscillating quantities. If rather the fields are described in terms of their root mean square (rms) values (which are each smaller by the factor

), then the correct average power flow is obtained without multiplication by 1/2. 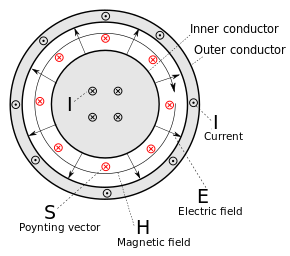 Poynting vector in a coaxial cable, shown in red.

where Em is the complex amplitude of the electric field and η is the characteristic impedance of the transmission medium, or just η0

377Ω for a plane wave in free space. This directly follows from the above expression for the average Poynting vector using phasor quantities, and the fact that in a plane wave the magnetic field

is equal to the electric field

divided by η (and thus exactly in phase).

In optics, the time-averaged value of the radiated flux is technically known as the irradiance, more often simply referred to as the intensity.

The density of the linear momentum of the electromagnetic field is S/c2 where S is the magnitude of the Poynting vector and c is the speed of light in free space. The radiation pressure exerted by an electromagnetic wave on the surface of a target is given by 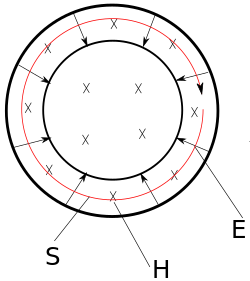 The consideration of the Poynting vector in static fields shows the relativistic nature of the Maxwell equations and allows a better understanding of the magnetic component of the Lorentz force, q(v × B). To illustrate, the accompanying picture is considered, which describes the Poynting vector in a cylindrical capacitor, which is located in an H field (pointing into the page) generated by a permanent magnet. Although there are only static electric and magnetic fields, the calculation of the Poynting vector produces a clockwise circular flow of electromagnetic energy, with no beginning or end.

While the circulating energy flow may seem nonsensical or paradoxical, it is necessary to maintain conservation of momentum. Momentum density is proportional to energy flow density, so the circulating flow of energy contains an angular momentum.[15] This is the cause of the magnetic component of the Lorentz force which occurs when the capacitor is discharged. During discharge, the angular momentum contained in the energy flow is depleted as it is transferred to the charges of the discharge current crossing the magnetic field.

Adding the curl of a vector field

However the theory of special relativity, in which energy and momentum are defined locally and invariantly via the stress–energy tensor, shows that the above-given expression for the Poynting vector is unique.[9]:258–260,605–612