Potton is a township municipality of about 1,850 people in the Memphrémagog Regional County Municipality. It is located on the western shore of Lake Memphremagog in the Estrie (Eastern Townships) region of Quebec, and is one of the municipalities in Brome County. Potton is located about 125 kilometres (78 mi) southeast of Montreal, 30 kilometres (19 mi) to the southwest of the city of Magog, and next to the United States border, north of North Troy, Vermont.

Of these, Mansonville is the business center and the seat of government (Municipalite du canton de Potton) for the township. Formerly a sleepy community, Mansonville has experienced some growth and prosperity because of its proximity to the Owl's Head ski resort. Like many Eastern Townships and New England villages, Mansonville grew up around a water-powered mill which exploited a head of water above a fall on the North Branch of the Missisquoi River. The mill ceased operating with electrification in the early 20th century, which allowed economies of scale and centralized manufacturing in larger centres. It operated as a feed and grain mill until 2004, when it was destroyed by fire. Overlooking the mill site is the mansion of the Manson family that founded the town. The mansion has since become a bed and breakfast.

The Newport Subdivision of the Central Maine and Quebec Railway railroad route from Newport, Vermont to Richford, Vermont traverses the township at Highwater and follows the Mississquoi River.

Mansonville, like many Eastern Townships communities, has long had a mixture of French and English-speaking residents and is home to over twenty nationalities and ethnic groups. Religious diversity is present, and in Mansonville, Roman Catholic, United (closed 2011) and Anglican churches are located a few yards apart. Mansonville was also the home of Russian Orthodox prelate Metropolitan Vitaly Ustinov for some five decades until his death in 2006.

The area encompassed by the township is part of the larger territory originally inhabited by the Abenaki tribe. There are no known permanent Abenaki habitation sites in the township. The area was used by them for hunting and fishing. Lake Memphremagog and the Missisquoi River were important trade and travel routes. A number of place names originate from them:[5]

There are several solstice sites and petroglyph sites in the township.

The Eastern Townships of Quebec were opened for settlement by the Constitutional Act of 1791.[9] The first European settler in Potton township was Nicholas Austin. He was a Loyalist from Somersworth, New Hampshire who in 1791 settled at the site of present-day Perkins Landing.[10] Due to a navigation error, he moved, in 1793, north to Bolton Township to the land that was allocated to him. The town of Austin remembers his name.[11] Austin's log house at Perkins Landing was assumed by Samuel Perkins in 1793.[12] Other early settlers of Potton Township were David Blanchard, Col. Henry Ruiter,[13] Moses Elkins, and the Perkins, Manson, Gilman, and Coit families.[14] The names of the early settlers remain in the toponymy of the township: Ruiter's Brook in Dunkin, Vale Perkins, Perkins Landing, Mansonville, and Knowlton's Landing.

Potton Township was proclaimed on October 31, 1797.[15] It, and the homonymous municipality township erected in 1845, derive their name from the town of Potton in England, located in Bedfordshire, near the village of Sutton.

Perkins Landing and Knowlton's Landing were regular stops for the steamships that plied Lake Memphremagog from the latter half of the 19th century up to the mid-20th century. The first of these steamships was the Mountain Maid, the Lady of the Lake was the largest, and the last was the Anthemis. The wharves at these locations now provide public access to the lake.

Two lighthouses were located on the shore of Lake Memphremagog.[16] They were built in 1878 and no longer exist.

A round barn, built in 1911 for Robert Jersey, is situated in Mansonville. The structure and site were listed as a cultural heritage site in 2009.[20]

Highwater was the site of the Space Research Corporation where Gerald Bull performed ballistics research.

Portions of the 1998 movie "Free Money" were filmed in Vale Perkins, Highwater, Mansonville, and near Mount Owl's Head. 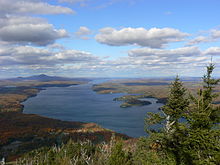 The township is dotted with many mountains. Among the more prominent peaks are:[21]

Potton is well known for the many sugar bushes that produce maple syrup, considered among the most remarkable in the Quebec.

Most of the bedrock underlying the township is Cambrian-era slate, schist, phyllite, greywacke and quartzite. There are bands of ultramafic rock near the Missisquoi River valley, and basalt also occurs. Quaternary glaciation left deposits of stony loam till plus outwash deposits of sand and gravel. Benchlands overlooking the Missisquoi River commonly have deposits of clay loam. Brown podzolic and podzol profile developments are most common.[22]

The area is also rich in talc. For many years the Baker Talc company operated underground mining and open-pit operations in South Bolton, with a plant in Highwater. The mine and plant are inactive.

Other inactive mines include a copper mine on the northwestern slope of Hog's Back and a lead mine in Leadville.