The Pothohar Plateau (Punjabi: پوٹھوار, Urdu: سطح مرتفع پوٹھوہار‎; alternatively spelled Potohar, Potwar or Pothwar) is a plateau in north-eastern Pakistan, forming the northern part of Punjab. It borders the western parts of Azad Kashmir and the southern part of Khyber Pakhtunkhwa. The region was once the home of the ancient Soanian culture, which is evidenced by the discovery of fossils, tools, coins, and remains of ancient archaeological sites.

The major language of the region is Pothwari, while the standard Majhi dialect of Punjabi is also spoken. Other dialects include Dhani dialect and Shahpuri.[citation needed]

Potohar Plateau is bounded on the east by the Jhelum River, on the west by the Indus River, on the north by the Kala Chitta Range and the Margalla Hills, and on the south by the Salt Range.[2] The Kala Chitta Range thrusts eastward across the plateau towards Rawalpindi; the valleys of the Haro and Soan rivers cross the plateau from the eastern foothills to the Indus. The ramparts of the Salt Range stretching from east to west in the south separate Potohar from the Punjab Plain. The Potwar Plateau includes parts of the current four districts of Jhelum (partially), Chakwal and Rawalpindi.[3] The terrain is undulating. The Kala Chitta Range rises to an average height of 450–900 metres and extends for about 72 kilometres. The Swaan River starts from nearby Murree and ends near Kalabagh in the Indus river. Sakesar (Khushab District) is the highest mountain of this region and Tilla Jogian in Jhelum District is second highest.

Most of the hills and rivers are bordered by dissected ravine belts. The streams, due to constant rejuvenation, are deep set and of little use for irrigation. Agriculture is dependent largely on rainfall, which averages 380–500 mm annually; rainfall is greatest in the northwest and declines to arid conditions in the southwest. The chief crops are wheat, barley, sorghum, and legumes, onions, melons, and tobacco are grown in the more fertile areas near the River Indus.

The diverse wildlife includes urial, chinkara, chukar, hare, mongoose, wild boar, and yellow-throated marten. Due to low rain fall, extensive deforestation, coal mining, oil and gas exploration, the area is becoming devoid of vegetation. The under water areas of lakes (Uchali, Khabeki, Jhallar and Kallar Kahar) have been reduced to much smaller areas than in the past.

The plateau is the location of major Pakistani oil fields, the first of which were discovered at Khaur (1915) and Dhuliān (1935); the Tut field was discovered in 1968, Missa Keswal was discovered in 1992 and exploration continued in the area in the 1990s. The oil fields are connected by pipeline to the Attock Refinery in Rawalpindi.[4]

A major oil reserve has been discovered near Jhelum in Punjab, opening up a new area for exploitation of hydrocarbon potential.

With an estimated production of 5,500 barrels per day, the Ghauri X-1 oil well is expected to be the country’s largest oil-producing well and is likely to start contributing its output to the system by the end of June,2014.

The major cities of Islamabad and Rawalpindi, and the smaller cities of Chakwal, Gujar Khan Sohawa and Attock are situated on the plateau. 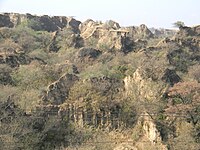 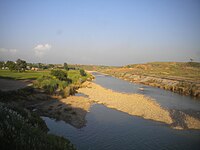 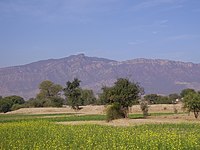 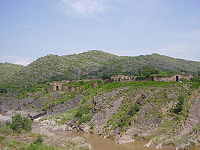 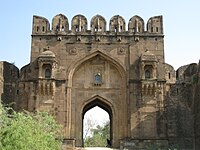 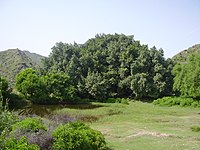 Existence of the Soanian culture finds its home on the plateau. The Indus Valley civilization is known to have flourished in the same region between the 23rd and 18th centuries BC. Some of the earliest Stone Age artifacts in the world have been found on the plateau, dating from 500,000 to 100,000 years. The crude stone recovered from the terraces of the Soan carry the account of human grind and endeavors in this part of the world from the inter-glacial period.

The Stone Age people produced their equipment in a sufficiently homogenous way to justify their grouping. Around 3000 BC, small village communities developed in the area, which led to the early roots of civilization.

The ruins of the Shahi destroyed by Mahmud of Ghazni in the 11th century and of ancient Gandhara destroyed in the 6th century by the Hunas (Indo-Hephthalites) litter the countryside.

Ancient Taxila is an ancient UNESCO World Heritage Site located on the plateau. Taxila (then called taksh-shila) was Hindu and Buddhist seat of learning, connected across the Khunjerab pass to the Silk Road, attracting students from all over the world. Ancient Takshashila was renowned all over the world as home to a great university. It came under the control of the first Persian empire known then as the Achaemenid Empire followed by Alexander the Great and then the Sassanians (see Indo-Sassanian). As a city in Gandhara it flourished during the first-fifth centuries AD. It was finally destroyed in c.450-c.565 by the Hunas.

The material remains found on the site of the city of Rawalpindi prove the existence of a Gandhara Buddhist establishment contemporary to Taxila but less celebrated than its neighbor. It appears that the ancient city also went into oblivion as a result of the same Hunas devastation. The Gakhar chief Jhanda Khan restored it and gave it the name of Rawalpindi after the village Rawal in 1493 AD. Today it is the twin city of the capital of Pakistan, Islamabad which was built next to it.

Rohtas Fort located near the Potwar is another UNESCO World Heritage site, built by Sher Shah Suri in 1541 to control the Gakhars who remained loyal to the deposed Mughal Emperor Humayun.[5][6]

Rawat Fort is located 17 kilometres (11 mi) east of Rawalpindi, on the Grand Trunk Road leading to Lahore. The grave of a Gakhar Chief, Sultan Sarang Khan is located inside the fort. He died in 1546 AD fighting against the forces of Sher Shah Suri. If one dares to climb the broken steps inside the tomb, one may get a panoramic view of the plateau and the Mankiala Stupa. The remains of this Buddhist Stupa lie about 32 km south east of Rawalpindi in Mankiala village. Apparently, this Gandhara stupa was built in the reign of Kanishka (128-151 AD). According to legend, Buddha had sacrificed parts of his body here, to feed seven hungry tiger-cubs. In 1930, several gold, silver and copper coins (660 - 730 AD) and a bronze casket having Kharoṣṭhī inscriptions, were discovered from this stupa.

Pharwala Fort is about 40 kilometres (25 mi) from Rawalpindi beyond Lehtrar road. The Gakhar ruler, Sultan Kai Gohar built it in 10th century on the ruins of a 10th-century Hindu Shahi Fort. Gakhars ruled Pothohar region for about eight hundred and fifty years. Emperor Babur attacked the fort in 1519 AD before Hathi (Hammad) Khan had acknowledged him.

The Salt Range is dotted with Hindu temples, of which the most notable is the Katasraj temple. Located 25 kilometres (16 mi) from Chakwal, Katasraj is notable in many ways. The temple was abandoned by local Hindu's when they migrated to East Punjab in 1947. Many legends sacred to the Hindus are associated with it, some of them involving the Hindu deity Shiva himself. It has always been the site of holy pilgrimage. Today, Hindu worshipers perform a pilgrimage to the temple every year and bathe in the sacred pool around which Katasraj is built. This is due to an agreement between India and Pakistan. According to Hindu mythology, the five Pandava brothers, heroes of the Sanskrit epic Mahābhārata, stayed here for four out of the 14 years that they spent in exile. While Katas Raj has not received much publicity, the two semi-ruined temples of the Hindu Shahi period (650-950 AD) have been frequently photographed by newspapers and history journals.

A joint project with Professors Abdur Rehman, past Chairman of the Department of Archaeology, University of Peshawar, and Farid Khan, founder of the Pakistan Heritage Society, has begun to analyse and document these important monuments in the history of South Asian temple architecture with funding from the University of Pennsylvania. Two seasons of excavation have been carried out at the site of North Kafirkot.[7]