View from the sea

Porto Venere (Italian pronunciation: [ˌpɔrto ˈvɛːnere]; until 1991 Portovenere;[3] Ligurian: Pòrtivene) is a town and comune (municipality) located on the Ligurian coast of Italy in the province of La Spezia. It comprises the three villages of Fezzano, Le Grazie and Porto Venere, and the three islands of Palmaria, Tino and Tinetto. In 1997 Porto Venere and the villages of Cinque Terre were designated by UNESCO as a World Heritage Site. 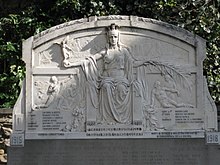 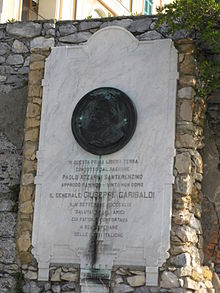 The ancient Portus Veneris is believed to date back to at least the middle of the 1st century BC. It has been said that the name refers to a temple to the goddess Venus which was sited on the promontory where the church of Peter the Apostle now stands. The name has also been linked to that of the hermit Saint Venerius. In Roman times the city was essentially a fishing community.

After the fall of the Western Roman Empire, Porto Venere became the base of the Byzantine fleet in the northern Tyrrhenian Sea, but was destroyed by the Lombards in 643 AD. Later, it was a frequent target of Saracen raids. First indications of the existence of a castle date from 1113, and in 1161 the walls were erected. Porto Venere became a fiefdom of a family from Vezzano before passing to Genoa in the early 12th century. In 1494, it suffered a devastating bombardment from the Aragonese fleet during their war with Genoa: subsequently the old part of the town declined in importance, giving way to the development of the Borgo Nuovo ("New District"), which had existed from 1139 and is centred on the church of St. Peter.

On 2 December 1797, after the French established their domination in Italy, the town became part of the Department of the Gulf of Venus, with the capital in La Spezia, in the Ligurian Republic annexed to the First French Empire. From 28 April 1798 with the new French law, the territory of Portovenere fell in the seventh canton, as the capital, the Jurisdiction of the Gulf of Venus since 1803 and the main center of the third State of the Gulf of Venus in the jurisdiction of the Gulf of Venus. From 13 June 1805 to 1814 it was included in the Department of the Apennines. It was at this point which, in 1812, it became part of the coastal route called "Route Napoleon" in honor of the French general and now known as localized road 530, which still connects the marine center with La Spezia via Fezzano, Le Grazie and Terizzo.

In 1815 it was incorporated in the Kingdom of Sardinia, according to the decisions of the Congress of Wien of 1814, and subsequently in the Kingdom of Italy from 1861. From 1859 to 1927 the territory was included in the First district of La Spezia, part of the Eastern District of the Province of Genoa before and, with its establishment in 1923, the Province of La Spezia.

In 1998 it obtained for its architectural heritage and natural entry in the list of protected World Heritage Site, with the Rolli in Genoa's historic center, one of only two Ligurian sites, and in 2001 established the eponymous Regional Natural Park.[4]

The municipal Coat of arms was approved by the special decree of the Head of the Government dated 19 April 1933. In addition to the emblem and banner of the city is the cross of St. George to be also a symbol of civic and historical community of Porto Venere, including banner bearing its coat of arms (the color of Genoa are the flags of the three towers) and wants to emphasize the secular alliance of the village with the ancient Republic of Genoa. This "objective" is also mentioned in the municipal charter.

The village lies at the southern end of a peninsula, which, breaking away from the jagged coastline of the Riviera di Levante, forming the western tip of the Gulf of La Spezia. At the end of this peninsula are three small islands: Palmaria, Tino and Tinetto; only Palmaria Island, which lies directly opposite the village of Porto Venere beyond a narrow strait, is partially inhabited.

It is bordered to the north by the municipality of La Spezia, and to the south, west and east by the Mediterranean Sea. It is about 3.2 kilometres (2 mi) south of La Spezia and 72 kilometres (45 mi) southeast of Genoa.

There is a conveyor system with the sewer grates and pumps that push the waste into a subsea pipeline that comes out to about 200 metres (660 ft) beyond the toe of St. Peter. The strong current and high depth of discharge, about 35 metres (115 ft), contribute to the rapid dispersion of the fluid.

The beaches of the area are a tourist attraction.

Byron's Grotto, so named because the poet Lord Byron used to meditate there

The climate is typically Mediterranean, with almost no excess heat in summer and no freezing in winter. However, rainfall can be abundant, especially in autumn and spring, due to the orography of the Riviera di Levante. In the municipal area, the weather station is located on Island of Palmaria, where data can be considered similar to those occurring in Porto Venere and the surrounding areas. The area of Portovenere-Palmaria Island is the only point behind in the Ligurian Sea between the Isle of Elba and the islands of Hyères, France. Hence the strategic role in the history of seafaring.

In the municipality of Porto Venere, in Panigaglia, into the Gulf of Spezia, there is a regasification plant, thanks to which it can import by sea, in the liquid state, natural hydrocarbon gas such as liquified natural gas. Portovenere's economy focuses on tourism. Hotels, bed and breakfasts, guest houses, and residences have become more important in recent years. The popular shopping promenade in the Doria quay and the picturesque Alley and panoramic views to the church of St. Peter and the Doria Castle. The harbor of Portovenere, although the smallest of Liguria, is always sold out in the summer season and also hosts many celebrities.

Natural places in Porto Venere include the famous sea caves Byron (Cala dell'Arpaia), Azzurra or Blue Cave (semi-submerged) and Tinetto; the cavity of the Doves and the wall of Tino, the shoal of Dante and Small and Big creeks. Byron's cave, named after the English poet George Gordon Byron, who found inspiration and meditation for his literary works here. It is located at the spur of rock below the church of St. Peter and the old defensive position, the marine cave has a minimum depth of five meters and a maximum of twenty along the side.

The Regional Natural Park in Portovenere offers a unique landscape with its high coasts, caves and vegetation that permeates the atmosphere in any season with the changing shades of color. An element that blends and harmonizes every detail is the sea, sometimes calm and clear, so as to reflect like a mirror enchanted multicolored rocks and seagulls, sometimes rough and almost angry. To crown the Park archipelago with three islands of Palmaria, Tino and Tinetto, defying the blue sea in a swirl of aromas and looks towards the infinite. But the park is not only Nature, History dwells here since prehistoric times with the Cave of the Doves, until the recent past in which Guglielmo Marconi experimented in front of the village his innovative studies.