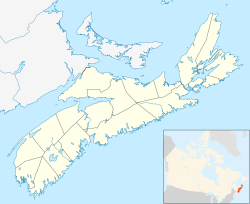 Predominantly a farming community, Port Royal is also a significant tourist destination in Nova Scotia due to being the location of a historic French colonial settlement, commemorated by Port-Royal National Historic Site, which was established in 1925. A replica of the original settlement was constructed by the Government of Canada in 1939-41.[2]

The name Port Royal was officially established for the community by the Geographical Names Board of Canada on March 2, 1950.[1] 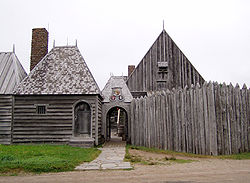 Port-Royal National Historic Site, location of the Habitation at Port-Royal which is a replica of the original French colonial settlement.

The original French settlement and capital of the colony of Acadia was named Port-Royal. It was located in the present-day community of Port Royal from 1605 until its destruction by a company of Englishmen from the Jamestown settlement in Virginia led by Samuel Argall in 1613. This settlement was rebuilt as a historic replica in 1939-41 by the Government of Canada and is called Port-Royal National Historic Site.

After 1613, France moved the settlement/capital of Port-Royal approximately 8 km (5.0 mi) upstream to the south bank of the Annapolis River at present-day Annapolis Royal (see Port-Royal (Acadia)). This second settlement was seized by British military forces in 1710 in the Siege of Port Royal and was renamed Annapolis Royal in honour of Anne, Queen of Great Britain.