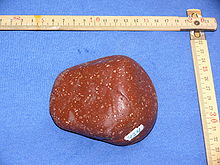 A piece of porphyry

Rhyolite porphyry-scale bar in lower left is 1 cm
This article is about the igneous rock. For other uses, see Porphyry.

Porphyry is a textural term for an igneous rock consisting of large-grained crystals such as feldspar or quartz dispersed in a fine-grained silicate rich, generally aphanitic matrix or groundmass. The larger crystals are called phenocrysts. In its non-geologic, traditional use, the term porphyry refers to the purple-red form of this stone, valued for its appearance.

The term porphyry /ˈpɔːrfɪriː/ is from Ancient Greek (πορφύρα porphyra) and means "purple". Purple was the color of royalty, and the "imperial porphyry" was a deep purple igneous rock with large crystals of plagioclase. Some authors claimed the rock was the hardest known in antiquity.[1] "Imperial" grade porphyry was thus prized for monuments and building projects in Imperial Rome and later. Porphyry typically has hardness 7 on the Mohs scale of mineral hardness,[citation needed] corresponding to steel and quartz.

Subsequently, the name was given to any igneous rocks with large crystals. The adjective porphyritic now refers to a certain texture of igneous rock regardless of its chemical and mineralogical composition. Its chief characteristic is a large difference in size between the tiny matrix crystals and the much larger phenocrysts. Porphyries may be aphanites or phanerites, that is, the groundmass may have invisibly small crystals as in basalt, or crystals easily distinguishable with the eye, as in granite. Most types of igneous rocks display some degree of porphyritic texture. 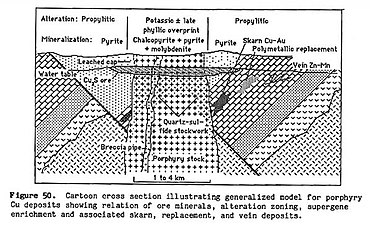 The term porphyry is also used for a mineral deposit called a "copper porphyry". The different stages of cooling that create porphyritic textures in intrusive and hypabyssal porphyritic rocks also lead to a separation of dissolved metals into distinct zones.

This process, which occurs primarily when fluids are driven off the cooling magma, is one of the main reasons for the existence in the world of rich, localized metal ore deposits such as those of gold, copper, molybdenum, lead, tin, zinc, rhenium and tungsten. This enrichment occurs in the porphyry itself, or in other related igneous rocks or surrounding country rocks, especially carbonate rock (in a process similar to skarns). Collectively, these type of deposits are known as "porphyry copper deposits".[2]

Rhomb porphyry is a volcanic rock with gray-white large porphyritic rhombus-shaped phenocrysts embedded in a very fine-grained red-brown matrix. The composition of rhomb porphyry places it in the trachyte–latite classification of the QAPF diagram.

Rhomb porphyry lavas are only known from three rift areas: the East African Rift (including Mount Kilimanjaro), Mount Erebus near the Ross Sea in Antarctica, and the Oslo graben in Norway. It is intrusive. 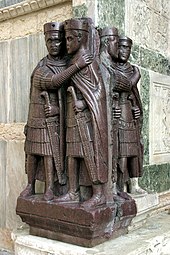 The Tetrarchs, a porphyry sculpture sacked from the Byzantine Philadelphion palace in 1204, Treasury of St. Marks, Venice 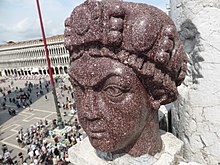 Pliny's Natural History affirmed that the "Imperial Porphyry" had been discovered at an isolated site in Egypt in AD 18, by a Roman legionary named Caius Cominius Leugas.[3] Ancient Egyptians used other decorative porphyritic stones of a very close composition and appearance, but apparently remained unaware of the presence of the Roman grade although it was located in their own country.

This particular Imperial grade of porphyry all came from the Gabal Abu Dukhan quarry in the Eastern Desert of Egypt, from 600 million-year-old andesite of the Arabian-Nubian Shield. The road from the quarry westward to Qena (Roman Maximianopolis) on the Nile, which Ptolemy put on his second-century map, was first described by Strabo, and it is to this day known as the Via Porphyrites, the Porphyry Road, its track marked by the hydreumata, or watering wells that made it viable in this utterly dry landscape.

Porphyry was extensively used in Byzantine imperial monuments, for example in Hagia Sophia[4] and in the "Porphyra", the official delivery room for use of pregnant Empresses in the Great Palace of Constantinople.[5]

After the fifth century the quarry was lost to sight for many centuries. Byzantium scholar Alexander Vasiliev suggested this was the consequence of the Council of Chalcedon in 451 CE and the subsequent troubles in Egypt.[6] The scientific members of the French Expedition under Napoleon sought it in vain, and it was only when the Eastern Desert was reopened for study under Muhammad Ali that the site was rediscovered by James Burton and John Gardiner Wilkinson in 1823.

As early as 1850 BC on Crete in Minoan Knossos there were large column bases made of porphyry.[7] All the porphyry columns in Rome, the red porphyry togas on busts of emperors, the porphyry panels in the revetment of the Pantheon,[3] as well as the altars and vases and fountain basins reused in the Renaissance and dispersed as far as Kiev, all came from the one quarry at Mons Porpyritis[8] ("Porphyry Mountain", the Arabic Jabal Abu Dukhan), which seems to have been worked intermittently between 29 and 335 AD.[9] Porphyry was also used for the blocks of the Column of Constantine in Istanbul.[10] 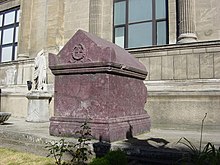 Choosing porphyry as a material was a bold and specific statement for late Imperial Rome. As if it were not enough that porphyry was explicitly for imperial use, the stone's rarity set the emperors apart from their subjects as their superiors. The comparative vividness of porphyry to other stones underscored that these figures were not regular citizens, but many levels above, even gods, and worthy of the respect they expected. Porphyry made the emperors unapproachable in terms of power and nature, belonging to another world, the world of the mighty gods, present for a short time on earth.[11]

Porphyry also stood in for the physical purple robes Roman emperors wore to show status, because of its purple coloring. Similar to porphyry, purple fabric was extremely difficult to make, as what we now call Tyrian purple required the use of rare snails to make the dye.[12] The color itself reminded the public to how to behave in the presence of the emperors, with respect bordering on worship for the self-proclaimed god-kings.[13]

A uniquely prestigious use of porphyry was its choice as material for imperial sarcophagi in the 4th and early 5th centuries CE. That tradition appears to have been started with Diocletian's porphyry sarcophagus in his mausoleum, which was destroyed when the building was repurposed as a church but of which probable fragments are at the Archaeological Museum in Split, Croatia.[14] The oldest and best-preserved ones are now conserved at the Vatican Museums and known as the Sarcophagi of Helena and Constantina. Nine others imperial porphyry sarcophagi were long held in the Church of the Holy Apostles in Constantinople. They were described by Constantine VII Porphyrogenitus in the De Ceremoniis (mid-10th century CE), who specified them to be respectively of Constantine the Great, Constantius II, Julian, Jovian, Theodosius I, Arcadius, Aelia Eudoxia, Theodosius II, and Marcian. Of these, most still exist in complete or fragmentary form, despite depredations by later Byzantine Emperors, Crusaders, and Ottoman conquerors.[6] Four presently adorn the facade of the main building of the İstanbul Archaeology Museums,[15] including one whose rounded shape led Alexander Vasiliev to suggest attribution to Emperor Julian on the basis of Constantine Porphyrogenitus's description. Vasiliev conjectures that the nine imperial sarcophagi, including one which carries a crux ansata or Egyptian cross, were carved in Egypt before shipment to Constantinople.[6]

The tradition was emulated by Ostrogothic King Theodoric the Great (454-526), whose mausoleum in Ravenna still contains a porphyry tub that was used as his sarcophagus.

The tomb of Peter III of Aragon, in the Monastery of Santes Creus near Tarragona, reuses a porphyry tub or alveus, which has been conjectured to be originally the sarcophagus of Late Roman Emperor Constans in his mausoleum at Centcelles, a nearby site with a well-preserved 4th-century rotunda.[16] 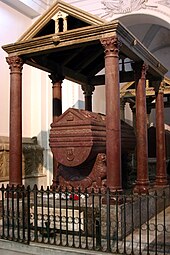 In 12th- and 13th-century Sicily, another group of porphyry sarcophagi were produced from the reign of Roger II onwards and used for Royal and then Imperial burials, namely those of King Roger II, King William I, Emperor Henry VI, Empress Constance, and Emperor Frederick II. They are all now in the Palermo Cathedral, except William's in Monreale Cathedral. Scholar Rosa Bacile argues that they were carved by a local workshop from porphyry imported from Rome, the latter four plausibly (based on observation of their fluting) all from a single column shaft that may have been taken from the Baths of Caracalla or the Baths of Diocletian. She notes that these Sicilian porphyry sarcophagi "are the very first examples of medieval free-standing secular tombs in the West, and therefore play a unique role within the history of Italian sepulchral art (earlier and later tombs are adjacent to, and dependent on walls)." [17]

In countries where many cars have studded winter tires such as Sweden, Finland and Norway, it is common that highways are paved with asphalt made of porphyry aggregate to make the wearing course withstand the extreme wear from the spiked winter tires.[18]