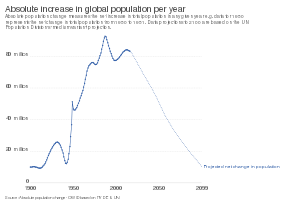 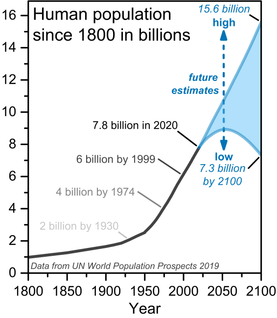 World human population estimates from 1800 to 2100, with estimated range of future population after 2020 based on "high" and "low" scenarios. Data from the United Nations projections in 2019.

World population has been rising continuously since the end of the Black Death, around the year 1350.[7] Population began growing rapidly in the Western world during the industrial revolution. The most significant increase in the world's population has been since the 1950s, mainly due to medical advancements[8] and increases in agricultural productivity.[9]

Due to its dramatic impact on the human ability to grow food, the Haber process served as the "detonator of the population explosion", enabling the global population to increase from 1.6 billion in 1900 to 7.7 billion by November 2019.[10]

Some of the reasons for the "Modern Rise of Population"[11] were particularly investigated by the British health scientist Thomas McKeown (1912-1988). In his publications, McKeown challenged four theories about the population growth:

Although the McKeown thesis has been heavily disputed, recent studies have confirmed the value of his ideas.[16] His work is pivotal for present day thinking about population growth, birth control, public health and medical care. McKeown had a major influence on many population researchers, such as health economists and Nobel prize winners Robert W. Fogel (1993) and Angus Deaton (2015). The latter considered McKeown as "the founder of social medicine".[17]

The logistic growth of a population.

As it is a separable differential equation, the population may be solved explicitly, producing a logistic function:

is the initial population at time 0. 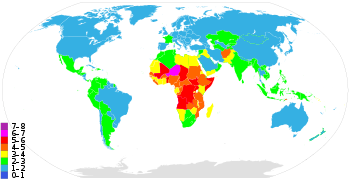 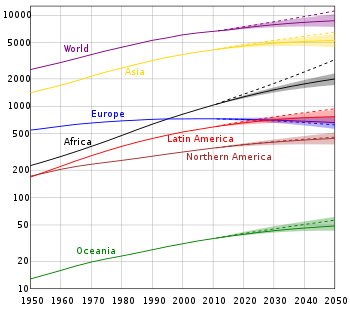 Estimates of population evolution in different continents between 1950 and 2050 according to the United Nations. The vertical axis is logarithmic and is in millions of people.

In 2017, the estimated annual growth rate was 1.1%.[21] The CIA World Factbook gives the world annual birthrate, mortality rate, and growth rate as 1.86%, 0.78%, and 1.08% respectively.[22] The last 100 years have seen a massive fourfold increase in the population, due to medical advances, lower mortality rates, and an increase in agricultural productivity[23] made possible by the Green Revolution.

The annual increase in the number of living humans peaked at 88.0 million in 1989, then slowly declined to 73.9 million in 2003, after which it rose again to 75.2 million in 2006. In 2017, the human population increased by 83 million.[21] Generally, developed nations have seen a decline in their growth rates in recent decades, though annual growth rates remain above 2% in poverty-stricken countries of the Middle East and Sub-Saharan Africa, and also in South Asia, Southeast Asia, and Latin America.[24]

In some countries the population is declining, especially in Eastern Europe, mainly due to low fertility rates, high death rates and emigration. In Southern Africa, growth is slowing due to the high number of AIDS-related deaths. Some Western Europe countries might also experience population decline.[25] Japan's population began decreasing in 2005.[26]

The United Nations Population Division projects world population to reach 11.2 billion by the end of the 21st century, but Sanjeev Sanyal has argued that global fertility will fall below the replacement rate in the 2020s and that world population will peak below 9 billion by 2050, followed by a long decline.[27] A 2014 study in Science concludes that the global population will reach 11 billion by 2100, with a 70% chance of continued growth into the 22nd century.[28]

Many of the world's countries, including many in Sub-Saharan Africa, the Middle East, South Asia and South East Asia, have seen a sharp rise in population since the end of the Cold War. The fear is that high population numbers are putting further strain on natural resources, food supplies, fuel supplies, employment, housing, etc. in some of the less fortunate countries. For example, the population of Chad has ultimately grown from 6,279,921 in 1993 to 10,329,208 in 2009,[31] further straining its resources. Vietnam, Mexico, Nigeria, Egypt, Ethiopia, and the DRC are witnessing a similar growth in population.

Thousands of scooters make their way through the city of Hồ Chí Minh, Vietnam.

Growth comparison between Africa and Europe 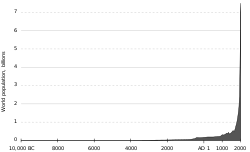 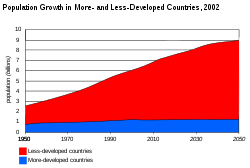 The majority of world population growth today is occurring in less developed countries.

According to the UN's 2017 revision to its population projections, world population is projected to reach 11.2 billion by 2100 compared to 7.6 billion in 2017.[90][91] In 2011, Indian economist Sanjeev Sanyal disputed the UN's figures and argued that birth rates will fall below replacement rates in the 2020s. According to his projections, population growth will be only sustained till the 2040s by rising longevity, but will peak below 9 bn by 2050.[27] Conversely, a 2014 paper by demographers from several universities and the United Nations Population Division projected that the world's population would reach about 10.9 billion in 2100 and continue growing thereafter.[92] One of its authors, Adrian Raftery, a University of Washington professor of statistics and of sociology, says "The consensus over the past 20 years or so was that world population, which is currently around 7 billion, would go up to 9 billion and level off or probably decline. We found there’s a 70 percent probability the world population will not stabilize this century. Population, which had sort of fallen off the world’s agenda, remains a very important issue."[93]

The German Foundation for World Population reported in December 2019 that the global human population grows by 2.6 people every second, and could reach 8 billion by 2023.[94]