A popemobile is a specially designed motor vehicle used by the pope of the Catholic Church during public appearances.[1] It is usually considered as the successor to the antiquated sedia gestatoria and was designed to allow the pope to be more visible when greeting large crowds.

There have been many different designs for popemobiles since Pope Paul VI first used a modified Lincoln Continental to greet crowds in New York City in 1965. Some are open air while others have bulletproof glass walls to enclose the pope (deemed necessary after the 1981 Pope John Paul II assassination attempt). Some allow the pope to sit, while others are designed to accommodate him standing. The variety of popemobiles allows the Roman Curia to select an appropriate one for each usage depending upon the level of security needed, distance, speed of travel, and the pope's preferences. 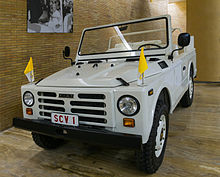 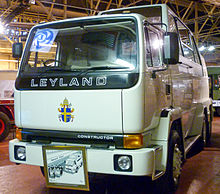 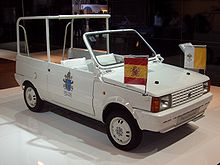 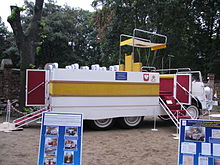 Since the beginning of the 20th century, many automotive manufacturers have produced specially designed vehicles for the Pope. The Ford Motor Company produced a series of cars based on its presidential limousines used in the United States. The custom-built 1964 Lehmann-Peterson was used by Pope Paul VI in his 1965 New York City visit and was reused in 1970 in Bogotá. Later, Paul VI used a Mercedes-Benz 600 Pullman-Landaulet. However, the term "popemobile" did not come into common usage until the pontificate of Pope John Paul II.

The first time that Pope John Paul II travelled to his home country, the white vehicle was based on the Polish mark FSC Star, a small truck from a firm in Starachowice. A Ford D Series truck was built in 1979 by OBAM Vehicle Builders, for Pope John Paul II's first visit to Ireland; it was bigger than the later one used in Vatican City. Another popemobile was a modified Mercedes-Benz with a small windowed enclosure in the back where the Pope sits. A converted 230 G Mercedes-Benz G-Class was built for John Paul II's visit to Germany in 1980.[5] A later model was presented to John Paul II in June 2002 based on a Mercedes-Benz M-Class sports-utility vehicle built in the United States. A Fiat Campagnola was used during transit within Vatican City and during masses at St. Peter's Square. But the popemobile was fitted with bulletproof glass on four sides following the 1981 Pope John Paul II assassination attempt. However, it was sometimes driven with open windows.

Leyland supplied a truck-based popemobile in 1982 during the pope's visit to Great Britain which gave audiences a better view of the pontiff. The vehicle was sold at auction in 2006 for £37,000 ($70,500). The pope used a popemobile derived from the SEAT Panda model during his visit to Spain in 1982. That specific car was open-air with a grab handle in front so that the pope could stand still and greet the crowds while moving.[6] The pope entered the Camp Nou football stadium in Barcelona in it,[7] driving through the assembled crowds celebrating mass for a congregation of over 121,000 on 17 November 1982.

During the pope's visit to Canada in 1984, a modified GMC Sierra was used as a base, rebuilt by the Thibault Fire Engines Company in Pierreville, Quebec. It was subsequently used for the 1998 papal visit to Cuba and was displayed at the Canada Science and Technology Museum in Ottawa in 2005. The second truck built by the Thibault Fire Engines Company[8] was sent back to the Vatican in 1984.[9]

During the papal visit to the United States in September 1987, a pair of Mercedes-Benz 230 G popemobiles were flown to Washington, D.C. and modified by the United States Secret Service to provide access to the papal compartment from the driver's cabin, a design that continued to be used after the trip.[10] One of these vehicles has been retired and is currently on display at the Mercedes-Benz Museum in Stuttgart, Germany.

Philippine automobile manufacturer Francisco Motors produced the popemobile for John Paul II's visit to Manila for World Youth Day 1995. It was funded by voluntary contributions and had bulletproof windows and bombproof parts. For Pope John Paul II's visit to Portugal, UMM created a special popemobile based on a 1992 chassis from the Alter II. It featured a 40 mm (1.6 in) armored glass box on the rear with a chair for the pope. It also had air conditioning and outside loudspeakers connected to a microphone in the rear.

In 2002, Pope John Paul II requested that the media stop referring to the car as the popemobile, saying that the term was "undignified".[1] In 2007, the popemobile became the first papal automobile to be fitted with a digital radio. The popemobile most often used by Pope Benedict XVI when travelling abroad was a modified Mercedes-Benz M-Class sport utility vehicle with a special glass-enclosed room with its own oxygen supply built into the back of the vehicle. The pope enters through a rear door and ascends several steps. He sits in a chair made from white leather with gold trim which is then elevated into the glass room by a hydraulic lift, allowing the pope to be more easily seen. In addition to the driver, there is room for one passenger (usually a security agent) in the front of the vehicle. The glass-enclosed rear of the vehicle also has room for two papal aides who can sit in the area in front of the pope's elevated chair. The vehicle's security features include bulletproof glass windows and roof, able to withstand explosions, and reinforced, armored side panels and undercarriage designed to resist bomb blasts. At 2011 prices, the popemobile cost approximately £345,000.[11]

On June 6, 2007, a German man tried to jump into Pope Benedict XVI's uncovered popemobile as the pontiff began his general audience. The pope was not hurt and did not even appear to notice that the man had jumped over the protective barrier in the square and had grabbed onto the white Fiat popemobile as it drove by. At least eight security officers were trailing the vehicle as it moved slowly through the square; they grabbed the man and wrestled him to the ground, and he was interrogated by Vatican police.[12]

In 2019 Pope Francis received a Dacia Duster 4x4 to be used as popemobile during his visit to Romania.[13]

Pope Francis shows a preference for a simpler lifestyle and simpler cars. As a cardinal he often took public transport. On the night of his election he rode with the other cardinals in a minibus back to their hotel instead of using a papal limousine. For trips within the Vatican City he uses a small Ford Focus from the Vatican motor pool. He also drives himself around the city in a 30-year-old 1984 Renault 4 presented to him by Italian Fr. Renzo Zocca.[14]

Italian automaker Fiat, traditional supplier of papal cars, supplied Pope Francis with the midsize Fiat 500L for his visit to the United States on 22–27 September 2015. Fiat also supplied the Jeep Wrangler he used in Ecuador in July 2015.