Polokwane (UK: /ˌpɒləˈkwɑːnɪ/[3], meaning "Place of Safety" in Northern Sotho[4][5][6]), also known by its former name, Pietersburg, is a city and the capital of the Limpopo Province of South Africa. It is South Africa's largest urban centre north of Gauteng. Polokwane was one of the host cities of the official tournament of the 2010 FIFA World Cup.

In the 1840s, Voortrekkers under the leadership of Andries Potgieter established Zoutpansbergdorp, a town 100 km (62 mi) to the northwest. This settlement had to be abandoned because of clashes with the local tribes. They founded a new town in 1886 and named it "Pietersburg" in honour of Voortrekker leader Petrus Jacobus Joubert. The British built a concentration camp at Pietersburg during the Boer War to incarcerate almost 4,000 Boer women and children. The town officially became a city on 23 April 1992; on 25 February 2005, the government declared the official name of the city as Polokwane, a name that was generally in use by the speakers of Northern Sotho. The city was host to 52nd national conference of the African National Congress, held in December 2007 and saw Jacob Zuma voted as President of the ANC.[7][8]

In 1904, Pietersburg had a population of 3,276, of whom 1,620 (49.5%) were whites.[9] Pietersburg was a white-designated area during apartheid, so had an overwhelming white majority before 1990. After the dismantling of apartheid, the city still retained a large white population. Neighbouring townships have black majorities.[10] 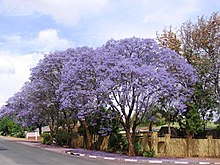 Besides the above-mentioned suburbs in the city, three clusters of suburbs around the city exist:[13]

Polokwane features a semiarid climate under the Köppen climate classification. Despite its position on the Tropic of Capricorn,[15] the climate is tempered by its position on a plateau 1230 m above sea level.[16] Average temperatures reach around 21–22 °C (70–72 °F) in January and fall to 11 °C (52 °F) in July.[16] As with much of inland South Africa, Polokwane has experienced notably warmer seasons over the last decade than its long-term average.[17] Polokwane has a dry climate with a summer rainy season and a pronounced dry spell during winter. Average annual rainfall is 495 mm (19.5 in), with December or (less often) January the wettest month and July the driest.[18]

Nelson Mandela road traffic island on the approach to Polokwane

Polokwane lies roughly halfway between Gauteng (300 kilometres (190 mi)) and the Zimbabwean border (200 kilometres (120 mi)) on the N1 highway, which connects Zimbabwe with the major cities of South Africa, such as Pretoria, Johannesburg, Bloemfontein, and Cape Town.

The Nelson Mandela road traffic island is situated on the outskirts of Polokwane when approaching from the direction of Johannesburg. It was built prior to the 2010 FIFA World Cup as part of beautifying the city for the event.

A number of private bus services run in the city and also services connect Polokwane to other major centers in the country.

Polokwane is connected to Johannesburg and other major centres by rail. Agricultural produce in the area, including tomatoes, citrus fruit, sugar cane, peanuts, tea, bananas, and avocados, is also transported by freight rail.[23]

The South African Broadcasting Corporation has a branch in the city.[24] The city also hosts a branch of the country's largest independent radio station, Jacaranda RM/FM, which is broadcast from either Pretoria, Mbombela or Polokwane.[25]

The first commercial radio station in Limpopo, CapricornFM, broadcasts from the city.[26] Two additional radio stations are also situated in Polokwane. These include Energy FM and Munghana Lonene FM. [27] [28]

The city has a selection of locally distributed newspapers. Two notable newspapers include The Review [29] and The Polokwane Observer.[30]

The Sun International casino and hotel is in Polokwane. Meropa Casino and Entertainment World is a Moroccan-style, 24-hour casino with various outdoor entertainment amenities such as go-karts, minigolf, and a wildlife park.[31] 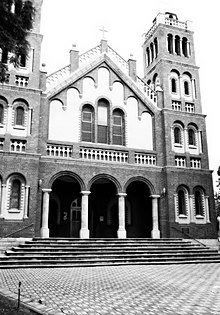 One of the earliest churches established in Polokwane (then Pietersburg) was the "English Church." Prior to 1894, there were occasional services for the English Church held by visiting priests in the local Court House. Work began on building a church in Market Street in 1895. The building was completed in 1897 and Christ Church had a permanent venue. The church struggled with a lack of members during the Anglo-Boer war (Boer Wars) but regular services resumed in November 1901 and have continued to this day. The Anglican church moved from Market Street to Biccard Street in the 1960s. There is also a Roman Catholic church situated in Biccard street.

The Polokwane Cricket Club is one of the oldest in the country and was established in 1902.[35]

The Limpopo Baobabs represents the city as well as the province of Limpopo in the Brutal Fruit Netball Cup. South African Spar Protea goal shooter Lenize Potgieter was also born in Polokwane.

Noordelikes Rugby Club is the largest amateur rugby club based in the city.[36]

Starting in 2013, the city will host a Limpopo provincial team in the Vodacom Cup.[37]

Polokwane has a number of swimming clubs. Former Olympic gold-medalist and world-record swimmer Lyndon Ferns is from the city.

A large tennis club is situated in the city, and various local tournaments are held regularly.

In 2017, Gift Ngoepe, born in then Pietersburg, became the first African player in the Major League Baseball, playing shortstop and second base for the Pittsburgh Pirates. Ngoepe's mother Maureen managed the baseball clubhouse in Randburg, near Johannesburg. Ngoepe's brother Victor also plays in the Pirates' farm system[38] 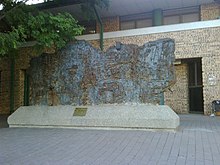 Polokwane provides access to various nature and wildlife viewing opportunities for ecotourists. The Polokwane Bird and Reptile Park is home to over 280 species of birds. The Polokwane Game Reserve houses various South African species of wildlife, birdlife, and plants in an unspoiled bushveld environment. The Moletzie Bird Sanctuary protects rare birds like the Cape vulture. The Modjadji Rainforest near Duiwelskloof holds the largest concentration of indigenous cycads in the world, and Cheune Crocodile Farm provides a place to learn about the life of crocodiles.[33]

An extensive art collection is preserved in Polokwane's art gallery, open to the public. The city has more public sculptures per capita in its parks than elsewhere in South Africa. Polokwane was also the first to unveil a bust of the ex-president Nelson Mandela in its City Square (Civic Gardens), and it was authorised by Nelson Mandela personally.[40]

The city is considered the premier hunting destination in South Africa.[41]

The city hosts several major industries such as Coca-Cola[42], Freshmark (a division of Shoprite Checkers), and South African Breweries.[43] As the capital of the Limpopo province, the city also has a large commercial area with the four largest banks in the country all having at least three branches in the city. The city was well known for its manufacturing facility in Seshego of Tempest radios and hi-fis, the largest employer in the region.

Polokwane is a sister city with:

By 1931, the Pietersburg municipal council had assumed a pseudo-heraldic "coat of arms". The shield depicted a crossed pick and shovel, two crossed wheatsheaves, and the date 1904 surrounded by a rib and bearing the motto Labor omnia vincit. The crest was an ostrich.[47]

A proper coat of arms was designed in the 1960s. It was registered with the Transvaal Provincial Administration in August 1967[48] and at the Bureau of Heraldry in September 1969.[49]

The arms were : Azure, on a fess Argent, between in chief a lion passant Argent, armed and langued Gules, and in base two chevrons humette, and a horseshoe Argent, placed 2 and 1, two cogwheels Gules. In layman's terms, this was a blue shield displaying, from top to bottom, a silver lion with red tongue and claws, a silver stripe bearing two red cogwheels, and two silver chevrons and a horseshoe.

The crest was a golden eagle, and the motto, once again, was Labor omnia vincit.

The Polokwane municipal council registered a new coat of arms at the Bureau in October 2003.[49]

The arms are : Vert, on a fess Argent, a woven grain basket, between two hoes with blades turned inward proper, their handles towards centre-base counterchanged Or and issuant from a voided cogwheel the inner ring cotised Argent, therein a sun Or; on a chief of the last a short-clawed Lark (Mirafra chuana) perched upon a leaf of the silky thorn tree (Acacia rehmanniana) proper, between two demi-peaks with points embattled Brunatre, issuant from the respective shield flanks. In layman's terms, the shield depicts, from top to bottom, (1) a short-clawed lark perched on an acacia leaf between two stylised peaks, (2) a woven grain basket between two hoes on a silver background, and (3) a silver cogwheel on a green background.

Above the shield is a brown rustic crown. The motto is Unity - equity - prosperity.