Infinite Construction - STEAM
Substance or energy damaging to the environment 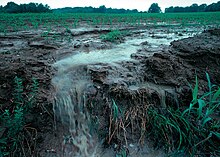 A pollutant is a substance or energy introduced into the environment that has undesired effects, or adversely affects the usefulness of a resource. A pollutant may cause long- or short-term damage by changing the growth rate of plant or animal species, or by interfering with human amenities, comfort, health, or property values. Some pollutants are biodegradable and therefore will not persist in the environment in the long term. However, the degradation products of some pollutants are themselves polluting such as the products DDE and DDD produced from the degradation of DDT.

Different types of pollutants in nature

Notable pollutants include the following groups

Light pollution is the impact that anthropogenic light has on the visibility of the night sky. It also encompasses ecological light pollution which describes the effect of artificial light on individual organisms and on the structure of ecosystems as a whole.

The night sky viewed from Luhasoo bog, Estonia with light pollution in the background.

Pollutants can also be defined by their zones of influence, both horizontally and vertically.[1]

Pollutants can cross international borders and therefore international regulations are needed for their control. The Stockholm Convention on Persistent Organic Pollutants, which entered into force in 2004, is an international legally binding agreement for the control of persistent organic pollutants. Pollutant Release and Transfer Registers (PRTR) are systems to collect and disseminate information on environmental releases and transfers of toxic chemicals from industrial and other facilities.

The European Pollutant Emission Register is a type of PRTR providing access to information on the annual emissions of industrial facilities in the Member States of the European Union, as well as Norway.