Uganda is a presidential republic, in which the President of Uganda is both the head of state and head of government. There is a multi-party system. Executive power is exercised by the government. Legislative power is given to both the government and the National Assembly. The system is based on a democratic parliamentary system with equal rights for all citizens over 18 years of age.

The Economist Intelligence Unit rated Uganda a "hybrid regime" in 2019.[1]

In a measure ostensibly designed to reduce sectarian violence, political parties were restricted in their activities from 1986. In the non-party "Movement" system instituted by President Yoweri Museveni, political parties continued to exist but could not campaign in elections or field candidates directly (although electoral candidates could belong to political parties). A constitutional referendum canceled this 19-year ban on multi-party politics in July 2005.

Presidential elections were held in February 2006. Museveni ran against several candidates, of whom the most prominent was the exiled Dr. Kizza Besigye. Museveni was declared the winner. Besigye alleged fraud, and rejected the result. The Supreme Court of Uganda ruled that the election was marred by intimidation, violence, voter disenfranchisement, and other irregularities. However, the Court voted 4-3 to uphold the results of the election.[2] 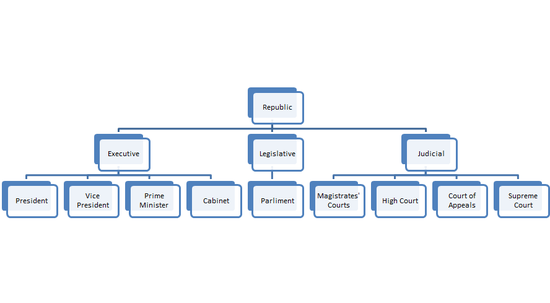 The structure of Uganda's government. 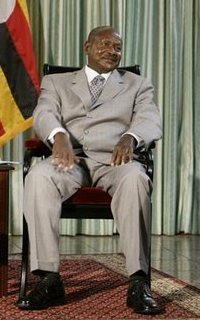 The head of state in Uganda is the President, who is elected by a popular vote to a five-year term. This is currently Yoweri Museveni, who is also the head of the armed forces. The previous presidential elections were in February 2011, and in the election of February 2016, Museveni was elected with 68 percent of the vote. The cabinet is appointed by the president from among the elected legislators. The prime minister, Ruhakana Rugunda, assists the president in the supervision of the cabinet.

The Cabinet of Uganda, according to the Constitution of Uganda, "shall consist of the President, the Vice President and such number of Ministers as may appear to the President to be reasonably necessary for the efficient running of the State."[3][4]

Main articles: List of political parties in Uganda and Elections in Uganda

The Ugandan judiciary operates as an independent branch of government and consists of magistrate's courts, high courts, courts of appeal (which organizes itself as the Constitutional Court of Uganda when hearing constitutional issues), and the Supreme Court. Judges for the High Court are appointed by the president; Judges for the Court of Appeal are appointed by the president and approved by the legislature.

A fight between Ugandan and Libyan presidential guards sparked chaos during a ceremony attended by the heads of state from 11 African nations on March 19, 2008.[6]