Politics of Samoa takes place in a framework of a parliamentary representative democratic state whereby the Prime Minister of Samoa is the head of government. Existing alongside the country's Western styled political system is the fa'amatai chiefly system of socio-political governance and organisation, central to understanding Samoa's political system.

From the country's independence in 1962, only matai could vote and stand as candidates in elections to parliament. In 1990, the voting system was changed by the Electoral Amendment Act which introduced universal suffrage. However, the right to stand for elections remains with matai title holders. Therefore, in the 49-seat parliament, all 47 Samoan Members of Parliament are also matai, performing dual roles as chiefs and modern politicians, with the exception of the two seats reserved for non-Samoans.[1] At the local level, much of the country's civil and criminal matters are dealt with by some 360 village chief councils, Fono o Matai, according to traditional law, a practice further strengthened by the 1990 Village Fono Law.[2]

The national government (malo) generally controls the legislative assembly as it is formed from the party which controls the majority seats in the assembly. Executive power is exercised by the government. Legislative power is vested in the assembly, but the government generally controls legislation through its weight of numbers in the Fono. The Judiciary is independent of the executive and the legislature.

Government Building in the capital Apia housing administrative ministerial offices. On the roof is a modern version of a traditional oval Samoan fale.

The 1960 Constitution, which formally came into force with independence, is based on the British Westminster model of parliamentary democracy, modified to take account of Samoan customs. Two of Samoa's four highest ranking paramount chiefs (Tama a 'Aiga) at the time of independence were given lifetime appointments to jointly hold the office of head of state. Another paramount chief, Fiame Mata'afa Faumuina Mulinu'u II was elected into parliament and became the first Prime Minister of Samoa. Malietoa Tanumafili II held the post of Head of State alone since the death of his colleague, Tupua Tamasese Mea'ole, in 1963. Tanumafili died in May 2007 and his successor, Tupua Tamasese Tupuola Tufuga Efi was elected by the legislature for a five-year term in June 2007. At the time the Constitution was adopted it was anticipated that future Heads of State would be chosen from among the four Tama-a-Aiga 'royal' paramount chiefs. However, this is not required by the Constitution and for this reason Samoa can be considered a republic rather than a constitutional monarchy like the United Kingdom. Parliament (the Fono) can also amend the constitution through a simple majority of votes in the house.

The Samoa system is very hard model of parliamentary democracy where the executive and the legislative arms of government are fused together. The prime minister is chosen by a majority in the Fono and is appointed by the head of state to form a government. The prime minister's preferred cabinet of 12 is appointed and sworn in by the head of state, subject to the continuing confidence of the Fono, which since the rise of political parties in Samoa in the 1980s, is controlled by the party with the majority of members in the Fono (the government).

The unicameral legislature, named the Fono Aoao Faitulafono (National Legislative Assembly) contains 49 members serving five-year terms. Forty-seven are elected from ethnic Samoan territorial constituencies; the other two are chosen by the Samoan citizens of non-Samoan origin on a separate electoral roll. Universal suffrage was extended in 1990, but only chiefs (matai) may stand for election to the Samoan seats. There are more than 25,000 matai in the country, about 5% of whom are women.

The third Tamaaiga id Tuimalealiifano who was the deputy Head of State or a member of the Council of Deputies when Samoa gained its independence in 1962.

Perhaps the most important court in Samoa is the Land and Titles court, consisting of cultural and judicial experts appointed by the supreme court. This court hears village land and title succession disputes. The court derives from the Native Land and Titles Court put in place under the German colonial administration in 1901. Samoa's political stability is thought to be due in large part to the success of this court in hearing disputes. 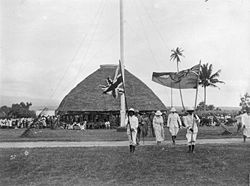 From independence until the 1970s, Fono debate was conducted in the typical 'consensus' style manner of the faamatai system in the villages. This meant due deference was usually shown to the Tama-a-Aiga within parliament (the highest ranking chiefs in the nation). Debate usually ended up with the members supporting the then Tama-a-Aiga prime minister or other highly ranked chiefs in the house. Fiame Mataafa Mulinuu II was re-elected as Prime Minister unopposed for most of the period between 1962 and 1975. There were no political parties in these consensus-style parliaments of the 1960s and early 1970s. In the 1970-73 parliament, the first woman speaker of the Fono was chosen - Leaupepe Faima'ala.

However, rising competition and differences in views between MPs in the 1970s led to the establishment of the first political party - the Human Rights Protection Party (HRPP) in 1979. The 1978 election was the first time a non-Tama-a-Aiga was chosen as Prime Minister. The election of Tupuola Efi to the prime ministership by his supporters was met with staunch opposition from various quarters of the Fono and caused huge controversy at the time because he had defeated a Tama-a-Aiga candidate. The HRPP was set up in part to oppose the then Prime Minister, Tupuola Efi, and also to demand greater rights for farmers. One of the founding members was Va'ai Kolone - a famous farmer turned politician from the rural Savaii constituency of Vaisigano. Tui Atua Tupua Tamasese Efi eventually became Head of State in 2007 under his Tafaifa title TuiAtua and Tama-a-Aiga titles Tupua Tamasese.

Since 1982, the majority party in the Fono has been the HRPP, save for a short period in 1985 when Vaai Kolone leading a coalition of parties won the election but had to resign as MPs crossed the floor to the HRPP. Tofilau Eti Alesana regained the Prime Ministership after Vaai resigned. HRPP leader Tofilau Eti Alesana served as prime minister for nearly all of the period between 1982 and 1998, when he resigned due to health reasons. Tofilau Eti was replaced by his deputy, Tuila'epa Sailele Malielegaoi.

Parliamentary elections were held in March 2001. The Human Rights Protection Party, led by Tuila'epa Sailele Malielegaoi, won 30 of the 49 seats in the current Fono. The Samoa Democratic United Party, led by Le Mamea Ropati, is the main opposition. Other political parties are the Samoa Party, the Christian Party, and the Samoa Progressive Political Party.

The March 2006 elections were again won by the HRPP by an even larger margin than 2001. The HRPP won 32 seats to the SDUP's 10, with a third major party - the Samoa Party - not gaining any. The majority of independents joined the HRPP to increase the party's majority to 39 seats in the 49 seat parliament.

Internal SDUP infighting led to the party's parliamentary members splitting. Leader Le Mamea Ropati was ousted in a coup led by deputy leader Asiata Dr Saleimoa Vaai, who then assumed leadership of the SDUP. Le Mamea and supporters became independents and thus reduced the SDUP's MPs to only 7. This was not enough to be formally recognised in the Fono as an official opposition party (they needed at least 8 MPs). Therefore, there is no official opposition party recognised in the Samoan parliament at present.

The Samoa Democratic United Party (formed after the 2001 elections) bringing together the Samoa National Development Party and the Samoa Independent Party) is led by the long serving Member of Parliament, Hon. Le Mamea Ropati Mualia. Other parties include(d) the Samoan Progressive Conservative Party, the Samoa All People's Party, and the Samoa Liberal Party.

Samoa is divided in 11 districts: