The political system of Iceland.

The politics of Iceland take place in the framework of a parliamentary representative democratic republic, whereby the president is the head of state, while the prime minister of Iceland serves as the head of government in a multi-party system. Executive power is exercised by the government. Legislative power is vested in both the government and the parliament, the Althingi. The judiciary is independent of the executive and the legislature.

The Economist Intelligence Unit rated Iceland a "full democracy" in 2019.[2]

Elected to a four-year term, the President has limited powers and is poised in a largely ceremonial office that serves as a diplomat and figurehead.

The prime minister and cabinet exercise most executive functions. The head of government is the prime minister, who, together with the cabinet, takes care of the executive part of government. The cabinet is appointed by the president after general elections to Althing; however, this process is usually conducted by the leaders of the political parties, who decide among themselves after discussions which parties can form the cabinet and how its seats are to be distributed (under the condition that it has a majority support in Althing). Only when the party leaders are unable to reach a conclusion by themselves in reasonable time does the president exercise this power and appoint the cabinet themselves. This has never happened since the republic was founded in 1944, but in 1942 the regent of the country (Sveinn Björnsson, who had been installed in that position by the Althing in 1941) did appoint a non-parliamentary government. The regent had, for all practical purposes, the position of a president, and Sveinn in fact became the country's first president in 1944. The governments of Iceland have almost always been coalitions with two or more parties involved, because no single political party has received a majority of seats in the Althing during Iceland's republican period. The extent of the political powers possessed by the office of the president are disputed by legal scholars in Iceland; several provisions of the constitution appear to give the president some important powers but other provisions and traditions suggest differently.

The modern parliament, called "Althing" or "Alþingi", was founded in 1845 as an advisory body to the Danish king. It was widely seen as a reestablishment of the assembly founded in 930 in the Commonwealth period and suspended in 1799. The Althing is composed of 63 members, elected every 4 years unless it is dissolved sooner. Suffrage for presidential and parliamentary elections is 18 years of age and is universal. Members of the Althing are elected on the basis of proportional representation from six constituencies. Until 1991, membership of the Althing was divided between a lower and upper house but this was changed to a fully unicameral system.

After four four-year terms as the world's first elected woman president, the widely popular Vigdís Finnbogadóttir chose not to run for re-election in 1996.[3] More than 86% of voters turned out in the June 29, 1996 presidential elections to give former leftist party chairman Ólafur Ragnar Grímsson a 41% plurality and relatively comfortable 12% victory margin over the closest of three other candidates. Traditionally limited to 6–12 weeks, Iceland's campaign season was marked by several intensely personal attacks on Ólafur Ragnar, a former finance minister who tried to erase memories of his controversial support of inflationary policies and opposition to the U.S. military presence at the NATO base in Keflavík. Ólafur Ragnar successfully had used his largely ceremonial office to promote Icelandic trade abroad and family values at home.

The next presidential elections will be held in June 2020.

The last parliamentary elections took place on October 28, 2017. The ruling government was three-party coalition government which collapsed after the departure of Bright Future. The Independence Party retained its position as the Althing's largest party.[4] and the Independence Party, the Left-Green Movement and the Progressive Party formed a coalition government. A total of 201,777 votes were cast constituting 81.2% of the 248,502 electorates.

The results of the 2017 election were as follows: 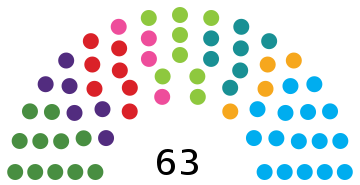 In losing four seats in the April 1995 parliamentary elections, the IP and SDP (so called Viðey government) mustered a simple majority in the 63-seat Althing. However, Prime Minister and IP leader Davíð Oddsson chose the resurgent Progressive Party (PP) as a more conservative partner to form a stronger and more stable majority with 40 seats. Splintered by factionalism over the economy and Iceland's role in the European Union (EU), the SDP also suffered from being the only party to support Iceland's EU membership application.

The beginning of the millennium saw a merger of all the left parties to form the Social Democratic Alliance. Some members chose to join another new left party instead, the Left-Green Movement. After the PP's loss in the 2007 elections its longstanding alliance with the IP ended despite still being able to form a majority. Instead the IP's leader Geir Haarde chose a stronger but somewhat unstable coalition with the Social Democrats (the Þingvellir government).

Geir's administration fell apart in January 2009 and he called for an early election before standing down as party leader. The Social Democrats subsequently formed an interim government with the LGM. In the resulting election, Jóhanna Sigurðardóttir's administration prevailed, the first time Icelanders voted for a majority left-wing government.

After the 2008 financial crisis, there has been an increasing fractionalization of the Icelandic party system. The increase in the number of parties has made it harder for coalition governments to form.[5] What's more, since the initial resignation of the government in January 2009 after the banking collapse, revelations of subsequent political scandals have resulted in the government collapsing in 2016, following the Panama Papers, and again in 2017, following revelations of impropriety within the ranks of the political class; both instances culminated in anti-government protests being staged.[6] Organized protests held to highlight and challenge political corruption since 2008 have therefore come to stress the necessity for the new Icelandic constitution that was co-drafted by the 2009 leftist government and select members of the public to be enshrined into law.[7]

The judiciary consists of the Supreme Court (Hæstiréttur) and district courts. Justices are appointed for life by the minister of justice. The constitution protects the judiciary from infringement by the other two branches.