Politics of Botswana takes place in a framework of a parliamentary representative democratic republic, whereby the President of Botswana is both head of state and head of government, and of a multi-party system. Executive power is exercised by the government. Legislative power is vested in both the government and the Parliament of Botswana. The party system has been dominated by the Botswana Democratic Party (BDP), which has never lost power since independence. The Judiciary is independent of the executive and the legislature.

Botswana is formally a multiparty constitutional democracy. Each of the elections since independence in September 1966 has been freely and fairly contested and has been held on schedule. The country's small white minority and other minorities participate freely in the political process. There are two main rival parties and a number of smaller parties. General elections are held at least every five years.[1]

The Economist Intelligence Unit rated Botswana a "flawed democracy" in 2019.[2] The Botswana Democratic Party has ruled Botswana since gaining independence from the United Kingdom in 1966.[3] 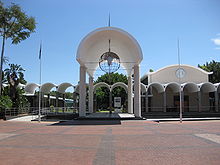 The National Assembly has 57 elected and 4 appointed members;[4] it is expanded following each census (every 10 years). After elections, the party that wins the majority elects the State President. The President then appoints the Vice President, but the appointment is subject to endorsement by the National Assembly.

There are 57 parliamentary constituencies in Botswana.[5]

The advisory House of Chiefs represents the eight principal subgroups of the Batswana people, and four other members are elected by the subchiefs of four of the districts. A draft of any National Assembly bill of tribal concern must be referred to the House of Chiefs for advisory opinion. Chiefs and other leaders preside over customary, traditional courts, though all persons have the right to request that their case be considered under the formal British-based legal system.[6]

Local government is administered by nine district councils and five town councils. District commissioners have executive authority and are appointed by the central government and assisted by elected and nominated district councilors and district development committees. There has been ongoing debate about the political, social, and economic marginalization of the San (Bushmen). The government's policies for remote area dwellers continue to spark controversy and may be revised in response to domestic and donor concerns.[citation needed]

Judges are appointed by the president and may be removed only for cause and after a hearing.

Judgments of the Botswana Court of Appeal

Judgments of the Botswana High Court