The Regional Government (Giunta Regionale) is presided by the President of the Region (Presidente della Regione), who is elected for a five-year term, and is composed by the President and the Ministers (Assessori), who are currently ten.[1]

The Regional Council of Apulia (Consiglio Regionale della Puglia) is composed of 70 members and is elected with proportional representation plus a majority premium for the winning coalition.[2] The Council is elected for a five-year term, but, if the President suffers a vote of no confidence, resigns or dies, under the simul stabunt vel simul cadent clause (introduced in 1999), also the Council will be dissolved and there will be a fresh election.[3] 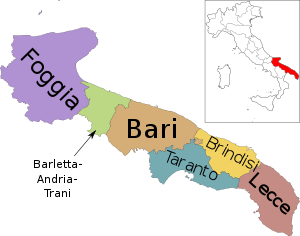 Apulia is divided into five provinces and one metropolitan city:

Apulia is also divided into 258 comuni (municipalities), which have even more history, having been established in the Middle Ages when they were the main places of government. There are eight provincial capital cities in Apulia, as the Province of Barletta-Andria-Trani is the only province in Italy with three capital cities.

Other municipalities with more than 50,000 inhabitants

Main articles: List of political parties in Apulia and Elections in Apulia

In the latest regional election, which took place on 31 May 2015, Michele Emiliano of the Democratic Party was elected president by a landslide over a fragmented set of opponents. The Democrats were narrowly the largest party with 19.8% of the vote, but two lists named after Emiliano got an additional combined 14.0%.