Presidential campaign button for Abraham Lincoln, 1860. The reverse side of the button shows a portrait of his running mate Hannibal Hamlin.

A political campaign is an organized effort which seeks to influence the decision making progress within a specific group. In democracies, political campaigns often refer to electoral campaigns, by which representatives are chosen or referendums are decided. In modern politics, the most high-profile political campaigns are focused on general elections and candidates for head of state or head of government, often a president or prime minister. 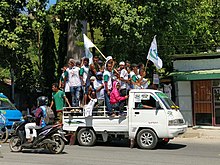 The message of the campaign contains the ideas that the candidate wants to share with the voters. It is to get those who agree with their ideas to support them when running for a political position. The message often consists of several talking points about policy issues. The points summarize the main ideas of the campaign and are repeated frequently in order to create a lasting impression with the voters. In many elections, the opposition party will try to get the candidate "off message" by bringing up policy or personal questions that are not related to the talking points. Most campaigns prefer to keep the message broad in order to attract the most potential voters. A message that is too narrow can alienate voters or slow the candidate down with explaining details. For example, in the 2008 American presidential election John McCain originally used a message that focused on his patriotism and political experience: "Country First"; later the message was changed to shift attention to his role as "The Original Maverick" within the political establishment. Barack Obama ran on a consistent, simple message of "change" throughout his campaign.

Fundraising techniques include having the candidate call or meet with large donors, sending direct mail pleas to small donors, and courting interest groups who could end up spending millions on the race if it is significant to their interests.

In a modern political campaign, the campaign organization (or "machine") will have a coherent structure of personnel in the same manner as any business of similar size.

Successful campaigns usually require a campaign manager to coordinate the campaign's operations. Apart from a candidate, they are often a campaign's most visible leader. Modern campaign managers may be concerned with executing strategy rather than setting it - particularly if the senior strategists are typically outside political consultants such as primarily pollsters and media consultants.

Political consultants advise campaigns on virtually all of their activities, from research to field strategy. Consultants conduct candidate research, voter research, and opposition research for their clients.

Activists are the "foot soldiers" loyal to the cause, the true believers who will carry the run by volunteer activists. Such volunteers and interns may take part in activities such as canvassing door-to-door and making phone calls on behalf of the campaigns.

A campaign team (which may be as small as one inspired individual, or a heavily resourced group of professionals) must consider how to communicate the message of the campaign, recruit volunteers, and raise money. Campaign advertising draws on techniques from commercial advertising and propaganda, also entertainment and public relations, a mixture dubbed politainment. The avenues available to political campaigns when distributing their messages is limited by the law, available resources, and the imagination of the campaigns' participants. These techniques are often combined into a formal strategy known as the campaign plan. The plan takes account of a campaign's goal, message, target audience, and resources available. The campaign will typically seek to identify supporters at the same time as getting its message across. The modern, open campaign method was pioneered by Aaron Burr during the American presidential election of 1800.[1][2][3]

Campaign advertising is the use of paid media (newspapers, radio, television, etc.) to influence the decisions made for and by groups. These ads are designed by political consultants and the campaign's staff.

The public media (in US parlance "free media" or "earned media") may run the story that someone is trying to get elected or to do something about certain aspects regarding their specific country.

Modern technology and the internet

The internet is now a core element of modern political campaigns. Communication technologies such as e-mail, websites, and podcasts for various forms of activism enable faster communications by citizen movements and deliver a message to a large audience. These Internet technologies are used for cause-related fundraising, lobbying, volunteering, community building, and organizing. Individual political candidates are also using the internet to promote their election campaign. In a study of Norwegian election campaigns, politicians reported they used social media for marketing and for dialogue with voters. Facebook was the primary platform for marketing and Twitter was used for more continuous dialogue.[4]

A husting, or the hustings, was originally a physical platform from which representatives presented their views or cast votes before a parliamentary or other election body. By metonymy, the term may now refer to any event, such as debates or speeches, during an election campaign where one or more of the representative candidates are present. 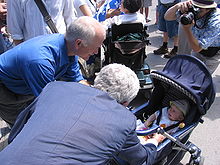 An informational campaign is a political campaign designed to raise public awareness and support for the positions of a candidate (or her/his party).[11] It is more intense than a paper campaign, which consists of little more than filing the necessary papers to get on the ballot, but is less intense than a competitive campaign, which aims to actually win election to the office. An informational campaign typically focuses on low-cost outreach such as news releases, getting interviewed in the paper, making a brochure for door to door distribution, organizing poll workers, etc.[12]

A paper campaign is a political campaign in which the candidate only files the necessary paperwork to appear on the ballot.[13][14] The purpose of such a token effort may be simply to increase name awareness of a minor political party or to give voters of a certain ideology an opportunity to vote accordingly. It can be a cost-effective means of attracting media coverage. An informational campaign, by contrast, may involve news releases, newspaper interviews, door-to-door campaigning, and organizing polls. As the level of seriousness rises, the marginal cost of reaching more people rises accordingly, due to the high cost of TV commercials, paid staff, etc. which are used by competitive campaigns.[15]

A large body of political science research emphasizes how "fundamentals" - the state of the economy, whether the country is at war, how long the president's party has held the office.

A consensus in the political science literature holds that national conventions usually have a measurable effect on presidential elections that is relatively resistant to decay.[23][24][25]

Research is mixed on the precise impact of debates.[23][25][27] Rather than encourage viewers to update their political views in accordance with the most persuasive arguments, viewers instead update their views to merely reflect what their favored candidate is saying.[28]

Traditional ground campaigning and voter contacts remain the most effective strategies.[26][31] Some research suggests that knocking on doors can increase turnout by as much as 10%[32] and phone calls by as much as 4%.[33] One study suggests that lawn signs increase vote share by 1.7 percentage points.[34] A review of more than 200 get-out-the-vote experiments finds that the most effective tactics are personal: Door-to-door canvassing increases turnout by an average of about 2.5 percentage points; volunteer phone calls raise it by about 1.9 points, compared to 1.0 points for calls from commercial phone banks; automated phone messages are ineffective.[35][36] Each field office that the Obama campaign opened in 2012 gave him approximately a 0.3% greater vote share.[37] The Obama 2008 campaign's use of field most offices has been credited as crucial in winning Indiana and North Carolina.[38] According to one study, the cost per vote by having a field office is $49.40.[38] Using out-of-state volunteers for canvassing is less effective in increasing turnout than using local and trained volunteers.[39][40]

Political science research generally finds negative advertisement (which has increased over time)[41] to be ineffective both at reducing the support and turnout for the opponent.[42] According to political scientists Stephen Ansolabehere and Shanto Iyengar, negative ads do succeed at driving down overall turnout though.[43] They also find that "negative ads work better for Republicans than for Democrats, and better for men than for women; unfortunately, negative ads also work better in general than positive ones."[43] Challengers who spend more time campaigning get a higher vote share against incumbents in state house elections.[44] According to political scientist Lynn Vavreck, "the evidence suggests that campaign ads have small effects that decay rapidly — very rapidly — but just enough of the impact accumulates to make running more advertising than your opponent seem a necessity."[45] A 2019 study of online political advertising conducted by a party in the 2016 Berlin state election campaign found that the online-ad campaign "increased the party's vote share by 0.7 percentage points" and that factual ads were more effective than emotional ads.[46]

According to political scientists Donald Green and Alan Gerber, it costs $31 to produce a vote going door to door, $91-$137 to produce a vote by sending out direct mailers, $47 per vote from leafletting, $58-$125 per vote from commercial phone banking, and $20-$35 per vote from voluntary phone banking.[47] A 2018 study in the American Economic Review found that door-to-door canvassing on behalf of the Francois Hollande campaign in the 2012 French presidential election "did not affect turnout, but increased Hollande's vote share in the first round and accounted for one fourth of his victory margin in the second. Visits' impact persisted in later elections, suggesting a lasting persuasion effect."[48] According to a 2018 study, repeated get-out-the-vote phone calls had diminishing effects but each additional phone call increased the probability to vote by 0.6-1.0 percentage points.[49] Another 2018 study found that "party leaflets boost turnout by 4.3 percentage points while canvassing has a small additional effect (0.6 percentage points)" in a United Kingdom election.[50]

A 2016 study found that visits by candidate visits to states have modest effects: "visits are most effective in influencing press coverage at the national level and within battleground states. Visits’ effects on voters themselves, however, are much more modest than consultants often claim, and visits appear to have no effects outside the market that hosts a visit."[51] The authors of the study argue that it would be more effective for campaigns to go to the pockets of the country where wealthy donors are (for fundraising) and hold rallies in the populous states both to attract national press and raise funds.[51] A 2005 study found that campaign visits had no statistically significant effect, after controlling for other factors, on voter turnout in the 1992, 1996, and 2000 elections.[52] On the other hand, a 2017 paper of the 1948 presidential election provides "strong evidence that candidate visits can influence electoral returns".[53] Other research also provides evidence that campaign visits increase vote share.[54]

According to a 2020 study, campaign spending on messaging to voters affects voter support for candidates.[55] Another 2020 study found that political advertising had small effects regardless of context, message, sender, and receiver.[56]

Political campaigns have existed as long as there have been informed citizens to campaign amongst. Democratic societies have regular election campaigns, but political campaigning can occur on particular issues even in non-democracies so long as freedom of expression is allowed. Often mass campaigns are started by the less privileged or anti-establishment viewpoints (as against more powerful interests whose first resort is lobbying). The phenomenon of political campaigns are tightly tied to lobby groups and political parties.

The first modern campaign is often described as William Ewart Gladstone's Midlothian campaign in 1878-80, although there may be earlier recognizably modern examples from the 19th century. The 1896 William McKinley presidential campaign laid the groundwork for modern campaigns.[57][58]

In the 1790-1820s, the Federalist Party and the Democratic-Republican Party battled it out in the so-called "First Party System". American election campaigns in the 19th century created the first mass-base political parties and invented many of the techniques of mass campaigning.[citation needed]