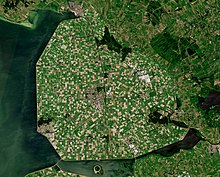 listen)) is a low-lying tract of land that forms an artificial hydrological entity, enclosed by embankments known as dikes. The three types of polder are:

The ground level in drained marshes subsides over time. All polders will eventually be below the surrounding water level some or all of the time. Water enters the low-lying polder through infiltration and water pressure of groundwater, or rainfall, or transport of water by rivers and canals. This usually means that the polder has an excess of water, which is pumped out or drained by opening sluices at low tide. Care must be taken not to set the internal water level too low. Polder land made up of peat (former marshland) will sink in relation to its previous level, because of peat decomposing when exposed to oxygen from the air.

Polders are at risk from flooding at all times, and care must be taken to protect the surrounding dikes. Dikes are typically built with locally available materials, and each material has its own risks: sand is prone to collapse owing to saturation by water; dry peat is lighter than water and potentially unable to retain water in very dry seasons. Some animals dig tunnels in the barrier, allowing water to infiltrate the structure; the muskrat is known for this activity and hunted in certain European countries because of it. Polders are most commonly, though not exclusively, found in river deltas, former fenlands, and coastal areas.

Flooding of polders has also been used as a military tactic in the past. One example is the flooding of the polders along the Yser River during World War I. Opening the sluices at high tide and closing them at low tide turned the polders into an inaccessible swamp, which allowed the Allied armies to stop the German army.

The Dutch word polder derives successively from Middle Dutch polre, from Old Dutch polra, and ultimately from pol-, a piece of land elevated above its surroundings, with the augmentative suffix -er and epenthetical -d-. The word has been adopted in thirty-six languages.[1]

Polders and the Netherlands

Pumping station in Zoetermeer, the Netherlands: The polder lies lower than the surrounding water on the other side of the dike. The Archimedes' screws are clearly visible.

The Netherlands is frequently associated with polders, as its engineers became noted for developing techniques to drain wetlands and make them usable for agriculture and other development. This is illustrated by the saying "God created the world, but the Dutch created the Netherlands".[2]

The Dutch have a long history of reclamation of marshes and fenland, resulting in some 3,000 polders[3] nationwide. By 1961, about half of the country's land, 18,000 square kilometres (6,800 sq mi), was reclaimed from the sea.[4] About half the total surface area of polders in north-west Europe is in the Netherlands. The first embankments in Europe were constructed in Roman times. The first polders were constructed in the 11th century. The oldest stil existing polder is the Achtermeer polder, from 1533.

As a result of flooding disasters, water boards called waterschap (when situated more inland) or hoogheemraadschap (near the sea, mainly used in the Holland region)[5] [6] were set up to maintain the integrity of the water defences around polders, maintain the waterways inside a polder, and control the various water levels inside and outside the polder. Water boards hold separate elections, levy taxes, and function independently from other government bodies. Their function is basically unchanged even today. As such, they are the oldest democratic institutions in the country. The necessary cooperation among all ranks to maintain polder integrity gave its name to the Dutch version of third-way politics—the Polder Model.

The 1953 flood disaster prompted a new approach to the design of dikes and other water-retaining structures, based on an acceptable probability of overflowing. Risk is defined as the product of probability and consequences. The potential damage in lives, property, and rebuilding costs is compared with the potential cost of water defences. From these calculations follows an acceptable flood risk from the sea at one in 4,000–10,000 years, while it is one in 100–2,500 years for a river flood. The particular established policy guides the Dutch government to improve flood defences as new data on threat levels become available.

Bangladesh has 123 polders, of which 49 are sea-facing, while the rest are along the numerous distributaries of the Ganges-Brahmaputra-Meghna River delta. These were constructed in the 1960s to protect the coast from tidal flooding and reduce salinity incursion.[7] They reduce long-term flooding and waterlogging following storm surges from tropical cyclones. They are also cultivated for agriculture.[8]

The Jiangnan region, at the Yangtze River Delta, has a long history of constructing polders. Most of these projects were performed between the 10th and 13th centuries.[10] The Chinese government also assisted local communities in constructing dikes for swampland water drainage.[11] The Lijia (里甲) self-monitoring system of 110 households under a lizhang (里长) headman was used for the purposes of service administration and tax collection in the polder, with a liangzhang (粮长, grain chief) responsible for maintaining the water system and a tangzhang (塘长, dike chief）for polder maintenance.[12]

In Germany, land reclaimed by dyking is called a koog. The German Deichgraf system was similar to the Dutch and is widely known from Theodor Storm's novella The Rider on the White Horse.

In southern Germany, the term polder is used for retention basins recreated by opening dikes during river floodplain restoration, a meaning somewhat opposite to that in coastal context.