Polarization density also describes how a material responds to an applied electric field as well as the way the material changes the electric field, and can be used to calculate the forces that result from those interactions. It can be compared to magnetization, which is the measure of the corresponding response of a material to a magnetic field in magnetism. The SI unit of measure is coulombs per square meter, and polarization density is represented by a vector P.[2]

For a certain volume element

in the material, which carries a dipole moment

, we define the polarization density P:

In general, the dipole moment

This definition of polarization density as a "dipole moment per unit volume" is widely adopted, though in some cases it can lead to ambiguities and paradoxes.[5]

Let a volume dV be isolated inside the dielectric. Due to polarization the positive bound charge

will be displaced a distance

relative to the negative bound charge

, giving rise to a dipole moment

. Substitution of this expression in (1) yields

bounded in the volume dV is equal to

the equation for P becomes:[3]

is the density of the bound charge in the volume under consideration. It is clear from the definition above that the dipoles are overall neutral, that

is balanced by an equal density of the opposite charge within the volume. Charges that are not balanced are part of the free charge discussed below.

Gauss's law for the field of P

For a given volume V enclosed by a surface S, the bound charge

inside it is equal to the flux of P through S taken with the negative sign, or

By the divergence theorem, Gauss's law for the field P can be stated in differential form as:

Relationship between the fields of P and E 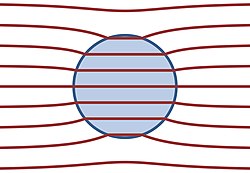 Field lines of the D-field in a dielectric sphere with greater susceptibility than its surroundings, placed in a previously-uniform field.[6] The field lines of the E-field are not shown: These point in the same directions, but many field lines start and end on the surface of the sphere, where there is bound charge. As a result, the density of E-field lines is lower inside the sphere than outside, which corresponds to the fact that the E-field is weaker inside the sphere than outside.

In a homogeneous, linear, non-dispersive and isotropic dielectric medium, the polarization is aligned with and proportional to the electric field E:[7]

where ε0 is the electric constant, and χ is the electric susceptibility of the medium. Note that in this case χ simplifies to a scalar, although more generally it is a tensor. This is a particular case due to the isotropy of the dielectric.

Taking into account this relation between P and E, equation (3) becomes:[3]

The expression in the integral is Gauss's law for the field E which yields the total charge, both free

Since within a homogeneous dielectric there can be no free charges

, by the last equation it follows that there is no bulk bound charge in the material

. And since free charges can get as close to the dielectric as to its topmost surface, it follows that polarization only gives rise to surface bound charge density (denoted

to avoid ambiguity with the volume bound charge density

may be related to P by the following equation:[8]

is the normal vector to the surface S pointing outwards. (see charge density for the rigorous proof)

The class of dielectrics where the polarization density and the electric field are not in the same direction are known as anisotropic materials.

This relation shows, for example, that a material can polarize in the x direction by applying a field in the z direction, and so on. The case of an anisotropic dielectric medium is described by the field of crystal optics.

As in most electromagnetism, this relation deals with macroscopic averages of the fields and dipole density, so that one has a continuum approximation of the dielectric materials that neglects atomic-scale behaviors. The polarizability of individual particles in the medium can be related to the average susceptibility and polarization density by the Clausius–Mossotti relation.

In general, the susceptibility is a function of the frequency ω of the applied field. When the field is an arbitrary function of time t, the polarization is a convolution of the Fourier transform of χ(ω) with the E(t). This reflects the fact that the dipoles in the material cannot respond instantaneously to the applied field, and causality considerations lead to the Kramers–Kronig relations.

If the polarization P is not linearly proportional to the electric field E, the medium is termed nonlinear and is described by the field of nonlinear optics. To a good approximation (for sufficiently weak fields, assuming no permanent dipole moments are present), P is usually given by a Taylor series in E whose coefficients are the nonlinear susceptibilities:

is the linear susceptibility,

is the second-order susceptibility (describing phenomena such as the Pockels effect, optical rectification and second-harmonic generation), and

is the third-order susceptibility (describing third-order effects such as the Kerr effect and electric field-induced optical rectification).

In ferroelectric materials, there is no one-to-one correspondence between P and E at all because of hysteresis.

Relations between E, D and P

is the total charge density. By considering the relationship of each of the terms of the above equation to the divergence of their corresponding fields (of the electric displacement field D, E and P in that order), this can be written as:[9]

This is known as the constitutive equation for electric fields. Here ε0 is the electric permittivity of empty space. In this equation, P is the (negative of the) field induced in the material when the "fixed" charges, the dipoles, shift in response to the total underlying field E, whereas D is the field due to the remaining charges, known as "free" charges.[5][10]

In general, P varies as a function of E depending on the medium, as described later in the article. In many problems, it is more convenient to work with D and the free charges than with E and the total charge.[1]

Therefore, a polarized medium, by way of Green's Theorem can be split into four components.

When the polarization density changes with time, the time-dependent bound-charge density creates a polarization current density of 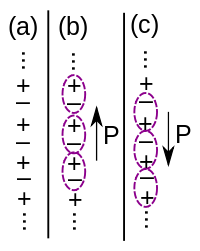 The polarization inside a solid is not, in general, uniquely defined: It depends on which electrons are paired up with which nuclei.[11] (See figure.) In other words, two people, Alice and Bob, looking at the same solid, may calculate different values of P, and neither of them will be wrong. Alice and Bob will agree on the microscopic electric field E in the solid, but disagree on the value of the displacement field

. They will both find that Gauss's law is correct (

), but they will disagree on the value of

On the other hand, even though the value of P is not uniquely defined in a bulk solid, variations in P are uniquely defined.[11] If the crystal is gradually changed from one structure to another, there will be a current inside each unit cell, due to the motion of nuclei and electrons. This current results in a macroscopic transfer of charge from one side of the crystal to the other, and therefore it can be measured with an ammeter (like any other current) when wires are attached to the opposite sides of the crystal. The time-integral of the current is proportional to the change in P. The current can be calculated in computer simulations (such as density functional theory); the formula for the integrated current turns out to be a type of Berry's phase.[11]

The non-uniqueness of P is not problematic, because every measurable consequence of P is in fact a consequence of a continuous change in P.[11] For example, when a material is put in an electric field E, which ramps up from zero to a finite value, the material's electronic and ionic positions slightly shift. This changes P, and the result is electric susceptibility (and hence permittivity). As another example, when some crystals are heated, their electronic and ionic positions slightly shift, changing P. The result is pyroelectricity. In all cases, the properties of interest are associated with a change in P.

Another problem in the definition of P is related to the arbitrary choice of the "unit volume", or more precisely to the system's scale.[5] For example, at microscopic scale a plasma can be regarded as a gas of free charges, thus P should be zero. On the contrary, at a macroscopic scale the same plasma can be described as a continuous medium, exhibiting a permittivity