Advertisement - You can get this game from STEAM
This article is about polar ice caps in general. For Earth's ice cap, see Arctic ice pack.
"Polar ice" redirects here. For the vodka, see Polar Ice (vodka). 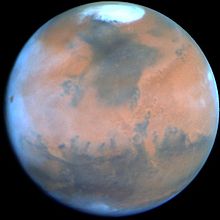 Polar ice cap on Mars, seen by the Hubble Telescope

A polar ice cap or polar cap is a high-latitude region of a planet, dwarf planet, or natural satellite that is covered in ice.[1]

There are no requirements with respect to size or composition for a body of ice to be termed a polar ice cap, nor any geological requirement for it to be over land, but only that it must be a body of solid phase matter in the polar region. This causes the term "polar ice cap" to be something of a misnomer, as the term ice cap itself is applied more narrowly to bodies that are over land, and cover less than 50,000 km2: larger bodies are referred to as ice sheets.

The composition of the ice will vary. For example, Earth's polar caps are mainly water ice, whereas Mars's polar ice caps are a mixture of solid carbon dioxide and water ice.

Earth's polar caps have changed dramatically over the last 12,000 years. Seasonal variations of the ice caps takes place due to varied solar energy absorption as the planet or moon revolves around the Sun. Additionally, in geologic time scales, the ice caps may grow or shrink due to climate variation.

Earth's North Pole is covered by floating pack ice (sea ice) over the Arctic Ocean. Portions of the ice that do not melt seasonally can get very thick, up to 3–4 meters thick over large areas, with ridges up to 20 meters thick. One-year ice is usually about 1 meter thick. The area covered by sea ice ranges between 9 and 12 million km2. In addition, the Greenland ice sheet covers about 1.71 million km2 and contains about 2.6 million km³ of ice. When the ice breaks off (calves) it forms icebergs scattered around the northern Atlantic.[2]

According to the National Snow and Ice Data Center, "since 1979, winter Arctic ice extent has decreased about 4.2 percent per decade". Both 2008 and 2009 had a minimum Arctic sea ice extent somewhat above that of 2007. At other times of the year the ice extent is still sometimes near the 1979–2000 average, as in April 2010, by the data from the National Snow and Ice Data Center.[3] Still, between these same years, the overall average ice coverage appears to have declined from 8 million km2 to 5 million km2. 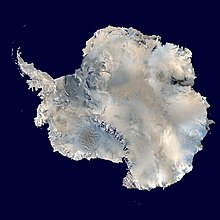 A satellite composite image of Antarctica

Earth's south polar land mass, Antarctica, is covered by the Antarctic ice sheet. It covers an area of about 14.6 million km2 and contains between 25 and 30 million km3 of ice. Around 70% of the fresh water on Earth is contained in this ice sheet.

Data from the National Snow and Ice Data Center shows that the sea ice coverage of Antarctica has a slightly positive trend over the last three decades (1979–2009).[4]

The current rate of decline of the ice caps has caused many investigations and discoveries on glacier dynamics and their influence on the world's climate. In the early 1950s, scientists and engineers from the US Army began drilling into polar ice caps for geological insight. These studies resulted in “nearly forty years of research experience and achievements in deep polar ice core drillings... and established the fundamental drilling technology for retrieving deep ice cores for climatologic archives.” [6] Polar ice caps have been used to track current climate patterns but also patterns over the past several thousands years from the traces of CO2 and CH4 found trapped in the ice. In the past decade, polar ice caps have shown their most rapid decline in size with no true sign of recovery.[7] Josefino Comiso, a senior research scientist at NASA, found that the “rate of warming in the Arctic over the last 20 years is eight times the rate of warming over the last 100 years.”[8] In September 2012, sea ice reached its smallest size ever. Journalist John Vidal stated that sea ice is "700,000 sq km below the previous minimum of 4.17m sq km set in 2007".[9] In August 2013, Arctic sea ice extent averaged 6.09m km2, which represents 1.13 million km2 below the 1981–2010 average for that month.[10] 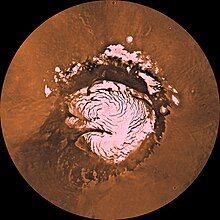 In addition to Earth, the planet Mars also has polar ice caps. They consist of primarily water-ice with a few percent dust.[11] Frozen carbon dioxide makes up a small permanent portion of the Planum Australe or the South Polar Layered Deposits. In both hemispheres a seasonal carbon dioxide frost deposits in the winter and sublimes during the spring.[citation needed]

Data collected in 2001 from NASA missions to Mars show that the southern residual ice cap undergoes sublimation inter-annually. The most widely accepted explanation is that fluctuations in the planet's orbit are causing the changes.[12]

On 29 April 2015, NASA stated that its New Horizons missions had discovered a feature thought to be a polar ice cap on the dwarf planet Pluto.[13] The probe's flyby of Pluto in July 2015 allowed the Alice ultraviolet imaging spectrometer to confirm that the feature was in fact an ice cap composed of methane and nitrogen ices.[14]

A photo describing the frozen methane and nitrogen on Pluto gathered from New Horizons.