Pointe-Claire is a municipality on the Island of Montreal in Quebec, Canada. It is entirely developed, and land use includes residential, light manufacturing, and retail. The population is about 31,000 and about 7,000 people are employed there.

The toponym (French pronunciation: ​[pwɛ̃t klɛʁ]) refers to the peninsula, or point, where the windmill, convent, and the Saint-Joachim de Pointe-Claire Church are sited. The point extends into Lac Saint-Louis and has a clear view of its surroundings.[5]

On a map of the Island of Montreal dated 1700, the words "Pointe" and "Pointe Claire" are visible.

Pointe-Claire was first described by Nicolas Perrot in his account of 1669, and the name Pointe-Claire appeared on a map as early as 1686. Although Samuel de Champlain canoed through the area in 1613, he reported no village or dwelling visible.[6] T The first grant of land under the seigneurial system was in 1684 to Pierre Cabassier, for a lot just east of Pointe Charlebois.[7] Under the seigneurial system, the Sulpicians had to build a mill for the colonists, who in turn had to grind their grain there at a set fee.

In 1707, after the Great Peace of Montreal was signed in 1701, the Chemin du Roy (now Lakeshore Road) from Dorval to the western tip of Montreal Island was opened having been ordered by intendant Jacques Raudot,[6] and the parish was subdivided in three côtes: St. Rémy (present-day Boulevard-des-Sources), St. Jean and St. Charles. Between côtes St. Rémy and St. Charles lay 33 lots (numbered 145 to 177). These were generally three arpents wide by 20 or 30 deep. Up to this time Pointe-Claire had only been accessible by boat.

In 1713 the seminary formed a parish on the land that now includes Pointe-Claire and much of the West Island, and in 1714 a church was built at the point, at the site of the present-day church.[8] Up to that time the area was served by an itinerant missionary priest. Initially the church was called Saint-Francois-de-Sales, but it was renamed six months later to Saint-Joachim de la pointe claire. The church and presbytery, both built of stone, formed a fort about two arpents (7000 m2) in area, surrounded by stakes. The construction was ordered by Governor Beauharnois out of fear of the Iroquois. The point was used as a stopover by voyageurs en route for the back country.[6]

In 1854 the municipality of Saint-Joachim-de-la-Pointe-Claire was defined, and the name eventually shortened to Pointe-Claire.[5]

The Grand Trunk Railway built a line in 1855, linking Pointe-Claire to Montreal. This brought people, and with them property development in an area that up to then had been largely agricultural. It also improved the welfare of farmers by providing a ready market for their goods. Suburban development began in 1893 when Otto Frederick Lilly acquired land spanning Boulevard Saint Jean. He used his influence with the Canadian Pacific Railway to have a station added to the line at the end of Cedar avenue, which he also paved from there down to Lakeshore Road. Both sides of Cedar Avenue were built up by 1920. Provincial highway number 2 (now Autoroute 20) was built alongside the railway in 1940, following expropriation of property. This led to a move of much of the town from the south to the north of the highway, namely the town hall, recreation centre, police station, and fire station.[8]

After the British North America Act of 1867 Pointe-Claire was included in the new federal riding of Jacques Cartier. In the election of the 7th of August, the men (suffrage did not extend to women until 1940) of Pointe-Claire elected the Conservative Guillaume Gamelin Gaucher.[9]

In 1900 a major fire destroyed much of village. It was discovered in an uninhabited building around 02:00 on the morning of 22 May. The wind caused the fire to spread to surrounding houses. The only water supply was from village wells or carried in buckets from the river. A small two-wheeled hose reel and hand pump was the only village fire protection. Locals failed to put out the fire and asked for help from Montreal. Equipment was sent by train but did not arrive in time to help. The worst of the damage was on the rue de l'église. In all about 30 buildings were destroyed, including the post office, the town hall, and the residences of about 200 people.[10][11]

From 2002-2006 there were municipal reorganizations across the province, which included a reorganization of Montreal, Pointe-Claire was merged into Montreal and became a borough. However, after political changes (2003 Quebec general election and the 2004 Quebec municipal referendums) it was re-constituted as an independent city in 2006, along with a number of other boroughs.

The shoreline of Pointe-Claire along Lac Saint-Louis is at about 30 metres above sea level and rises along a fault by about 30 metres not far from shore, more steeply in the west. The eastern side has a soil rich in clay, while the western side is stonier with limestone strata.[12] Pointe-Claire is bounded on the north by Dollard-des-Ormeaux, on the east by Dorval, on the south by Lac Saint-Louis, and on the west by Kirkland and Beaconsfield.

The city has a large business and industrial park spanning both sides of Quebec Autoroute 40. The manufacturing sector is the largest provider of jobs in Pointe-Claire, with 7,005 employees or 23.7 percent of employment. Employment in manufacturing has been declining, while employment has been growing in healthcare and social services. Retail is the second biggest sector with 17.7 percent of the total. Major employers (more than 500 employees) include: Future Electronics, Lakeshore General Hospital, Avon, Hewitt Équipement (CAT dealer), City of Pointe-Claire, Lumen, Bell TV, and Epicor. Employers of more than 200 employees include: Réno-Dépôt, El Ran Furniture, Tyco Medical, Hudson's Bay Company, and FPInnovations.[15] Companies headquartered in Pointe-Claire include Bouclair, Novacam Technologies, Odan Laboratories, The Canadian Salt Company Limited and Unidisc Music. 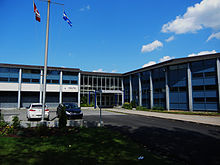 The current mayor of Pointe-Claire is John Belvedere. There are eight city councilors.

The Pointe-Claire Water Treatment Plant distributes an average of 65,000 m3 of potable water per day to a population of 87,248 people and approximately 1000 business and commercial users spread out in the city of Pointe-Claire, Beaconsfield, Baie-D'Urfé, Kirkland, Dollard-des-Ormeaux, Sainte-Anne-de-Bellevue and Senneville.[20]

Starting 2023, Pointe-Claire will be served by a station on the Réseau express métropolitain rapid transit network.