Base Mérimée Baie-Mahault Communes of France
Subprefecture and commune in Guadeloupe, France

Pointe-à-Pitre (French: Pointe-à-Pitre, pronounced [pwɛ̃tapitʁ]; Creole: Lapwent, [lapwɛ̃t]) is the largest city of Guadeloupe, an overseas région and département of France located in the Lesser Antilles, of which it is a sous-préfecture, being the seat of the Arrondissement of Pointe-à-Pitre.

Although Pointe-à-Pitre is not Guadeloupe's administrative capital (that distinction goes to Basse-Terre), it is nonetheless the region's largest city and economic capital. In 1999, it had a population of 171,773 inhabitants in its urban area, of whom 17,541 lived in the city (commune) of Pointe-à-Pitre proper. The inhabitants are called "Pointois". In 2014, its metropolitan population was estimated at 314,647 people.

Jacques Bangou is the current mayor of Pointe-à-Pitre.[4]

Pointe-à-Pitre is situated on the southwest portion of the island of Grande-Terre, facing the Caribbean Sea; it lies in the centre of Guadeloupe, and is near the Rivière Salée ("Salt River"), which separates Grande-Terre from Basse-Terre Island. The town of Pointe-à-Pitre is surrounded by the communes of Les Abymes, Baie-Mahault and Le Gosier. Pointe-à-Pitre is on a limestone plateau, which was a factor for the construction of the city. The bay, Petit Cul-de-Sac Marin, offers a sheltered port. 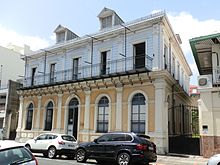 French colonial authorities had long thought about establishing a city on the current location of Pointe-à-Pitre, at the junction of Guadeloupe's two main 'island' districts (Basse-Terre Island and Grande Terre), but several attempts around 1713-1730 failed due to the insalubrious swampy ground.

During the British occupation of Guadeloupe (1759–1763) a settlement appeared on a hill overlooking the swamps. After the return of Guadeloupe to France in 1763, the city of Pointe-à-Pitre was officially founded under governor Gabriel de Clieu in 1764 by royal edict, and the swamps where downtown Pointe-à-Pitre stands today were drained in the following years, thus allowing the urban development of the city.

The development of the city was relatively rapid, partly thanks to the corsairs. In 1780, however, a great fire entirely destroyed the city. Sixty-three years later, in 1843, it was again destroyed by an earthquake. The history of Pointe-à-Pitre is marked by many disasters: the fires of 1850, 1871 and 1931, the earthquakes of 1851 and 1897 and the hurricanes of 1865 and 1928. The city also experienced several epidemics of cholera. Its location and large sheltered port have nonetheless allowed Pointe-à-Pitre to become Guadeloupe's largest city and economic capital. 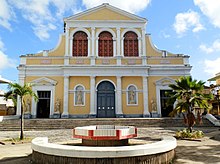 On the Köppen climate classification, Pointe-à-Pitre is on the border between tropical monsoon climate (Am) and tropical rainforest climate (Af). Like any other Eastern Caribbean city, it experiences rainfall quite evenly spread during the year, with a wetter season between July and November which coincides with the hurricane season. The city receives 1500–2000 mm of rainfall annually. Tropical heat is the norm, bringing steady highs of around 32 °C (89 °F) that drop to 20 °C (68 °F) at night.

The trade winds blow from the northeast and often temper the climate.

The tiny commune (municipality) of Pointe-à-Pitre is the center of a larger urban area covering several communes. This urban area – with 171,773 inhabitants at the 1999 census, representing 40% of the population – is the largest in Guadeloupe and one of the largest among French Overseas territories and departments.

The seven communes making up the urban area of Pointe-à-Pitre, with their 1999 populations, are:

The city is the commercial capital of Guadeloupe, serving as the main port of call for cargo and passengers alike. The main seaport is the Port de Jarry located across the Bay of Cul-de-Sac Marin in the commune (municipality) of Baie-Mahault. It has one of the biggest container terminals in the Eastern Caribbean with a quay 600m[9] long. The main exports are food crops (bananas, cocoa, coffee and sugar), animal products (beef, milk, yogurt) and manufactured goods (refined petroleum, textiles and medicines). The extensive Zone Industrielle de Jarry, directly west of Pointe-à-Pitre is a major centre of commercial and light industrial activity, notably for warehousing and distribution. Agricultural production continues in the east of the area where cattle rearing, banana and sugarcane growing continues. The nearby suburb of Le Gosier is Guadeloupe's main seaside resort.

Seventy percent of residents of Pointe-à-Pitre resided in subsidized public housing in 2009.[10]

Public preschools in Pointe-à-Pitre commune include:[11]

Private preschools and primary schools in Pointe-à-Pitre commune include:[11]