Pointe-à-Callière Museum is a museum of archaeology and history in Old Montreal, Quebec, Canada. It was founded in 1992 as part of celebrations to mark Montreal's 350th birthday. The museum has collections of artefacts from the First Nations of the Montreal region that illustrate how various cultures coexisted and interacted, and how the French and British regimes influenced the history of this territory over the years. Pointe-à-Callière has been included in National Historic Sites of Canada since 1998.

It receives more than 350,000 visitors a year.[1] Nearly 4.5 million people have come to the museum since it opened in 1992. It has received more than fifty national and international awards, including those in museography, architecture, and for cultural, educational and community activities. [3] The museum is affiliated with: the Canadian Museums Association, the Canadian Heritage Information Network, and the Virtual Museum of Canada.

The Pointe-à-Callière, Montréal Archaeology and History Complex opened in 1992.[4] The original plan had been to open up the William collector sewer and the remains of St. Anne's Market and the Parliament of the United Province of Canada. Recent[when?] archaeological digs brought to light the remains of Fort Ville-Marie and of Governor Louis-Hector de Callière’s home, which are planned for display in a future expansion to expose the Little Saint-Pierre River canalized by the William sewer, and the archaeological remains of St. Anne's Market, home to the Parliament of the United Province of Canada between 1844 and 1849. Visitors will be led to a new exhibition hall, with its entrance on McGill Street, for future international exhibitions on ancient civilizations and their cultures.

In 1996 the museum held its first travelling exhibition, Water In, Waste Out, presented at the Musée de la civilisation (Quebec City) and the Musée et sites archéologiques Saint-Romain-en-Gal (Vienne, France). In 1997, at the Art and Archaeology exhibition 20 Montreal high school students were able to exhibit their works at the Musée et sites archéologiques Saint-Romain-en-Gal. 1690: The Siege of Québec... The Story of a Sunken Ship has travelled to different locations in Quebec and internationally since 2000. France / New France. Birth of a French People in North America, which has already been presented in the Maritimes, toured internationally. The museum also has an exhibition on underground Montreal as part of a cultural route in the underground pedestrian corridors of the Quartier international de Montréal.

The Pointe-à-Callière stands above several historic and archaeological sites of national significance, showcasing major periods in the history of Montreal. Some of the archaeology exposed during construction of the building has been left in situ as part of the museum's permanent display on the history of the city. The museum was constructed on pilings to leave existing finds undisturbed and protected.

The main entrance of the museum rises above the point of land where Paul de Chomedey, Sieur de Maisonneuve, Jeanne Mance and other French settlers landed in 1642.[5]

The museum displays archaeological remains from every period in the city's past, and the sites it protects have produced one of the largest archaeological collections in Canada. The museum's staff specialise in research, conservation, outreach activities and managing archaeology and history. In partnership with universities,[which?] it conducts research on the city's archaeology and history, and its ethnohistorical collections include artifacts and documents donated locally. The museum also displays exhibits on the city's built and industrial heritage. 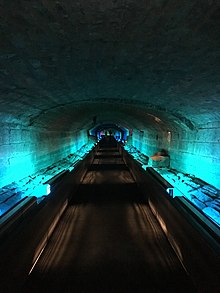 Along with its permanent exhibitions, since it opened the museum has presented more than thirty temporary exhibitions on themes relating to local and international archaeology, history and heritage, culture and artistic creativity, and multiculturalism. Education and outreach programs and cultural activities are available for school groups and the general public on other aspects of archaeology and history. The museum also hosts musical performances, theatre and demonstrations, including lectures, debates and participation in Montreal, Quebec, cross-Canada and international events. The museum works with Native and cultural communities. For ceremonies commemorating the 300th anniversary of the 1701 Great Peace of Montreal in 2001, the museum’s main partners were aboriginal groups from Quebec,[which?] the rest of Canada[which?] and the United States[which?].