Pohang (Korean pronunciation: [pʰo.ɦaŋ]) is a city in the province of North Gyeongsang, South Korea, and a main seaport in the Daegu-Gyeongbuk region. The built-up area of Pohang is located on the alluvium of the mouth of the Hyeongsan River. The city is divided into two wards (gu), Buk-gu or Northern Ward (북구; 北區) and Nam-gu or Southern Ward (남구; 南區).

This city has the largest population of North Gyeongsang Province and it has the third-largest land area of any city (si) in South Korea.[1]

The earliest evidence of human occupation in the Pohang area is from the Mumun Pottery Period (1500–300 BC). Archaeologists have unearthed small villages and megalithic burials (dolmen) from this period. Still a small fishing village at the dawn of the 20th century, the earliest steps toward developing Pohang into a place of greater significance were taken in 1930 with the construction of a modern harbour. Pohang grew rapidly afterward, attaining the designation of town (eup) in 1931 and then earning the status of city (si) in 1949.[2]

Pohang's road arteries and shipping port made it a place of strategic significance during the Korean War. An unopposed landing of UN forces at Pohang on July 18, 1950 was the first large-scale amphibious operation since World War II, and the region around Pohang saw fierce clashes between South Korea's 3rd Infantry Division and North Korea's 5th Infantry Division during August–September 1950.[3]

By the 1960s, Pohang was a small coastal city with a population of 50,000.[4] The next major development in Pohang's growth came in 1968 with the inauguration of the steel maker POSCO, and the local plant's commencement of production in 1972. The introduction of heavy industry to the city brought the local economy to a blend of iron, steel, shipbuilding and fisheries through the end of the 20th century.[2]

The early 21st century and the age of globalization has brought new economic challenges to companies such as POSCO, giving rise to beliefs that Pohang would be wise to not be overly reliant on heavy industry to maintain its prosperity.[5] In response, the Pohang of today presents itself as having an eye to the future, striving to become a diversified city of environmentalism and advanced learning, as well as a centre of arts and culture.[6]

On 4 August 1896, the three remaining hyeon, which at that time were Janggi, Yeonil (연일; 延日; originally Yeongil) and Cheongha were reassigned as counties or gun as part of the change to the 13-province division of the Korean Empire.

The city is served by several trains a day from Seoul and Daegu. Pohang is the terminus for a number of ferry routes serving the adjacent Sea of Japan, including the main tourist route for Ulleung Island and Liancourt Rocks. Pohang is the home of POSCO (the Pohang Steel Company), one of the largest steel producers in the world, and a host of related industries. As a result, the port shipped a total of 54.8 million tons in 2006.[13]

Pohang Airport used to provide few flights such as the flights from Pohang to Gimpo until July 1, 2015. However, since the remodeling of the runway is on progress, taking any flight is unavailable until March 30, 2016. The purpose of the construction is to enhance the safety of people, and it will be finished on March 30, 2016. The flight lists will be updated in official website ("Announcement about the pause of Pohang Airport" 1).

Several flights per day to Seoul Gimpo Airport are available at Pohang Airport.

Local transportation is served by only city buses. They run about 20 different ways of the city and some of them reach to the mountain folk. Also, the buses are classified into 2 kinds – one is Ilban-bus(normal bus) and the other is Jwaseok-bus (full of seats and a little more expensive than Ilban-bus). They run 15~25 minutes intervals along their own way. The bus routes are listed in both Korean and English but the Korean version is interactive, and thus more helpful.

There are two main bus terminals - Shiwae (시외) and Gosok (고속) which roughly translate into intercity/city and express. The Shiwae bus terminal (시외버스터미널) also acts as the cross-country bus terminal from which you can easily travel to nearby metropolitan cities such as Daegu and Busan (~1.5 hrs each depending on traffic). Their website is only in Korean and only accessible in Internet Explorer. The Gosok bus terminal (고속버스터미널) website is in both English and Korean. From Gosok bus terminal one can travel to Seoul, Gwangju, and Daejeon.

Pohang is also serviced by two train stations - Pohang station (포항역) and Wolpo station (월포역). Times and destinations are available on the Korail website which is in English and Korean.

If you want to take the KTX, until 2015 you had to go to the Singyeongju Station (신경주역). But since 2015, you can take the KTX at Pohang Station (포항역).

Other institutes of higher education

Thousands flock to see the fireworks festival at Yeongildae Beach each summer. People travel from all over the country to watch the show. The Culture & Arts Center, opened in 1995, holds performances and exhibitions in its various galleries and theaters. Pohang is known for gwamegi and holds an annual Gwamegi Festival. Gwamegi Festival is available on November annually. In 2015, the festival invited individuals from different ages. Numerous people can enjoy the festival, and the festival is sponsored by banks such as Suhyeop, Nonghyeop, Shinhan, and POSCO. During the festival, it is available to experience the old traditional Korean culture such as competing with person who sell Yeot. Furthermore, many singers from various places including Philippines are invited to demonstrate their talent to people ("Schedule" 1). In this place, Guryongpo, it is possible to try Gwamegi, Pidegi which is dried squid, and big crabs ("Information about the products in Guryongpo" 1). 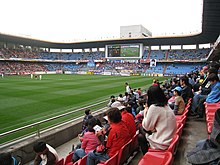 The city is home to the Pohang Steelers of K League 1.

The Jukdo Market is a large, bustling traditional market near the centre of the city, close to the port. It is well known throughout Korea as an important seafood market. There are many raw-fish restaurants in the market. The fish is cheaper here than in Seoul or Daegu.

Bukbu Beach is located in Duho-dong in the northern part of the city's built-up area. The beach front has been the focus of commercial developments such as bars, restaurants, and budget accommodations called Yeogwan. A number of beaches on the Sea of Japan can be found just north of the built-up area, including Chilpo and Wolpo.

Homigot, a point of land jutting out into the Sea of Japan, is located to the east of urban Pohang in Daebo-myeon. Homigot is one of the easternmost points on the Korean peninsula and as such serves every year as a gathering place for thousands to greet Korea's first sunrise of the New Year. The beach is also home to the 'Hands of Harmony' sculpture.

Bogyeongsa is a major Buddhist temple nestled in a steep green valley at the foot of Mount Naeyeon (710 m) in Songna-myeon, an area in the extreme northern part of Pohang. Yeonsan Waterfall is located nearby in the same mountain valley. There are hiking trails leading from the temple up into the mountains. Bogyeongsa also has a number of mountain hermitages in the vicinity.

Oeosa is a temple located in the extreme southern part of Pohang, just inside the mountains south of the coastal plain formed by the Naengcheon River. It is located at the foot of Mt. Unjae (481 m) in a steep valley in Daesong-myeon. Signs placed in and around Oeosa claim that the temple was founded by Wonhyo, the well-travelled Silla monk.

Pohang has a few major grocer stores including two Home Plus locations, two GS Supermarkets, and two E-marts. One Home Plus is by the Shiwae bus terminal and the other is closer to Jukdo Market. Jukdo market is an open market where you can purchase clothes, fish, produce, and a plethora of items. The one GS supermarket is in Jukdo-dong whereas the other is in Duho-dong. E-marts are located in I-dong and in Indeok-dong.

Pohang is twinned with:

Pohang is cooperating with: