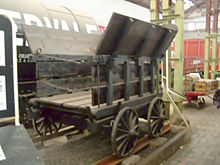 A replica of a "Little Eaton Tramway" wagon. The rails have an 'L' cross-section and the wheels have no flange.

A plateway is an early kind of railway, tramway or wagonway, where the rails are made from cast iron. They were mainly used for about 50 years up to 1830, though some continued later.

Plateways consisted of "L" shaped rails where a flange on the rail guided the wheels in contrast to edgeways, where flanges on the wheels guide it along the track.

Plateways were originally horsedrawn, but cable haulage and small, light locomotives were sometimes used later on.

The plates of the plateway were made of cast iron, often cast by the ironworks that were their users.[1] On most lines this system was replaced by rolled wrought iron (and later steel) "edge rails", which along with realignment to increase the radius of curves converted them to modern railways better suited to locomotive operation.

Plateways were particularly favoured in South Wales and the Forest of Dean, in some cases replacing existing edge rails. Other notable plateways included the Hay Railway, the Gloucester and Cheltenham Railway,[2] the Surrey Iron Railway, the Derby Canal Railway, the Kilmarnock and Troon Railway, the Portreath Tramroad in Cornwall and lines at Coalbrookdale, Shropshire. 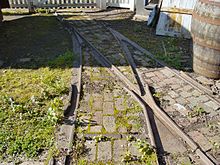 The plates of a plateway generally rested on stone blocks or sleepers, which served to spread the load over the ground, and to maintain the gauge (the distance between the rails or plates). The plates were usually made from cast iron and had differing cross sections depending on the manufacturer. They were often very short, typically about 3 feet (914 mm) long, able to stretch only from one block to the next.

The L section plateway was introduced for underground use by John Curr of Sheffield Park Colliery in about 1787.[3] Joseph Butler of Wingerworth near Chesterfield, constructed a line using similarly flanged plates in 1788. A leading advocate of plate rails was Benjamin Outram whose first line was from quarries at Crich to Bullbridge Wharf on the Cromford Canal. The early plates were prone to break so different cross sections were employed, such as a second flange underneath. Some lines later introduced chairs to support the plates on the blocks and wrought iron plates, increasing the length to 6 ft and later 9 ft, spanning several sleeper blocks[4]

William Jessop had used edge rails cast in three foot lengths, with "fish-bellying" to give greater strength along the length of the rail on a line between Nanpantan and Loughborough, Leicestershire in 1789. However, after he became a partner in Benjamin Outram and Company (Butterley Iron Works) he designed the Surrey Iron Railway and the Kilmarnock and Troon Railway as plateways.

An alternative design with the flange on the outside designed to be additionally used with flanged wheels was unsuccessfully trialed on the Monmouthshire Canal Company's line shortly before reconstruction as a modern railway. This idea was taken up in 1861 by the Toronto streetcar system. Horsecars ran on the upper, outer part as edgerail with the wheel flanges on the inside. The edge rail formed an outside flange for a broad foot which allowed wagons to pass through the unmade streets. This combination necessitated a unique broader gauge of 4 ft 10 7⁄8 in (1,495 mm) known as the Toronto gauge.[5]

The early plateways were usually operated on a toll basis, with any rolling stock owner able to operate their wagons on the tracks. Sometimes the plateway company was forbidden to operate its own wagons, so as to prevent a monopoly situation arising.

Some plateways such as the Gloucester and Cheltenham Railway were single track with passing loops at frequent intervals. The single track sections were arranged so that wagon drivers could see from one loop to the next, and wait for oncoming traffic if necessary. However others such as the Surrey Iron Railway, the Kilmarnock and Troon Railway and the Monmouthshire Canal Company's tramroads[6] and the Severn and Wye Railway were wholly or partly double track.

Plateways tended to get obstructed by loose stones and grit leading to wear.

Stone blocks had an advantage over timber sleepers in that they left the middle of the track unhindered for the hooves of horses.

Timber sleepers had an advantage over stone blocks in that they prevented the track from spreading, the gauges of some tramroads increased by a couple of inches after decades of horses passing up the middle, but being loose on the axles the wheels could usually be adjusted slightly with washers.

Level crossings could be made truly level, the carts being re-engaged with the flanges once across the roadway.[7]

Even older than plateways were wagonways which used wooden rails. Despite its ancient appearance, the Haytor Granite Tramway, the track with ledges cut in stone blocks to produce a similar effect as tram plates, was contemporary with plateways, being built in 1820.[8]