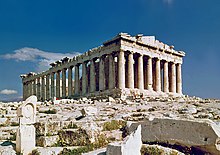 The Parthenon in Athens, Greece, was built for Athena in 447–432 BC and remained devoted to her cult for nearly a thousand years, later serving as a Christian church and then as an Islamic mosque under the Ottoman Empire.

A place of worship is a specially designed structure or consecrated space where individuals or a group of people such as a congregation come to perform acts of devotion, veneration, or religious study. A building constructed or used for this purpose is sometimes called a house of worship. Temples, churches, synagogues and mosques are examples of structures created for worship. A monastery, particularly for Buddhists, may serve both to house those belonging to religious orders and as a place of worship for visitors. Natural or topographical features may also serve as places of worship, and are considered holy or sacrosanct in some religions; the rituals associated with the Ganges river are an example in Hinduism.

Religious architecture expresses the religious beliefs, aesthetic choices, and economic and technological capacity of those who create or adapt it, and thus places of worship show great variety depending on time and place.

Wat Chana Songkhram is a Wat or Buddhist temple in Bangkok. 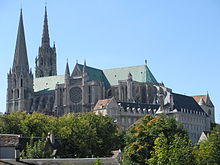 Chartres Cathedral is a cathedral of Roman Catholics in Chartres. 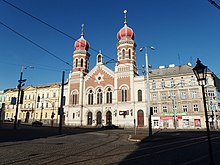 Great Synagogue of Plzeň is a Jewish synagogue in Plzeň. 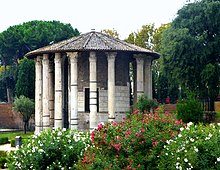 The Temple of Hercules Victor is a Roman temple in the Forum Boarium, Rome.

Ratneshwar Mahadev temple and other Hindu temples along the Manikarnika Ghat of Ganges.

Jamkaran Mosque is a mosque of Muslims in Iran. 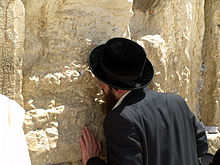 A man prays at the Western Wall, a Jewish site in Jerusalem. 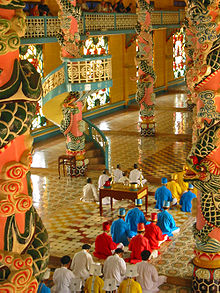 Holy See temple is a Cao Dai temple in Vietnam.

Ujigami Shrine is a Shinto shrine in Uji, Kyoto Prefecture.

The word church derives from the Greek ekklesia, meaning the called-out ones. Its original meaning is to refer to the body of believers, or the body of Christ.[1] The word church is used to refer to a Christian place of worship by some Christian denominations, including Anglicans and Catholics. Other Christian denominations, including the Religious Society of Friends, Mennonites, Christadelphians, and some unitarians, object to the use of the word "church" to refer to a building, as they argue that this word should be reserved for the body of believers who worship there.[2] Instead, these groups use words such as "Hall" to identify their places of worship or any building in use by them for the purpose of assembly.

A Hindu temple is a symbolic house, seat and body of god. It is a structure designed to bring human beings and gods together, using symbolism to express the ideas and beliefs of Hinduism.[4][5] The symbolism and structure of a Hindu temple are rooted in Vedic traditions, deploying circles and squares.[6] A temple incorporates all elements of Hindu cosmos—presenting the good, the evil and the human, as well as the elements of Hindu sense of cyclic time and the essence of life—symbolically presenting dharma, kama, artha, moksa, and karma.[7][8][9]

A Mosque (/mɒsk/; from Arabic: المسجد Al-masjid‎), literally meaning "place of prostration", with the same root as "سجدہ", is a place of worship for followers of Islam. There are strict and detailed requirements in Sunni jurisprudence (fiqh) for a place of worship to be considered a masjid, with places that do not meet these requirements regarded as musallas. There are stringent restrictions on the uses of the area formally demarcated as the mosque (which is often a small portion of the larger complex), and, in the Islamic Sharia law, after an area is formally designated as a mosque, it remains so until the Last Day.

Many mosques have elaborate domes, minarets, and prayer halls, in varying styles of architecture. Mosques originated on the Arabian Peninsula, but are now found in all inhabited continents. The mosque serves as a place where Muslims can come together for salat (صلاة ṣalāt, meaning "prayer") as well as a center for information, education, social welfare, and dispute settlement. The imam leads the congregation in prayer.

Derasar is a word used for a Jain temple in Gujarat and southern Rajasthan. Basadi is a Jain shrine or temple in Karnataka[10] There are some guidelines to follow when one is visiting a Jain temple:[11]