The Pittsburgh Post-Gazette, also known simply as the PG, is the largest newspaper serving metropolitan Pittsburgh, Pennsylvania. Descended from the Pittsburgh Gazette, established in 1786 as the first newspaper published west of the Allegheny Mountains, the paper has existed under its present title since 1927. It ended daily print publication in 2018 and currently puts out print editions only three days a week, going online-only the rest of the week. It has a politically conservative editorial tone, having shifted in recent years from a more liberal-leaning orientation.[2][3] 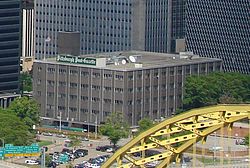 The Pittsburgh Post-Gazette Building in Downtown Pittsburgh, which housed the paper from 1962 to 2015.

The Post-Gazette began its history as a four-page weekly called The Pittsburgh Gazette, first published on July 29, 1786, with the encouragement of Hugh Henry Brackenridge.[4][5] It was the first newspaper published west of the Allegheny Mountains.[4] Published by Joseph Hall and John Scull, the paper covered the start of the nation. As one of its first major articles, the Gazette published the newly adopted Constitution of the United States.[6]

In 1820, under publishers Eichbaum and Johnston and editor Morgan Neville, the name changed to Pittsburgh Gazette and Manufacturing and Mercantile Advertiser.[7] David MacLean bought the paper in 1822, and later reverted to the former title.[8]

Under editor Neville B. Craig, whose service lasted from 1829 to 1841, the Gazette championed the Anti-Masonic movement. Craig turned the Gazette into the city's first daily paper, issued every afternoon except Sunday starting on July 30, 1833.[9]

In 1844, shortly after absorbing the Advocate, the Gazette switched its daily issue time to morning.[10] Its editorial stance at the time was conservative and strongly favoring the Whig Party.[11] By the 1850s the Gazette was credited with helping to organize a local chapter of the new Republican Party, and with contributing to the election of Abraham Lincoln. The paper was one of the first to suggest tensions between North and South would erupt in war.[12]

In 1900, George T. Oliver acquired the paper, merging it six years later with The Pittsburg Times to form The Gazette Times.[14]

The Pittsburgh Post first appeared on September 10, 1842, as the Daily Morning Post.[15] It had its origin in three pro-Democratic weeklies, the Mercury, Allegheny Democrat, and American Manufacturer, which came together through a pair of mergers in the early 1840s.[16] The three papers had for years engaged in bitter editorial battles with the Gazette.[17]

Like its predecessors, the Post advocated the policies of the Democratic Party. Its political opposition to the Whig and later Republican Gazette was so enduring that an eventual combination of the two rivals would have seemed unlikely.[18] 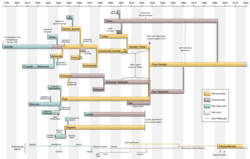 The 1920s were a time of consolidation in the long-overcrowded Pittsburgh newspaper market. In 1923, local publishers banded together to acquire and kill off the Dispatch and Leader. Four years later, William Randolph Hearst negotiated with the Olivers to purchase the morning Gazette Times and its evening sister, the Chronicle Telegraph, while Paul Block arranged to buy out the owner of the morning Post and evening Sun. After swapping the Sun in return for Hearst's Gazette Times, Block had both morning papers, which he combined to form the Post-Gazette. Hearst united the evening papers, creating the Sun-Telegraph. Both new papers debuted on August 2, 1927.[19]

The Post-Gazette tried to publish a Sunday paper to compete with the Sunday Press but it was not profitable; rising costs in general were challenging the company's bottom line.[21] In November 1961, the Post-Gazette entered into an agreement with the Pittsburgh Press Company to combine their production and advertising sales operations.[22] The Post-Gazette owned and operated its own news and editorial departments, but production and distribution of the paper was handled by the larger Press office.[22] This agreement stayed in place for over 30 years.[23]

The agreement gave the Post-Gazette a new home in the Press building, a comfortable upgrade from the hated "Sun-Telly barn."[24] Constructed for the Press in 1927 and expanded with a curtain wall in 1962, the building served as the Post-Gazette headquarters until 2015.[25]

On May 17, 1992, a strike by workers for the Press shut down publication of the Press; the joint operating agreement meant that the Post-Gazette also ceased to publish.[26] During the strike, the Scripps Howard company sold the Press to the Block family, owners of the Post-Gazette.[23] The Blocks did not resume printing the Press, and when the labor issue was resolved and publishing resumed, the Post-Gazette became the city's major paper, under the full masthead name Pittsburgh Post-Gazette Sun-Telegraph/The Pittsburgh Press.

The Block ownership did not take this opportunity to address labor costs, which had led to sale of the Press. This would come back to haunt them and lead to financial problems (see "Financial Challenges" below).

During the strike, publisher Richard Mellon Scaife expanded his paper, the Greensburg Tribune-Review, based in the county seat of adjoining Westmoreland County, where it had published for years. While maintaining the original paper in its facilities in Greensburg, he expanded it with a new Pittsburgh edition to serve the city and its suburbs. Scaife named this paper the Pittsburgh Tribune-Review.[27] Scaife has invested significant amounts of capital into upgraded facilities, separate offices and newsroom on Pittsburgh's North Side and a state of the art production facility in Marshall Township north of Pittsburgh in Allegheny County. Relations between the Post-Gazette and Tribune-Review, during its existence as a local print publication, were often competitive and frequently hostile, given Scaife's longstanding distaste for what he considered the Blocks' liberalism.

On November 14, 2011, the Post-Gazette revived the Pittsburgh Press as an afternoon online newspaper.[28]

In 2015, the paper moved into a new, state-of-the-art office building on the North Shore on a portion of the former site of Three Rivers Stadium, ending 53 years in the former Press building and more than two centuries in Downtown. Block Communications, feeling that the building is being greatly underutilized considering its proximity to Point State Park, still owns the building and plans to have the property redeveloped.[30]

The Post-Gazette building in October 2015.

The newspaper sponsored a 23,000 seat outdoor amphitheater in Burgettstown, Pennsylvania, the "Post-Gazette Pavilion", although it is still often referred to as "Star Lake", based on the original name, "Star Lake Amphitheater", and later "Coca-Cola Star Lake Amphitheater" under the former sponsor. They gave up naming rights in 2010.[31] First Niagara Bank, which had entered the Pittsburgh market the year before after acquiring National City branches from Pittsburgh-based PNC Financial Services,[32] took over the naming rights to the facility and is now known as the KeyBank Pavilion.[31]

When John Craig handed editorial reign to David Shribman in 2003, Craig told Shribman that the paper was in terrible financial shape. It was around the time of Hanukkah, and Shribman quipped, "It seemed there was only enough oil in this newspaper to keep the light on for one year."[36]

In September 2006, the paper disclosed that it was experiencing financial challenges, largely related to its labor costs. The paper also disclosed it had not been profitable since printing had resumed in 1993. As a result of these issues, the paper is considering a number of options, including putting the paper up for sale.[37] While deep concern about the paper's future ensued, negotiations proved fruitful and in February, 2007 the paper's unions ratified a new agreement with management mandating job cuts, changes in funding health care benefits and so forth.

In August 2018, the Post-Gazette ceased publishing daily. It began publishing online editions on Tuesdays and Saturdays and print editions the rest of the week. In October 2019, the paper eliminated the Monday and Wednesday editions, publishing paper editions three days a week.[38]

The Post-Gazette's once liberal editorial tone shifted more conservative following the 2018 consolidation of its editorial department with that of longtime sister newspaper The Blade of Toledo, Ohio, and the appointment of that paper's editorial page editor Keith Burris, a frequent defender of Donald Trump, to direct the editorial pages of both papers.[3] Burris assumed the additional position of executive editor of the Post-Gazette in 2019.[39]

In June 2018, the Post Gazette fired its long-time editorial cartoonist, Rob Rogers, a previous Pulitzer Prize for Editorial Cartooning finalist who had worked at the paper for 25 years,[40][41][42] having joined the paper in 1993[43] and worked under four supervising editors.[42] The firing came in the context of increasing support for President Donald Trump and political conservatism on the Post-Gazette editorial page.[40] Pittsburgh Mayor William Peduto (who was both a friend of Rogers' and had been lampooned in his cartoons) called the paper's firing of Rogers "disappointing" and said it sent "the wrong message about press freedoms."[44][42] The firing was strongly criticized by the Newspaper Guild of Pittsburgh[40] and the National Cartoonists Society.[42] The Association of American Editorial Cartoonists said in a statement: "It's as simple as this: Rogers was fired for refusing to do cartoons extolling Trump. Let that sink in."[41] The paper said that Rogers' dismissal "has little to do with politics, ideology or Donald Trump" but did not provide details.[42] Rogers wrote in the New York Times that the paper's new management had decided, in the lead-up to his firing, that his cartoons satirizing Trump "were 'too angry.'"[43] Rogers said that while editors had previously rejected (or "spiked") an average of two to three of his cartoons each year, under a new supervisor he had 19 cartoons or cartoon ideas killed in the first six months of 2018.[42] Four months later after Rogers was fired, the Post-Gazette hired conservative editorial cartoonist Steve Kelley as Roger's replacement.[45] After being fired, Rogers' comics continued to be published through Andrews McMeel Syndication.[42] As a freelancer, Rogers was named as a finalist for the 2019 Pulitzer Prize in editorial cartooning, with the committee citing his "provocative illustrations that channeled cultural and historical references with expert artistry and an eye for hypocrisy and injustice."[46]

In 2020, the Post-Gazette prohibited its reporter Alexis Johnson from covering the George Floyd protests.[47] The Post-Gazette said that Johnson, an African American, had shown bias by making a tweet which highlighted extensive littering from a Kenny Chesney concert tailgate. The pulling of Johnson from the story prompted an outcry from journalists, including the Newspaper Guild of Pittsburgh and many of Johnson's Post-Gazette colleagues.[47]

The Post-Gazette won Pulitzer Prizes in 1938, 1998, and 2019. Photographer Morris Berman maintained that the paper would have won a Pulitzer in 1964 but chose not to run his iconic Y. A. Tittle picture that he took at Pitt Stadium.[48] The photo would go on to win awards, hang in the Pro Football Hall of Fame, be used for the back cover of Tittle's autobiography and used in a Miller Beer High-Life commercial in 2005.

In 1938, Ray Sprigle won the Pulitzer Prize for Reporting for his investigation revealing that newly appointed Supreme Court Justice Hugo Black had been a member of the Ku Klux Klan.

Staff photographer Martha Rial won the 1998 Pulitzer Prize for Spot News Photography for her photographs of Rwandan and Burundian refugees.

In 1997 Bill Moushey won the National Press Club’s Freedom of Information Award on a series investigating the Federal Witness Protection Program and was a finalist for the Pulitzer.[49][50]

In addition to the Pulitzers mentioned above, the Post-Gazette also won the Wilbur Award from the Religion Communicators Council (RCC) in 2017 for religion editor Peter Smith's work, Silent Sanctuaries.[53] Smith, Stephanie Strasburg, and Shelly Bradbury were finalists for the 2020 Pulitzer Prize for Local Reporting for an investigation into sexual abuse in Pennsylvania's Amish and Mennonite communities.[54]

The Post-Gazette won the 2019 Pulitzer for its coverage of the Pittsburgh synagogue shooting. The paper was praised for its "immersive, compassionate coverage."[55]