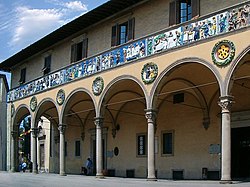 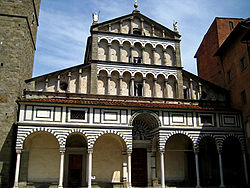 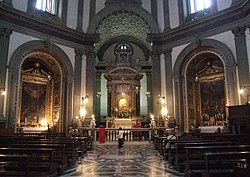 Interior of Basilica of Our Lady of Humility

listen)) is a city and comune in the Italian region of Tuscany, the capital of a province of the same name, located about 30 kilometres (19 mi) west and north of Florence and is crossed by the Ombrone Pistoiese, a tributary of the River Arno. It is a typical Italian medieval city, and it attracts many tourists, especially in the summer. The city is famous throughout Europe for its plant nurseries.

Pistoria (in Latin other possible forms are Pistorium or Pistoriae) was a centre of Gallic, Ligurian and Etruscan settlements before becoming a Roman colony in the 6th century BC, along the important road Via Cassia: in 62 BC the demagogue Catiline and his fellow conspirators were slain nearby. From the 5th century the city was a bishopric, and during the Lombardic kingdom it was a royal city and had several privileges. Pistoia's most splendid age began in 1177 when it proclaimed itself a free commune: in the following years it became an important political centre, erecting walls and several public and religious buildings.

In 1254 the Ghibelline town of Pistoia was conquered by the Guelph Florence; this did not pacify the town, but led to marked civil violence between "Black" and "White" Guelph factions, pitting different noble families against one another. In the Inferno of Dante, we encounter a particularly violent member of the Black faction of Pistoia, Vanni Fucci, tangled up in a knot of snakes while cursing God, who states: (I am a) beast and Pistoia my worthy lair. Pistoia remained a Florentine holding except for a brief period in the 14th century, when a former abbott, Ormanno Tedici, became Lord of the city. This did not last long, since his nephew Filippo sold the town to Castruccio Castracani of Lucca. The town was officially annexed to Florence in 1530.

One of the most famous families of the city was that of the Rospigliosi, owners of agricultural estates and wool merchants; the Rospigliosi provided a pope in 1667 with Giulio Rospigliosi, who briefly reigned as Clement IX (1667–69), and gave several cardinals to the church.

In 1786 a famous Jansenist episcopal synod was convened in Pistoia.

According to one theory, Pistoia lent its name to the pistol,[5] which started to be manufactured in Pistoia during the 16th century. But today, it is also notable for the extensive plant nurseries spreading around it. Consequently, Pistoia is also famous for its flower markets, as is the nearby Pescia.

A panoramic view of Pistoia from the northwest.

Although less visited than other cities in Tuscany, the medieval city within Pistoia's old walls is charming and well-preserved.

The large Piazza del Duomo, dominated by the cathedral, is lined with other medieval buildings, such as the Palazzo del Comune and the Palazzo del Podestà: it is the setting (in July) of the Giostra dell'Orso ("Bear Joust"), when the best horsemen of the city's traditional quarters tilt with lances at a target held up by a dummy shaped like a bear.

The original Cathedral of San Zeno (5th century) burned down in 1108, but was rebuilt during the 12th century, and received incremental improvements until the 17th century. The façade has a prominent Romanesque style, while the interior received heavy Baroque additions which were removed during the 1960s. Its outstanding feature is the Altar of St James, an exemplar of the silversmith's craft begun in 1287 but not finished until the 15th century. Its various sections contain 628 figures, the total weighing nearly a ton. The Romanesque belfry, standing at some 67 metres (220 ft), was erected over an ancient Lombard tower.

In the square is also the 14th-century Baptistry, in Gothic style, with white and green striped marble revetment characteristic of the Tuscan Gothic.

The Palazzo dei Vescovi ("Bishops' Palace"), is characterized by a Gothic loggiato on the first floor. It is known from 1091, initially as a fortified noble residence. In the 12th century it received a more decorated appearance, with mullioned windows and frescoes, of which traces remain. It was later modified in the mid-12th century (when the St. James Chapel, mentioned by Dante Alighieri in the XXIV canto of his Inferno) and in the 13th century; to the latter restoration belongs the white marble-decorated staircase, one of the most ancient examples in Italy in civil architecture. In the 14th century, the Chapel of St. Nicholas was decorated with stories of the namesake saint and other martyrs.

The Tower of Catilina dates to the High Middle Ages, and stands 30 metres (98 ft) high.

The railway station is located on the Viareggio–Florence railway and it is at the southern end of the Porrettana railway, the original line between Florence and Bologna.

Pistoia has been a setting for numerous works of fiction and movies, including films, such as I Love You in All the Languages in the World, Amici miei, and Medici: Masters of Florence.

Pistoia is twinned with:[7]