The Pirate Party (Finnish: Piraattipuolue, Swedish: Piratpartiet) is a registered political party in Finland. The group currently has around 4,065 members.[1] The chairman of the party is Pekka Mustonen.[2] The party is a member of Pirate Parties International.

In January 2008, Matti Hiltunen registered the domain piraattipuolue.fi and set up a BBS on the site. In May 2008, about 50 founding members of the party held the founding assembly in Tampere.[3] In September 2008 the party started to collect the 5,000 supporter cards [fi] needed to officially register the party. The party's goal was to take part in the 2009 European Parliamentary election. The supporter cards were collected by 1 June 2009,[4] too late for the elections. The party was officially registered on 13 August 2009.[5]

In October 2009, the Pirate Party took part in the special municipal election of Loviisa with 1 candidate, but did not win a seat. The party's first major election was the 2011 Finnish parliamentary election with 127 candidates in 11 constituencies,[6] gathering 0.5% of votes and becoming the largest party to have no seats in parliament.[7] In the 2014 European Parliament election it gathered 12,378 votes (0.7%).[8] In the 2015 Finnish parliamentary election the party got 25,105 or 0,8% of total votes, and was left without seats in the parliament.[9] Consequently, Ministry of Justice decided to remove the Pirate Party among 5 others from its list of political parties due to lack of confidence in parliamentary voting for two elections.[10] The party collected the needed 5,000 supporter cards again and was registered on 6 June 2016.[11]

In its political agenda, the party aims to develop open democracy, safeguard civil rights and increased transparency in politics. It wants to free information and culture from prohibitive restrictions and review the utility of the patent system, all while increasing privacy and freedom of speech. The party supports a basic income and wants to abolish daylight saving time.[14]

The party has a youth organisation, the Pirate Youth (Finnish: Piraattinuoret). It was founded on 5 February 2009 in Helsinki. It has an upper age-limit of 28 years.[15] Membership of Piraattinuoret is free of charge. 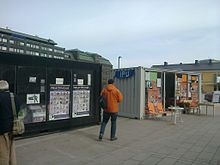 Election campaign stations for the Pirate Party and Independence Party on Narinkkatori in Helsinki.