The first Pirate Party to be established was the Pirate Party of Sweden (Swedish: Piratpartiet), whose website was launched on 1 January 2006 by Rick Falkvinge. Falkvinge was inspired to found the party after he found that Swedish politicians were generally unresponsive to Sweden's debate over changes to copyright law in 2005.[2]

The United States Pirate Party was founded on 6 June 2006 by University of Georgia graduate student Brent Allison. The party's concerns were abolishing the Digital Millennium Copyright Act, reducing the length of copyrights from 95 years after publication or 70 years after the author's death to 14 years, and the expiry of patents that do not result in significant progress after four years, as opposed to 20 years. However, Allison stepped down as leader three days after founding the party.[3]

The Pirate Party of Austria (German: Piratenpartei Österreichs) was founded in July 2006 in the run-up to the 2006 Austrian legislative election by Florian Hufsky and Jürgen "Juxi" Leitner.[4]

The Pirate Party of Finland was founded in 2008 and entered the official registry of Finnish political parties in 2009.

The Pirate Party of the Czech Republic (Czech: Česká pirátská strana) was founded on 19 April 2009 by Jiří Kadeřávek.

On 30 July 2009, the Pirate Party UK was registered with the Electoral Commission. Its first party leader was Andrew Robinson, and its treasurer was Eric Priezkalns.[7][8][9] 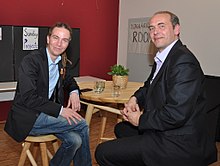 Reda had previously worked as an assistant in the office of former Pirate Party MEP Amelia Andersdotter.[18] On 11 June 2014, Reda was elected Vice-President of the Greens/EFA group in the European Parliament.[19] Reda was given the job of copyright reform rapporteur.[20]

In April 2016, in the wake of the Panama Papers scandal, polls showed the Icelandic Pirate Party at 43% and the Independence Party at 21.6%,[23] although the Pirate Party eventually won 15% of the vote in the 29 October 2016 parliamentary election.

Czech Pirate Party entered the Chamber of Deputies of the Czech Parliament for the first time after the election held on 20 and 21 October 2017 with 10.79%.

Czech Pirate Party, after finishing at the second place at the 2018 Prague municipal election, held on 5 and 6 October 2018, with 17.1%, formed a coalition with Prague Together and United Forces for Prague (TOP 09, Mayors and Independents, KDU-ČSL, Liberal-Environmental Party and SNK European Democrats). The representative of the Czech Pirate Party, Zdeněk Hřib, was selected as a Mayor of Prague. It is probably for the first time, when any pirate party has a mayor in one of the major cities of the world.

While parties vary insofar as specific policies go, common themes of the Pirate movement include:

Some campaigns have included demands for the reform of copyright and patent laws.[25] In 2010, Swedish MEP Christian Engström called for supporters of amendments to the Data Retention Directive to withdraw their signatures, citing a misleading campaign.[26]

The European Pirate Party (PPEU) is a European political party founded in March 2014 which consists of various pirate parties within European countries.[29]

Pirates Without Borders is an international association of pirates. Unlike Pirate Parties International (which accepts only parties as voting members and organizations as observing members), Pirates Without Borders accept individuals as members. The PWB see themselves as a basis for international projects. Through global cooperation, they strive to reveal the impact of multinational trade agreements on all people on Earth, and foster freedom and democracy.[30] PWB originates from an independent committee for the coordination of Pirate parties in German-speaking countries, known as DACHLuke (DACHL = Germany-Austria-Switzerland-Luxembourg).

1Party only participated in North West England constituency
2PPAT is in alliance with two other parties: The Austrian Communist Party and Der Wandel. The alliance is called "Europa Anders" and also includes some independents in their lists
3with Ecological Greens
4PPEE are campaigning for an independent candidate (Silver Meikar) who supports the pirate program

Representatives of the Pirate Party movement that have been elected to a national or supranational legislature.

Chamber of Deputies of the Czech Republic (in office)

Senate of the Czech Republic (in office)

Outside Sweden, pirate parties have been started in over 40 countries,[35] inspired by the Swedish initiative.