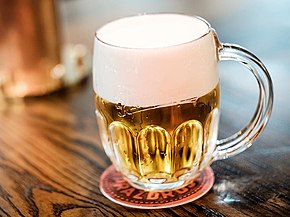 Pilsner (also pilsener or simply pils) is a type of pale lager. It takes its name from the Czech city of Pilsen, where it was first produced in 1842 by Bavarian brewer Josef Groll.[1] The world's first pale lager, the original Pilsner Urquell,[2] is still produced there today. 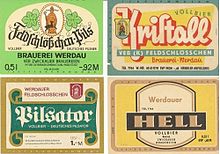 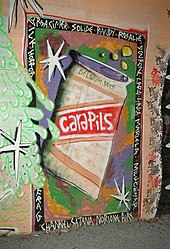 The city of Pilsen began brewing in 1295, but until the mid-1840s, most Bohemian beers were top-fermented. The taste and standards of quality often varied widely, and in 1838, consumers dumped whole barrels to show their dissatisfaction.[3] The officials of Pilsen founded a city-owned brewery in 1839, called Měšťanský pivovar Plzeň (German: Bürger-Brauerei, English: Citizens' Brewery – now Pilsner Urquell), which was to brew beer in the pioneering Bavarian style.[4] Brewers had begun aging beer made with cool fermenting yeasts in caves (lager, i.e., German: gelagert [stored]), which improved the beer's clarity and shelf-life. Part of this research benefited from the knowledge already expounded on in a book (printed in German in 1794, in Czech in 1799), written by Czech brewer František Ondřej Poupě (German: Franz Andreas Paupie) (1753–1805) from Brno.[5]

The Pilsen brewery recruited the Bavarian brewer Josef Groll (1813–1887) who, using the specifics of local ingredients and paler malts, presented his first batch of pale lager on 5 October 1842. The combination of Pilsen's remarkably soft water, local Saaz noble hops from nearby Žatec, brighter malt prepared by British technology, and Bavarian-style lagering (bottom-fermented beer termed at the time) produced a clear, golden beer. The recipe was regarded as a sensation and took hold very quickly.

Groll's contract with the brewery ended in 1845, he returned to Vilshofen and later inherited his father's brewery. The Groll brewery no longer exists. Parts of the brewery, however, were acquired by Wolferstetter, another brewery from Vilshofen, which still produces a Josef Groll Pils. Emergence of efficient glass manufacturing in Europe around the same time, lowered glass prices. This allowed the general population to purchase glass drinking vessels for the first time. These former luxury items showcased the visually pleasing golden clarity of the beer, further influencing the Pilsner's rapid dissemination.

In 1853, the beer was available in 35 pubs in Prague. In 1856, it came to Vienna and in 1862 to Paris. Improving transport and communications also meant that this new beer was soon available throughout Europe, and the Pilsner style of brewing was soon widely imitated. In 1859, Pilsner Bier was registered as a brand name at the Chamber of Commerce and Trade in Pilsen. In 1898, the Pilsner Urquell trademark was created to put emphasis on being the original brewery (Urquell, meaning 'original well', the English equivalent would probably be 'prototype Pilsener beer').

Some beers are labeled Urtyp Pilsener (UP) meaning they are brewed according to the original process, although many breweries use this accolade for their top beer.[6][7]

The introduction to Germany of modern refrigeration by Carl von Linde in the late 19th century eliminated the need for caves for beer storage, enabling the brewing of cool fermenting beer in many new locations.[8] Until 1993 the Pilsner Urquell brewery fermented its beer using open barrels in the cellars beneath their brewery. This changed in 1993 with the use of large cylindrical tanks. Small samples are still brewed in a traditional way for taste comparisons.

A modern pale lager termed a Pilsner may have a very light, clear colour from pale to golden yellow, with varying levels of hop aroma and flavour. The alcohol strength of beers termed Pilsner vary but are typically around 4.5%–5% (by volume). There are categories such as "European-Style Pilsner" at beer competitions such as the World Beer Cup. Pilsen style lagers are marketed internationally by numerous small brewers and larger conglomerates.

A glass of Bitburger, a German-style Pilsner

European-style Pilsner
Has a slightly sweet taste, can be produced from other than barley malt – Dutch: Amstel, Grolsch, Heineken[9] or Belgian: Jupiler, Stella Artois[10]

American-style Pilsner
The roots of the American pilsner date to the 1800s. German immigrants brought traditional pilsner brewing styles to America when they emigrated in the mid-19th century. Anheuser-Busch was one of the breweries that started with German immigrants and German brewing styles. American pilsners today are still closer to the German style, but the grist contains up to 25% corn and/or rice, which means that they cannot be marketed as a pilsner in Europe. The style generally has medium-low to medium sweet malt flavor, and medium to high European hop notes. American pilsners have “significantly less flavor, hops, and bitterness than traditional European Pilsners.” according to BJCP notes. Some tend to be a little darker and sweeter with a certain spiciness when compared to Czech and German variants.[11]

A single study utilizing blind taste-testing has found that several common mass-produced lagers have indistinguishable tastes to the average consumer.[13]