The Pilatus PC-12 is a single-engine turboprop passenger and cargo aircraft manufactured by Pilatus Aircraft of Stans, Switzerland, since 1991. The main market for the aircraft is corporate transport and regional airliner operators. The PC-12 is the best-selling pressurized single-engine turbine-powered aircraft in the world and has been for several consecutive years,[2][3] with 1,700 deliveries as of October 2019.[1]

In October 1989, Pilatus announced the development of the PC-12 at the annual convention of the National Business Aviation Association (NBAA).[4][5]:80 Prior to the 1989 announcement, the PC-12 project had been worked on for some time under high levels of secrecy; by the time of the announcement, assembly of the first prototype had already commenced.[5]:81–82 Pilatus believed that the PC-12 would fit a new market not served by existing aircraft and that the type would be the first single-engine aircraft capable of a large volume at high speed across long distances.[5]:82 The two prototypes were completed on 1 May 1991, with the first flight taking place on 31 May 1991.[6] Swiss certification of the type had been originally planned for mid-1991;[5]:81 however, a redesign of the wings (increase of wingspan and addition of winglets to ensure performance guarantees were met) delayed progress. On 30 March 1994, the Swiss Federal Office of Civil Aviation issued the type certificate for the PC-12;[7] Federal Aviation Administration approval in the U.S. followed on 15 July 1994.[8]

Since entering service, Pilatus developed a large number of improvements and options upon the original PC-12 model; changes include increases in the maximum takeoff weight, the use of increasingly powerful engines, the adoption of new avionics, noise-reduction measures, new propellers, speed and range increases, additional interiors and new inflight entertainment systems.[9][10][11][12] Other aviation firms, such as Finoff Aviation Products, have also produced their own independent products and aftermarket enhancement packages for the PC-12.[3][13][14]

Pilatus announced the PC-12NG (Next Generation) at the 2006 NBAA meeting in Orlando and officially launched it during the NBAA 2007 in Atlanta.[15] The NG features a more powerful Pratt & Whitney PT6A-67P engine with better climb performance and an increase in maximum cruise speed to 280 knots TAS. The NG also features a Honeywell Primus Apex glass cockpit; prior to this, the PC-12 had been one of the few high end models to lack flat-panel avionics.[9][16] The revised cockpit includes automatic pressurization control as well as cursor controlled inputs to the navigation system. The PC-12 NG winglets have also been modified from the original version.[14] Within two years of launch, over 200 orders reportedly had been placed for the PC-12 NG.[16] In May 2008, the first PC-12 NG was delivered.[17]

The PC-12M (Multipurpose) is based on the PC-12 NG but equipped with a more powerful electrical generation system that allows installing additional power-consuming equipment. This enables the PC-12M to perform missions such as flight inspection, air ambulance, aerial photography and aerial surveillance. An optional utility door accommodates parachute drops of people and cargo. This version is marketed in the United States as the PC-12 Spectre paramilitary special missions platform.[18]

On 18 December 2012, Pilatus officially opened its Chinese headquarters in Chongqing Liangjiang and announced future manufacturing of the PC-12 for Asia-Pacific customers on the production line at this site.[19][20] In September 2014, it was announced that the production for various aerostructures for the PC-12 NG would be performed by Tata Aircraft Systems in India from 2016 onwards, these parts having previously been manufactured by PZL-Świdnik in Poland.[21][22]

At the October 2019 NBAA convention, Pilatus announced the already certified PC-12NGX. Its PT6E-67XP includes a FADEC and low speed propeller mode to lower cabin noise. It reaches a 290 kn TAS (537 km/h) cruise. Updated Honeywell avionics with autothrottle feature both cursor control device and touchscreen. Adapted from the PC-24, the cabin windows are 10% larger and the redesigned cabin include new seats. Scheduled maintenance is extended to 600 flight hours and time between overhaul increases from 4,000 to 5,000 hours. Deliveries should start in the second quarter of 2020 at a US$ 4.39 million base price, up to 5.369 million typically equipped as an executive aircraft.[1]

Pilatus PC-12 taking off from a short unpaved airstrip

The PC-12 is a single-engine turboprop-powered business aircraft, designed for performing multiple roles and to deliver performance and safety equal to twin-engine aircraft. It is powered by a single Pratt & Whitney PT6A-67 engine; early models being powered by the PT6A-67B, while the later PC-12 NG variant uses the more powerful PT6A-67P, which is flat rated at only 70% of its maximum power.[2][3] According to Pilatus, the PC-12 NG has exceptional versatility and is capable of operating within the most rugged environments, such as the Australian outback; it is one of the few pressurized turbine-powered aircraft capable of operating from rough landing strips.[2] A trailing arm landing gear allow access to airfields inaccessible to many jet aircraft.[2][9]

A Luxembourg-registered PC-12/45 with doors open

The cabin can accommodate up to nine passengers and has a refreshment centre, an enclosed lavatory and a rear baggage area. Other cabin configurations include executive arrangements, seating between six and eight passengers; a four-seat passenger-cargo combi layout; and an air ambulance setup housing two litters and three attending medics.[2][9][23] The interior was designed in conjunction with BMW's Designworks division, making extensive use of leather, fine wood veneers, and various textiles to create an environment similar to a luxury road vehicle.[16] An atypically large cargo door is installed to accommodate bulky items, including palletised cargo.[2][9]

The PC-12 incorporates numerous safety measures. The PT6A-67 engine has a reputation for considerable reliability, a factor that has reportedly been decisive to some prospective operators.[9] To counteract stall and spin conditions, dual angle-of-attack sensors near the wingtips force the stick forwards in advance of a potential stall. For greater redundancy, the PC-12 NG has a complete split-bus dual electrical system similar to modern jet aircraft, in addition to two separate batteries and a third emergency battery.[9][16] The type is certified for flight into known ice conditions; as per standard fit, pneumatic de-icing systems are installed in the wings and empennage, while electrical de-icing measures are integrated into the windshield and exhaust heat is used for engine inlet de-icing.[5]:84 In 2014, Aviation Week describe the PC-12 as possessing "...comparatively slow take-off and landing speeds, excellent short-field performance, and easy handling characteristics."[3]

In addition to its uses as a passenger transport and private aircraft, the PC-12 can be configured as a multi-mission platform, such as an air ambulance or for conducting surveillance aircraft missions. In the latter role, a retractable Electro-optical/Infrared sensor may be installed into the aircraft's tail and an operator's console, containing two display monitors, a digital video recorder, communications panel and expansion bays to accommodate various radios and datalinks, can be fitted in the main cabin area; the aircraft may be highly customized to meet customer's specific mission requirements.[18][24] In the multi-mission capacity, the type has seen use by various customers, including the Red Cross, the Royal Flying Doctor Service of Australia, the Royal Canadian Mounted Police, and the United States Air Force.[2]

The type features a three-axis autopilot as standard, while weather radar, long-range navigation systems and radar altimeter are optional.[5]:84 The flight deck of the PC-12 NG is equipped with Honeywell's Primus Apex avionics system, consisting of four 10-inch high-resolution liquid crystal display screens, two of which perform as the primary flight displays directly forward of either pilot, the other two being multi-function displays in a central position between the two pilots.[2] The Apex system shares many similarities to the flight decks of other business jets and has been designed to minimize crew workload and provide for improved safety during single-pilot operations.[16] An advanced synthetic vision system, delivering greater situational awareness and safety during visual flight rules (VFR) flight, is also present.[2] The cockpit's layout is optimized for ergonomic and aesthetic appeal, providing similar comfort levels for the flight crew as to the passengers.[2][14] An engine condition monitoring system is present on the PC-12 NG, automatically monitoring engine parameters and producing relevant warnings, easing preventive maintenance efforts.[14]

Commercial, corporate and private use

Early sales of the PC-12 principally went to utility operators, because Pilatus was reportedly uncertain of the sales potential for business and passenger operators.[9] In 1994, the Royal Flying Doctor Service of Australia became the launch customer of the PC-12. It operates 32 PC-12s throughout Australia to deliver medical services in remote areas.[25]

In 2003, US charter airline Tradewind Aviation started operating the PC-12, which has now grown into one of the country's largest operators of the type, with 22 aircraft.[citation needed]

In 2006, the magazine Flying referred to the PC-12 as "...more economical to operate than any turbine airplane of similar size."[14] In 2007, Flying magazine described the high rate of value retention on used PC-12s as "unbelievable"—attributing this to the popular demand for the type.[26] High oil prices are a prominent factor for increasing sales of turboprops, the PC-12 among them.[27][28]

The bulk of demand comes from North America, and three-quarters of PC-12NG sales are in executive configurations.[29] While its price grew from $3.3 million in 2005 to $4.7 million in 2015, it retains 80-85% of its selling price after 10 years given average use, better than comparable turboprop or business jets, and it sells 40% faster.[30]

Pilatus also uses a series of overseas distributors to market and sell the PC-12 within designated regions. AMAC Aerospace is the exclusive sales agent for the type within the Middle East.[31][32]

In August 2014, Californian airline Surf Air placed an order for 15 PC-12 NGs and 50 options, one of the largest contract for the type.[33] PlaneSense, a New Hampshire-based fractional ownership company, manages the largest fleet of the type,[34] operating 34 PC-12s as of 2015.[35] 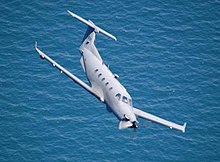 The PC-12 is Pilatus' first aircraft directed principally at the civil market. Despite the company historically being a military-oriented supplier, military sales for the type were considered a low priority during the early stages of development.[5]:82

View from below, gear and flaps up

Front view, flaps and gear down

Side view, flaps and gear down

Two PC-12s parked with a Cessna 208 Caravan between them