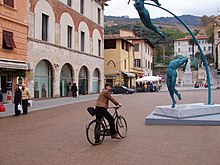 It lies on the main road and rail link from Pisa to Genova, just north of Viareggio.

The town has Roman origins and part of the Roman wall still exists.

The medieval town was founded in 1255 upon the pre-existing "Rocca di Sala" fortress of the Lombards by Luca Guiscardo da Pietrasanta, from whom it got its name. Pietrasanta was at its height a part of the Republic of Genoa (1316–1328). The town is first mentioned in 1331 in records of Genoa, when it became a part of the Lucca along with the river port of Motrone, and was held until 1430. At that time it passed back to Genoa until 1484, when it was annexed to the Medici held seigniory of Florence.

In 1494, Charles VIII of France took control of the town. It remained a Luccan town again until Pope Leo X, a member of the Medici family, gave Pietrasanta back to his family.

The town suffered a long period of decline during the 17th and 18th centuries, partially due to malaria. In 1841, Grand Duke Leopold II of Tuscany promoted several reconstruction projects (including the building of schools specially created to teach carving skills, and the reopening of the once famous quarries).

The town then became the capital of the Capitanato di Pietrasanta, which included the towns of Forte dei Marmi, Seravezza and Stazzema (this region became the historical heart of Versilia). The town joined the newly unified Italian Kingdom in 1861.

The area, like most of Tuscany in general, has long enjoyed the patronage of artists. Pietrasanta grew to importance during the 15th century, mainly due to its connection with marble. Michelangelo was the first sculptor to recognize the beauty of the local stone.

Pietrasanta is twinned with[4]