Prior to seeking elected office, Pettigrew was director of the Political Committee, NATO Assembly, in Brussels, from 1976 to 1978, executive assistant to the Leader of the Quebec Liberal Party from 1978 to 1981 and Foreign Policy Advisor to Pierre Trudeau, Prime Minister of Canada, from 1981 to 1984. Pettigrew was Vice-President of Samson Bélair/Deloitte & Touche in Montreal from 1985 to 1995, where he acted as a business consultant to companies with dealings in international markets.

Pettigrew served in the Liberal cabinet of Jean Chrétien in various capacities and in the government of Paul Martin as Canada's Minister of Foreign Affairs. In the 2006 federal election he was defeated as the Member of Parliament for the Montreal-area electoral district of Papineau.

Following the 1995 Quebec referendum Prime Minister Jean Chrétien was committed to bringing in more star candidates from Quebec to his cabinet. He thus appointed Pettigrew and Stéphane Dion to cabinet, even before they were in the house. Pettigrew previously ran for parliament in the 1984 federal election in the riding of Kamouraska—Rivière-du-Loup but was defeated by less than 7,000 votes by the Progressive Conservative candidate, André Plourde.

André Ouellet was made head of Canada Post, opening the riding of Papineau—Saint-Michel. Pettigrew was elected to Parliament in a March 25, 1996 by-election. He was re-elected in 1997 and 2000, representing the new riding of Papineau—Saint-Denis. In 1996 he became Minister for International Cooperation and Minister responsible for La Francophonie. 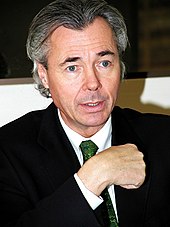 From 1996 to 1999, he also served as Minister of Human Resources Development. In that time, the Department of Human Resources Development represented more than half of the Canadian federal budget. Pettigrew negotiated with the provinces and the territories the National Child Benefit, the most important social program since Canada Pension Plan (1966), a 10 billions program by now. He implemented the new Employment Insurance Program which became balanced after years of deficit despite lowering the premiums. Under his watch, however, ineffective accounting practices at HRDC allegedly left millions of dollars unaccounted for. Pettigrew was fortunate to have been shuffled to the portfolio of International Trade. His successor Jane Stewart took the brunt of the "billion-dollar boondoggle" scandal.

As Minister for International Trade, he promoted free trade and always characterized the North American Free Trade Agreement (NAFTA) as "a tremendous success".[1] and a model to expand upon. He was a key participant in the World Trade Organization (WTO) trade talks, claiming that Canada's main goal of lowering agricultural subsidies would be of great benefit to the world's poorer nations. At the 2003 WTO Ministerial Conference in Cancún, Pettigrew played an aggressive role as chair of the working group on the Singapore issues, controversial sectors of proposed liberalization which were bitterly opposed by some developing nation delegates, not to mention masses of protesters outside of the gates where the meetings were held. He also championed the Free Trade Area of the Americas (FTAA), and in the period leading up to the Summit of the Americas in Quebec City in 2001, he spearheaded a campaign to allay growing public suspicion of the deal by promising the eventual release of the draft negotiating texts. After a delay due to translating the texts into the Portuguese language, the texts were made publicly available July 3, 2001. Throughout his mandate at International Trade, he was heavily embroiled in the US - Canada softwood lumber dispute.

On December 12, 2003, he was appointed Minister of Health and Minister of Intergovernmental Affairs by newly appointed Prime Minister Paul Martin. On July 20, 2004, he moved to his long-desired portfolio of Foreign Affairs minister, replacing Bill Graham.

On April 26, 2005, the Montreal newspaper Le Devoir reported that the trilingual Pettigrew, who speaks English, French and Spanish, would leave Canadian politics to serve as the Secretary General of the Organization of American States.[2] The newspaper suggested that Pettigrew had sufficient support among OAS members to win the job, although officially Canada supported the election of Luis Ernesto Derbez of Mexico in the 2005 OAS Secretary General election.

In 1999, Pettigrew wrote Pour une politique de la confiance (English translation: The New Politics of Confidence), a book on globalization and the art of governing.

On June 17, 2005, an incident occurred at a conference in Montreal regarding the subject of Haiti, at one point during the conference, Pettigrew was splashed with a red substance by Yves Engler, a political activist associated with the group Haiti Action Montreal. As Engler threw the red substance on Pettigrew, he shouted "Pettigrew lies, Haitians die". Engler claimed that the red paint was meant to symbolize the blood on the hands of the Canadian state due to Canada's involvement in Haiti. Pettigrew told police that he wanted full charges pressed against Engler. However, a couple of days later, Pettigrew suddenly decided to drop all charges.

Despite growing pressure, Pettigrew consistently stated that Canada would "stay the course" in Haiti.[3]

On December 28, 2005, Pettigrew was the victim of an attempted mugging while he was waiting for a train in the Montreal subway station. The accused, Frederick Estelle, has been charged with aggravated theft.[4][5]

On October 23, 2006, Deloitte Canada's Managing Partner and Chief Executive Alan MacGibbon announced that Pierre Pettigrew had been appointed as Executive Advisor for the firm's international activities. Pettigrew is a member of the Inter-American Dialogue.[6]

He was awarded an honorary Doctor of Laws degree by the University of Warwick in July 2008.

He currently resides in Toronto.[citation needed]