Pierre-Joseph-Olivier Chauveau (May 30, 1820 – April 4, 1890) was a Canadian lawyer and politician. Chauveau was the first Premier of the province of Quebec, following the establishment of Canada in 1867. Appointed to the office in 1867 as the leader of the Conservative Party, he won the provincial elections of 1867 and 1871.

Chauveau was also active in federal politics, being elected to the first House of Commons in 1867, an example of the dual mandate which was originally permitted in Canada. He resigned as premier and from his seats in the Commons and the Legislative Assembly in 1873, when he was appointed as Speaker of the Senate of Canada by the government of Sir John A. Macdonald. He resigned from that position only a year later to stand again for election to the Commons in the general election of 1874, but was defeated. He then retired from politics.

Chauveau had a life-long interest in literature and public affairs. He was the author of a novel and many short columns and letters on the political situation in Lower Canada. As a young man, he opposed the union of the Lower Canada and Upper Canada into the single Province of Canada, which he saw as primarily benefitting the financial sector, which was largely dominated by those of British stock. However, he gradually came to support Louis-Hippolyte LaFontaine, who argued that the union gave an opportunity for French-Canadians to acquire political power, through the establishment of responsible government.

Chauveau also had a strong interest in education. From 1855 to 1867, he was the Superintendent of the Bureau of Education for Canada East (as Lower Canada was known in the Province of Canada), and was responsible for a number of innovations in education. Following his retirement from politics, he held several different positions, including dean of the faculty of law at the Université Laval.

Chauveau as a young man

Chauveau was born in Charlesbourg, near Quebec City, in a long-established local family. He was in the fifth generation of the Chauveau family in Charlesbourg, descended from a settler in the early 18th century. His father died when he was young, so he was raised by his mother and his maternal grandfather, a wealthy merchant in Quebec City.[1] From 1829 to 1837, he attended the Petit Séminaire de Québec, where he gained a reputation as an excellent student, with strong literary interests.

In 1840, he married Marie-Louise-Flore Masse, with whom he had seven children.[2] One of his sons, Alexandre Chauveau, became a provincial politician in his own right.[3]

He was a lawyer by profession, and practised in Quebec City.

Chauveau took an active part in the intellectual and patriotic circles in Quebec City. In 1838 and 1839, he wrote two poems celebrating the Patriotes of the Lower Canada Rebellion, which were published in the newspaper Le Canadien. From 1841 to 1855, he contributed letters to the New York newspaper, Le Courrier des États-Unis, commenting on the political situation in Canada from the French-Canadian perspective.[5]

In 1853, Chauveau published a novel, Charles Guérin: Roman de moeurs canadiennes. The next year, he was one of the collaborators in La Pléiade rouge: Biographies humoristiques.[5]

Chaveau was also active in literary and patriotic organisations. He was one of the co-founders of the Société Saint-Jean-Baptiste of Quebec City in 1842 and of the Société canadienne d'études littéraires et scientifiques en 1843. Also in 1843, he was president of the Société littéraire et historique de Québec. He supported the Comité constitutionnel de la réforme et du progrès, founded at Quebec City in 1846. He was a member of the Institut canadien de Québec, serving as president in 1851 and 1852, and was vice-president of the Association de la bibliothèque de Québec.[5]

In 1867, he was elected to the Legislative Assembly of Quebec in Québec-Comté electoral district and headed a Conservative government as the first Premier of Quebec. As the first premier, he had the responsibility of establishing the institutions of government in the new province. He was also the Minister of Education and Provincial Secretary.

Also beginning in 1867, he was simultaneously the federal Member of Parliament for the riding of Quebec County (such "double mandates" were abolished in 1874). He resigned both his federal and provincial seats, as well the office of Premier, on February 25, 1873, following appointment as Speaker of the Senate of Canada on February 21, 1873.

He resigned from the Senate on January 8, 1874, and ran unsuccessfully as a candidate for Member of Parliament in the federal election in the riding of Charlevoix.

Following his defeat in the 1874 election, he retired from politics. 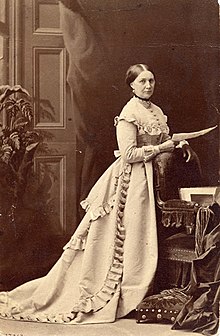 There is a Pierre-Joseph-Olivier Chauveau collection at Library and Archives Canada[6].