Piedmont (/ˈpiːdmɒnt/ PEED-mont; Italian: Piemonte, pronounced [pjeˈmonte]; Piedmontese, Occitan and Francoprovençal: Piemont, Piedmontese pronunciation: [pjeˈmʊŋt]) is a region in northwest Italy, one of the 20 regions of the country.[4] It borders the Liguria region to the south, the Lombardy and Emilia-Romagna regions to the east and the Aosta Valley region to the northwest; it also borders Switzerland to the northeast and France to the west. It has an area of 25,402 square kilometres (9,808 sq mi) making it the second largest region of Italy after Sicily and a population of 4,377,941 as of 30 November 2017. The capital of Piedmont is Turin.

The name Piedmont comes from medieval Latin Pedemontium or Pedemontis, i.e., ad pedem montium, meaning "at the foot of the mountains" (the Alps), attested in documents from the end of the 12th century.[5] 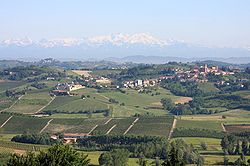 A Montferrat landscape, with the distant Alps in the background.

Piedmont is surrounded on three sides by the Alps, including Monviso, where the Po rises, and Monte Rosa. It borders with France (Auvergne-Rhône-Alpes and Provence-Alpes-Côte d'Azur), Switzerland (Ticino and Valais) and the Italian regions of Lombardy, Liguria, Aosta Valley and for a very small part with Emilia Romagna. The geography of Piedmont is 43.3% mountainous, along with extensive areas of hills (30.3%) and plains (26.4%).

Piedmont is the second largest of Italy's 20 regions, after Sicily. It is broadly coincident with the upper part of the drainage basin of the river Po, which rises from the slopes of Monviso in the west of the region and is Italy's largest river. The Po drains the semicircle formed by the Alps and Apennines, which surround the region on three sides.

From the highest peaks, the land slopes down to hilly areas, (sometimes with a brusque transition from mountain to plain) and then to the Padan Plain. The boundary between the two is characterised by resurgent springs—typical of the Padan Plain—which supply fresh water to the rivers and a dense network of irrigation canals.

The countryside is very diverse: from the rugged peaks of the massifs of Monte Rosa and Gran Paradiso to the damp rice paddies of Vercelli and Novara, from the gentle hillsides of the Langhe, Roero and Montferrat to the plains. 7.6% of the entire territory is considered protected area. There are 56 different national or regional parks; one of the most famous is the Gran Paradiso National Park, between Piedmont and the Aosta Valley.

Other towns of Piedmont with more than 20,000 inhabitants sorted by population :

The Palazzina di caccia of Stupinigi, in Nichelino, is a UNESCO World Heritage Site.

Piedmont was inhabited in early historic times by Celtic-Ligurian tribes such as the Taurini and the Salassi. They were later subdued by the Romans (c. 220 BC), who founded several colonies there including Augusta Taurinorum (Turin) and Eporedia (Ivrea). After the fall of the Western Roman Empire, the region was successively invaded by the Burgundians, the Ostrogoths (5th century), East Romans, Lombards (6th century), and Franks (773).

In the 9th–10th centuries there were further incursions by the Magyars, Saracens and Muslim Moors.[6] At the time Piedmont, as part of the Kingdom of Italy within the Holy Roman Empire, was subdivided into several marches and counties.

In 1046, Oddo of Savoy added Piedmont to the County of Savoy, with a capital at Chambéry (now in France). Other areas remained independent, such as the powerful comuni (municipalities) of Asti and Alessandria and the marquisates of Saluzzo and Montferrat. The County of Savoy became the Duchy of Savoy in 1416, and Duke Emanuele Filiberto moved the seat to Turin in 1563. In 1720, the Duke of Savoy became King of Sardinia, founding what evolved into the Kingdom of Sardinia and increasing Turin's importance as a European capital.

The Republic of Alba was created in 1796 as a French client republic in Piedmont. A new client republic, the Piedmontese Republic, existed between 1798 and 1799 before it was reoccupied by Austrian and Russian troops. In June 1800 a third client republic, the Subalpine Republic, was established in Piedmont. It fell under full French control in 1801 and it was annexed by France in September 1802. In the Congress of Vienna, the Kingdom of Sardinia was restored, and furthermore received the Republic of Genoa to strengthen it as a barrier against France.

Piedmont was a springboard for Italian unification in 1859–1861, following earlier unsuccessful wars against the Austrian Empire in 1820–1821[7] and 1848–1849. This process is sometimes referred to as Piedmontisation.[8] However, the efforts were later countered by the efforts of rural farmers.[9][10]

The House of Savoy became Kings of Italy, and Turin briefly became the capital of Italy. However, when the Italian capital was moved to Florence, and then to Rome, the administrative and institutional importance of Piedmont was reduced. The only recognition of Piedmont's historical role was that the crown prince of Italy was known as the Prince of Piedmont. After Italian unification, Piedmont was one of the most important regions in the first Italian industrialization.[11]

The region contains major industrial centres, the most important of which is Turin, home to the FIAT automobile works. Olivetti, once a major electronics industry whose plants were in Scarmagno and Ivrea, has now turned into a small-scale computer service company. Biella produces wool, tissues and silks. Alba is the home of Ferrero's chocolate factories and some mechanical industries. Cuneo is another industrial centre, with many international manufacturers present within its metropolitan area. 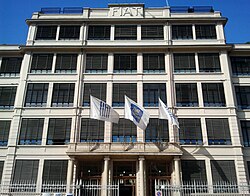 The Lingotto building in Turin, the world headquarters of Fiat.

Since 2006, the Piedmont region has benefited from the start of the Slow Food movement and Terra Madre, events that highlighted the rich agricultural and viticultural value of the Po valley and northern Italy. In the same year, the Piemonte Agency for Investments, Export and Tourism began to facilitate outside investment and promote Piedmont's industry and tourism. It was the first Italian institution to combine the activities being carried out by pre-existing local organizations to promote the territory internationally.

The campus of the Polytechnic University of Turin. 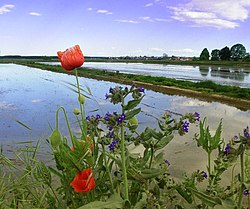 Rice fields between Novara and Vercelli.

Piedmont is one of the great winegrowing regions in Italy. More than half of its 700 square kilometres (170,000 acres) of vineyards are registered with DOC designations. It produces prestigious wines as Barolo and Barbaresco from the Langhe near Alba, and the Moscato d'Asti and sparkling Asti from the vineyards around Asti. The city of Asti is about 55 kilometres (34 miles) east of Turin in the plain of the Tanaro River and is one of the most important centres of Montferrat, one of the best known Italian wine districts in the world, declared officially on 22 June 2014 a UNESCO World Heritage site.[16] Indigenous grape varieties include Nebbiolo, Barbera, Dolcetto, Freisa, Grignolino and Brachetto.

Tourism in Piedmont employs 75,534 people and involves 17,367 companies operating in the hospitality and catering sector, with 1,473 hotels and other tourist accommodation. The sector generates a turnover of €2,671 million, 3.3% of the €80,196 million total estimated spending on tourism in Italy. The region is popular with both foreign visitors and those from other parts of Italy. In 2002 there were 2,651,068 total arrivals, 1,124,696 (42%) of whom were foreign. The traditional leading areas for tourism in Piedmont are the Lake District ("Piedmont's riviera"), which accounts for 32.84% of total overnight stays, and the metropolitan area of Turin, which accounts for 26.51%.[17]

In 2006, Turin hosted the XX Olympic Winter Games and in 2007 it hosted the XXIII Universiade. Alpine tourism tends to concentrate in a few highly developed stations like Alagna Valsesia and Sestriere. Around 1980, the long-distance trail Grande Traversata delle Alpi (GTA) was created to draw more attention to the variety of remote, sparsely inhabited valleys.

There are links with neighbouring France via the Fréjus and Colle di Tenda tunnels as well as the Montgenèvre Pass. Piedmont also connects with Switzerland by the Simplon and Great St Bernard passes. It is possible to reach Switzerland via a normal road that crosses eastern Piedmont, starting from Arona and ending in Locarno, on the Swiss border. Turin International Airport has domestic and international flights.[15] The region has the longest motorway network amongst the Italian regions (about 800 km). It radiates from Turin, connecting it with the other provinces in the region, as well as with the other regions in Italy. In 2001, the number of passenger cars per 1,000 inhabitants was 623 (above the national average of 575).[15]

See also: University of Turin and Category:Universities in Piedmont

The population of Piedmont followed a downward trend throughout the 1980s, a result of the natural negative balance (of some 3 to 4% per year), while the migratory balance since 1986 has again become positive because of immigration.[19] The population remained stable in the 1990s.

The Turin metro area grew rapidly in the 1950s and 1960s due to an increase of immigrants from southern Italy and Veneto and today it has a population of approximately two million. As of 2008[update], the Italian national institute of statistics (ISTAT) estimated that 310,543 foreign-born immigrants live in Piedmont, equal to 7.0% of the total regional population. Most immigrants come from Eastern Europe (mostly from Romania, Albania, and Ukraine) with smaller communities of African immigrants.

The Regional Government (Giunta Regionale) is presided by the President of the Region (Presidente della Regione), who is elected for a five-year term and is composed by the President and the Ministers, who are currently 14, including a Vice President (Vice Presidente).[20] In the last regional election, which took place on 29–30 March 2010, Roberto Cota (Lega Nord) defeated incumbent Mercedes Bresso (Democratic Party). In 2014 Cota chose not to stand again for President and the parties composing his coalition failed to agree on a single candidate, resulting in a landslide victory for Sergio Chiamparino, a Democrat who had been Mayor of Turin from 2001 to 2011. 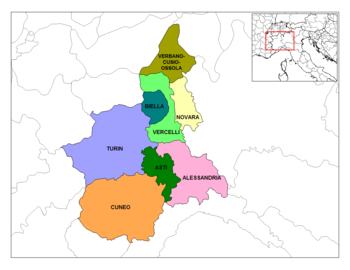 Piedmont is divided into eight provinces:

The Juventus Stadium in Turin is the home of Juventus F.C., throughout the years one of the more successful Serie A clubs.

In football, notable clubs in Piedmont include Turin-based Juventus and Torino, who have won 38 official top-flight league championships (as of the 2014-15 season) between them, more than any other city in Italy. Other smaller teams include the old "Piedmont Quadrilateral" components Novara, Alessandria, Casale, Pro Vercelli. With the pre-World War II success of Pro Vercelli and the dominance of Torino during the Grande Torino years and Juventus in more recent times, the region is the most successful in terms of championships won. Also Casale and Novese contributed with one scudetto each.