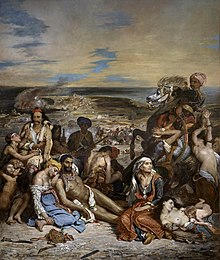 The Massacre at Chios by Eugène Delacroix reflects the attitudes of French Philhellenism.

Philhellenism ("the love of Greek culture") and philhellene ("the admirer of Greeks and everything Greek"), from the Greek φίλος philos "friend, lover" and ἑλληνισμός hellênismos "Greek", was an intellectual movement prominent mostly at the turn of the 19th century. It contributed to the sentiments that led Europeans such as Lord Byron or Charles Nicolas Fabvier to advocate for Greek independence from the Ottoman Empire.

The later 19th-century European philhellenism was largely to be found among the Classicists.

Coin of Mithridates I of Parthia from the mint at Seleucia on the Tigris. The Greek inscription reads ΒΑΣΙΛΕΩΣ ΜΕΓΑΛΟΥ ΑΡΣΑΚΟΥ ΦΙΛΕΛΛΗΝΟΣ ("[coin] of the great king Arsaces, friend of the Greeks")

In antiquity, the term philhellene (Greek: φιλέλλην, from φίλος - philos, "dear one, friend" + Έλλην - Hellen, "Greek"[1]) was used to describe both non-Greeks who were fond of Greek culture and Greeks who patriotically upheld their culture. The Liddell-Scott Greek-English Lexicon defines 'philhellene' as "fond of the Hellenes, mostly of foreign princes, as Amasis; of Parthian kings[...]; also of Hellenic tyrants, as Jason of Pherae and generally of Hellenic (Greek) patriots.[2]

The literate upper classes of Rome were increasingly Hellenized in their culture during the 3rd century BC.[6][7][8]

Among Romans the career of Titus Quinctius Flamininus (died 174 BC), who appeared at the Isthmian Games in Corinth in 196 BC and proclaimed the freedom of the Greek states, was fluent in Greek, stood out, according to Livy, as a great admirer of Greek culture; the Greeks hailed him as their liberator.[9] There were however, some Romans during the late Republic, who were distinctly anti-Greek, resenting the increasing influence of Greek culture on Roman life, an example being the Roman Censor, Cato the Elder and also Cato the Younger, who lived during the "Greek invasion" of Rome but towards the later years of his life he eventually became a philhellene after his stay in Rhodes.[citation needed]

The lyric poet Quintus Horatius Flaccus was another philhellene. He is notable for his words, "Graecia capta ferum victorem cepit et artis intulit agresti Latio" (Conquered Greece took captive her savage conqueror and brought her arts into rustic Latium), meaning that after the conquest of Greece the defeated Greeks created a cultural hegemony over the Romans.

Roman emperors known for their philhellenism include Nero, Hadrian, Marcus Aurelius and Julian the Apostate. 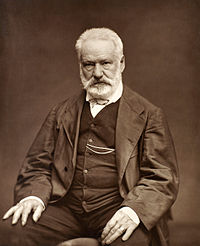 In the period of political reaction and repression after the fall of Napoleon, when the liberal-minded, educated and prosperous middle and upper classes of European societies found the romantic revolutionary ideals of 1789–92 repressed by the restoration of old regimes at home, the idea of the re-creation of a Greek state on the very territories that were sanctified by their view of Antiquity—which was reflected even in the furnishings of their own parlors and the contents of their bookcases—offered an ideal, set at a romantic distance. Under these conditions, the Greek uprising constituted a source of inspiration and expectations that could never actually be fulfilled, disappointing what Paul Cartledge called "the Victorian self-identification with the Glory that was Greece".[10] American higher education was fundamentally transformed by the rising admiration of and identification with ancient Greece in the 1830s and afterward.[11]

Another popular subject of interest in Greek culture at the turn of the 19th century was the shadowy Scythian philosopher Anacharsis, who lived in the 6th century BCE. The new prominence of Anacharsis was sparked by Jean-Jacques Barthélemy's fanciful Travels of Anacharsis the Younger in Greece (1788), a learned imaginary travel journal, one of the first historical novels, which a modern scholar has called "the encyclopedia of the new cult of the antique" in the late 18th century. It had a high impact on the growth of philhellenism in France: the book went through many editions, was reprinted in the United States and was translated into German and other languages. It later inspired European sympathy for the Greek War of Independence and spawned sequels and imitations throughout the 19th century.

In German culture the first phase of philhellenism can be traced in the careers and writings of Johann Joachim Winckelmann, one of the inventors of art history, Friedrich August Wolf, who inaugurated modern Homeric scholarship with his Prolegomena ad Homerum (1795) and the enlightened bureaucrat Wilhelm von Humboldt. It was also in this context that Johann Wolfgang von Goethe and Friedrich Hölderlin were to compose poetry and prose in the field of literature, elevating Hellenic themes in their works. In the German states, the private obsession with ancient Greece took public forms, institutionalizing an elite philhellene ethos through the Gymnasium, to revitalize German education at home, and providing on two occasions high-minded philhellene German princes ignorant of modern-day Greek realities, to be Greek sovereigns.[12]

During the later 19th century the new studies of archaeology and anthropology began to offer a quite separate view of ancient Greece, which had previously been experienced at second-hand only through Greek literature, Greek sculpture and architecture.[13] 20th century heirs of the 19th-century view of an unchanging, immortal quality of "Greekness" are typified in J.C. Lawson's Modern Greek Folklore and Ancient Greek Religion (1910) or R. and E. Blum's The Dangerous Hour: The lore of crisis and mystery in rural Greece (1970); according to the Classicist Paul Cartledge, they "represent this ideological construction of Greekness as an essence, a Classicizing essence to be sure, impervious to such historic changes as that from paganism to Orthodox Christianity, or from subsistence peasant agriculture to more or less internationally market-driven capitalist farming."[14]

The Philhellenic movement led to the introduction of Classics or Classical studies as a key element in education, introduced in the Gymnasien in Prussia. In England the main proponent of Classics in schools was Thomas Arnold, headmaster at Rugby School.[citation needed]

The theme of Nikos Dimou's The Misfortune to be Greek[15] is the perception that the Philhellenic West's projected desire for the modern Greeks to live up to their ancestors' glorious past has always been a burden upon the Greeks themselves. In particular, Western Philhellenism focused exclusively on the heritage of Classical Greek history, in effect negating or rejecting the heritage of Byzantine history which for the Greeks themselves is at least as important.

Philhellenism also created a renewed interest in the artistic movement of Neoclassicism, which idealized 5th-century Classical Greek art and architecture,[16] very much at second hand, through the writings of the first generation of art historians, like Johann Joachim Winckelmann and Gotthold Ephraim Lessing.

The groundswell of the Philhellenic movement was result of two generations of intrepid artists and amateur treasure-seekers, from Stuart and Revett, who published their measured drawings as The Antiquities of Athens and culminating with the removal of sculptures from Aegina and the Parthenon (the Elgin marbles), works that ravished the British Philhellenes, many of whom, however, deplored their removal.

Philhellenism in the Greek War of Independence and later

Some, notably Lord Byron, even took up arms to join the Greek revolutionaries. Many more financed the revolution or contributed through their artistic work.

Throughout the 19th century, philhellenes continued to support Greece politically and militarily. For example, Ricciotti Garibaldi led a volunteer expedition (Garibaldini) in the Greco-Turkish War of 1897.[18] A group of Garibaldini, headed by the Greek poet Lorentzos Mavilis, fought also with the Greek side during the Balkan Wars.