During the Fifth Labour Government, in office from 1999 to 2008, Goff served in a number of ministerial portfolios, including Minister of Defence, Minister of Corrections, Minister of Foreign Affairs and Trade, Minister for Disarmament and Arms Control and Associate Minister of Finance.[2] He was elected Mayor of Auckland in the October 2016 Auckland mayoral election, succeeding Len Brown, who stepped down after two terms.[3] In 2019, he was re-elected.

Goff was born and raised in Auckland. His family was very poor, and his father wanted Goff to enter the workforce immediately after finishing high school. Goff, however, wished to attend university, a decision that caused him to leave home when only sixteen years old. By working at Westfield Freezing Works[4] and as a cleaner, Goff was able to fund himself through university, gaining an MA (with first class honours) in political studies at the University of Auckland.[5] In 1973, he was Senior Scholar in Political Studies, and also won the Butterworth Prize for law.[6] While completing his MA, he lectured in Political Studies. After his overseas experience in Europe Goff returned to New Zealand where he became an Insurance Workers Union organiser.[5]

Goff joined the Labour Party in 1969, the same year he left home, and held a number of administrative positions within the party. In the 1981 elections, Goff stood for Parliament in the Roskill electorate, and was elected.[5]

In the 1990 elections, Labour was defeated, and Goff lost his own parliamentary seat to Gilbert Myles. While many commentators blamed Douglas's controversial reforms for Labour's loss, Goff said that the main problem had been in communication, not policy. Goff was appointed to a position at the Auckland Institute of Technology, and later accepted a scholarship to study for six months at Oxford University.[7] Returning to New Zealand, he eventually decided to stand for parliament once again.

In the 1993 elections, Goff was re-elected as MP for Roskill. Helen Clark, Labour's new leader, made him the party's spokesperson for Justice. In 1996, Goff was part of the group which asked Clark to step down as leader. Clark survived the challenge, and was advised by her allies to demote Goff, but chose not to do so.[8]

Goff retained his seat in the 1996 elections, having elected not to be placed on Labour's party list. In Opposition from 1996 to 1999, Goff was Labour's spokesperson on Justice, and Courts & Corrections.[citation needed] 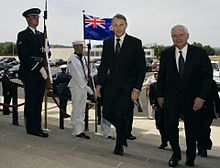 Goff and U.S. Secretary of Defense Robert Gates walk into the Pentagon, 11 May 2007.

In 2003 convicted rapist Stewart Murray Wilson doctored and distributed a letter from Justice Minister Goff, in an apparent attempt to get his case reviewed.[9] In 2005, as justice minister, he passed legislation that dramatically strengthened laws condemning child pornography and child sex.[10]

As Foreign and Trade Minister, Goff favoured free trade deals as a means of diplomacy and strengthening New Zealand's links with Asian neighbours.[11] Goff had a strong public profile and became one of the better-known members of the Labour Party; he was placed number four on the Labour Party list during the 2008 general election. Clark and Goff differed substantially in their economic policies, but they were able to work relatively well together, and this was shown during Goff's signing of the New Zealand–China Free Trade Agreement.[11] 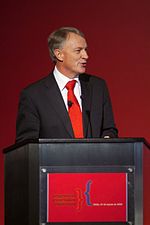 At the 2008 election Labour was defeated, and Clark resigned as leader. Goff was widely tipped as her successor. Goff became leader after a special caucus meeting on 11 November 2008.[12][13]

After initial strong popularity, Goff and Labour began to struggle in public opinion polls. A July 2011 poll showed support for the Labour Party at a 10-year low, at just 27%.[14] This followed a leaked policy proposal for a capital gains tax,[14] which the party's critics suggested was unpopular with the electorate. Polls in 2011 also showed an increase in support for the Green Party.

In an October 2010 speech, Goff emphasised the "Kiwi Dream" of high-wage jobs, home ownership and social protection. He criticised the National Government for free-market economic policies that Goff argued were accentuating inequality; he attributed social inequality to societal problems such as drug abuse and obesity.[15]

Both Goff and Prime Minister John Key said that they would not vote in the 2009 corporal punishment referendum. Goff said that the question "Should a smack as part of good parental correction be a criminal offence in New Zealand?" was "absolutely" the wrong question, and that "the question implies that if you vote 'yes' that you're in favour of criminal sanctions being taken against reasonable parents – actually nobody believes that."[16][17]

In John Key's Statement to Parliament in February 2010, the government announced its consideration of raising Goods and Services Tax from 12.5% to 15%.[18] Goff opposed the raise, saying that "GST increase will hurt families that are already struggling to make ends meet", and the Labour caucus set out on an 'Axe the Tax' nationwide road trip.[19][20] In May 2010 Goff suggested exempting fresh fruit and vegetables from GST.[21] Key called the exemption of such items "very bureaucratic" and Goff's announcement "desperate".[22]

In February 2010 a discussion document was released, proposing that 7,058 ha of land in national parks be opened up for mining.[23][24] Outside Parliament Goff told protesters that he and Labour would oppose the proposals "at every stage", and pledged to re-protect any land released from Schedule 4, should his party return to power.[25]

Parliamentary career after being leader: 2011–2016 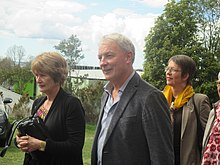 On 26 November 2011 the results of the general election were very poor for Labour, which lost 6.86% of the list vote and 9 seats.[26] Phil Goff stated that this "wasn't our time this time ... but our time will come again ... we're a bit bloodied but not defeated."[27] Three days after conceding defeat Goff and his deputy, Annette King announced they would be standing down from their leadership positions on 13 December, but would stay on in Parliament as electorate MPs.[28] Goff became the fourth Labour leader, the first since the ousting of Arnold Nordmeyer in 1965, to leave the Labour Party leadership without ever becoming Prime Minister. Goff is also the first Labour leader who was not a former Prime Minister to have led Labour as a first term Opposition party at an election since Nordmeyer in 1963.

Goff resigned from Parliament on 12 October 2016,[29] necessitating a by-election in his electorate of Mount Roskill.[30]

On 22 November 2015 Goff announced he would run for Mayor of Auckland in the 2016 mayoral election.[31] On 8 October 2016 Phil Goff won the election, becoming the second mayor of the Auckland 'super city'.

Goff was formally sworn in as Mayor of Auckland at a ceremonial event at the Auckland Town Hall on 1 November 2016. Upon taking office, he pledged to tackle social issues in Auckland, such as homelessness, so that "no one is left behind"; he also highlighted a need for improved infrastructure and housing availability in order to address the social issues.[32]

In early July 2018, Mayor Goff announced that the Auckland Council would not allow the far right Canadian activists Lauren Southern and Stefan Molyneux to use council premises on the grounds that they stirred up ethnic or religious tensions and promoted divisive views. Southern and Molyneux have drawn controversy in the past for their controversial views on feminism, gender, and Muslim immigration. The pair had booked the Bruce Mason Centre in Auckland's North Shore for a talk on 3 August 2018. While the Auckland Peace Action activist group and the Federation of Islamic Associations of New Zealand had objected to Southern and Molyneux's planned talk, Goff's decision was criticised by the promoter David Pellowe and human rights lawyer Craig Tuck for violating free speech.[33][34] In addition, The Spinoff contributor and self-described agnostic Muslim Ali Shakir defended the Southern and Molyneux tour and disputed the FIANZ's claim to speak for all Muslims on this matter.[35] New Zealand Deputy Prime Minister and Minister of Foreign Affairs Winston Peters and National Party leader Simon Bridges said they would have supported her right to speak, while Green Party co-leader Marama Davidson said she supported the ban.[36][37]

On 18 July, Free Speech Coalition spokesperson David Cumin announced that the group had filed legal proceedings against Mayor Goff and the Auckland Council after a failed attempt to broker a deal with Goff and the council to reinstate the speaking event planned by Southern and Molyneux.[42][43][44] On 25 July, the Free Speech Coalition withdrew their proceedings against Mayor Goff but warned that further legal action could go ahead. Goff welcomed the development and reiterated his opposition to allowing Council facilities to host events promoting hate speech.[45] The Immigration Minister Iain Lees-Galloway had earlier granted Southern and Molyneux a visa allowing them to visit New Zealand on the grounds that they had not violated any immigration character requirements.[46][47][48]

In late February 2020, the Serious Fraud Office announced that it was investigating an election expanses declaration of cash donations from fundraising auctions of $366,115 filed by Goff during the 2016 mayoral election.[49][50]

Phil Goff is married to Mary Ellen Goff, whom he met in 1971 and married in 1979. They have three adult children.[51] He lives on a 8-hectare (20-acre) farmlet in the rural Auckland suburb of Clevedon.[51] Goff's nephew, U.S. Army Captain Matthew Ferrara, was killed in 2007 during the Afghanistan War.[52]