Pheasants (/ˈfɛzənt/) are birds of several genera within the subfamily Phasianinae, of the family Phasianidae in the order Galliformes. Though they can be found world over in introduced (and captive) populations, the pheasant genera native range is restricted to Asia.

Pheasants are characterised by strong sexual dimorphism, males being highly decorated with bright colors and adornments such as wattles. Males are usually larger than females and have longer tails. Males play no part in rearing the young.

The best-known is the common pheasant, which is widespread throughout the world, in introduced feral populations and in farm operations. Various other pheasant species are popular in aviaries, such as the golden pheasant (Chrysolophus pictus).

According to the Oxford English Dictionary, the word "pheasant" ultimately comes from Phasis, the ancient name of what is now called the Rioni River in Georgia. It passed from Greek to Latin to French (spelled with an initial "f") then to English, appearing for the first time in English around 1299.[1]

This list is ordered to show presumed relationships between species. 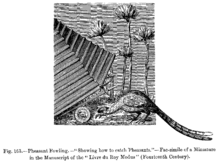 Pheasant fowling, "Showing how to catch pheasants", facsimile of a miniature in the manuscript of the "Livre du Roy Modus" (fourteenth century). 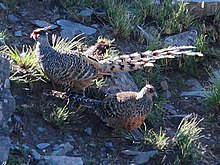 These old genera were used for: