Advertisement - You can get this game from STEAM
Place in Northeast, Brazil

Petrolina is a city located in the southernmost point of the state of Pernambuco, in Brazil. The population was 349,145 in 2019 in a total area of 4,756.8 km²,[3] which makes it the largest and the most important municipality in the state by area.

The name "Petrolina" originates from the merging of the original name "Pedra Linda", or "Beautiful Rocks".

Petrolina is situated on the left bank of the São Francisco River across from its twin city of Juazeiro, Bahia. The two cities, making up an urban area of almost 600.000 people, are connected by a modern bridge. Sobradinho Dam, enclosing Sobradinho Reservoir, the 12th largest reservoir (artificial lake) in the world, is located 26 kilometers upriver.[citation needed]

The municipality was designated a priority area for conservation and sustainable use when the Caatinga Ecological Corridor was created in 2006.[4]

Road connections are made by BR-407, connecting Feira de Santana, near Salvador, and Picos located in the state of Piauí. There are railroad connections in Juazeiro made by the Ferrovia Centro-Atlântica. The Petrolina Airport is mainly for regional flights (daily flights to the capital Recife and Salvador), plus the international exportation of fresh fruits produced by irrigation agro-poles.

The growth of Petrolina and its twin city Juazeiro (across the São Francisco River) is the result of the construction of the Sobradinho Dam and the abundant availability of water for irrigation in these otherwise desert soils. The region is perhaps the only one in the interior of the Northeast that has gained population through in-migration. While the population in the states of Pernambuco and Bahia as a whole increased by 50.1% between 1970 and 1990, it more than doubled in Petrolina-Juazeiro.[citation needed]

For many years the economy of the Valley of the São Francisco was based on extensive cattle raising combined with subsistence farming.

Starting in the 1960s with the development policies implemented by the government, the valley soon became the beneficiary of important investments for economic development, translated into the construction of highways, increasing electrical energy, improvement in sanitation systems etc.

Investments made in the agricultural sector with the implantation of the irrigated sections of Bebedouro and Senador Nilo Coelho, in turn brought in the installation of factories connected to the regional agriculture base, especially producers of tomato paste, juices, textiles etc.

Agriculture has grown by leaps and bounds with irrigated farming being the main source of income and jobs in Petrolina. The Petrolina-Juazeiro nucleus has turned into a producer of a wide range of irrigated high-value crops, including table grapes and mangos that are sold fresh by cargo aircraft to Europe and the United States, and other crops for the domestic market, including bananas, coconuts, guavas, passion fruit, melons, industrial tomatoes, watermelons and onions, among others. Due to irrigation, growers in Petrolina-Juazeiro produce 90% of the country's exports of mangos and 30% of table grapes, displacing the states of São Paulo and Rio Grande do Sul as the most important exporters of these products. 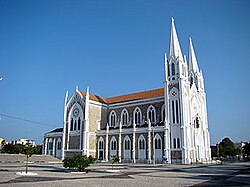 Its Catedral Sagrado Coração de Jesus e Cristo Rei, dedicated to the Sacred Heart of Christ the King in 1929,[5] is the cathedral episcopal see of the Roman Catholic Diocese of Petrolina (Ecclesiastical Province: Olinda e Recife). 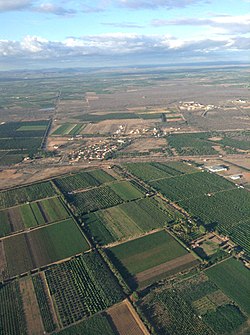 Grapes in São Francisco Valley, between Petrolina and Juazeiro

The main economic activities in Petrolina are based in the irrigated agriculture, related industry and commerce. Main crops in Tons[6] (2007)

There is also a substantial number of animals as of 2007, as follows:

Health indicators are as follows:[6]

Petrolina's climate is very hot and dry, being classified as hot semi-arid (Köppen climate classification BSh). Petrolina is located in the semi-arid belt of the Northeastern Region of Brazil that has a distinctively erratic and seasonal rainfall. The rainy season begins in November and ends in April. After that, the climate is still dry until October, and in many years there is very little rain even during the rainy season.