Perth (/pɜːrθ/) is a town in Eastern Ontario, Canada. It is located on the Tay River, 83 kilometres (52 mi) southwest of Ottawa, and is the seat of Lanark County.

The town was established as a military settlement in 1816, shortly after the War of 1812. The settlement of Lanark County began in 1815. In that year "the Settlement forming on the Rideau River" as it was officially referred to (and which soon became known as "Perth Military Settlement") began to function under Military direction. The settlement was named Perth in honour of acting Governor-General Sir Gordon Drummond, whose ancestral home was Perthshire.

Several townships were surveyed to facilitate the location of farms for military and other settlers; and the site of the future Town of Perth, which had been chosen as the headquarters of the Military Establishment was surveyed in 1816.[3]

Many of the first settlers were military veterans on half pay, while others were military veterans from France, Germany, Poland, Italy, Scotland or Ireland who were offered land in return for their service. The Reverend William Bell, who arrived in June 1817, noted in his diaries that the settlement was more European than the Scottish settlement described to him. The first Scottish settlers came in 1816.[3] Many of the Scottish immigrants were stonemasons; their work can be seen in many area buildings and in the locks of the Rideau Canal.

The military regime lasted until 1824, when settlers were granted municipal rights, i.e., 'the right of self-government'.[3] For many years Perth was the military, judicial, political and social capital, not only of the County of Lanark, but of the whole of the Ottawa Valley, north and west, until owing to the construction of the Rideau Canal, and the development of the lumber industry further north and west along the Ottawa, it finally was eclipsed by the town called "Bytown"—the present City of Ottawa, the Capital of the Dominion. But for many years the people of the town of Bytown, while it was still 'Bytown' had to come to Perth for their law and justice, for the law courts of the whole great district were located there.[3]

The first secretary/stores-keeper (and eventually postmaster and superintendent) of the settlement was Daniel Daverne, brought up from the Quarter Masters General Department in Kingston, Ontario, to assume these positions.

Perth is home to a pioneer burial ground, St. Paul's United Church Cemetery, formerly The Old Methodist Burying Ground. This cemetery is at the south-east end of the Last Duel Park on Robinson Street.[4] The Craig Street Cemetery, sometimes referred to as the "Old Burying Grounds" also contains many historic graves and saw use from 1820–1873.

The town's motto is "Pro Rege, Lege et Grege" ("For the King, the Law and the People"), which is shared with the City of Perth in Scotland[citation needed], and which was adopted in 1980 along with a new crest. The previous motto, "Festina lente sed certo" ("Make haste slowly but surely"), and original town crest appears on the uniforms of the Perth Citizen's Band. Founded in 1850, this band continues a tradition of community music with numerous concerts each season.

Near the town is the home of world show jumping champion Ian Millar and Millar Brooke Farm where his great horse Big Ben (1976–1999) is buried. The town has erected a bronze life-sized statue of the horse and Ian Millar, in Stewart Park, across from the Code's Mill building.

This town was the site of the last fatal duel in Upper Canada. Robert Lyon, a law student, was killed on June 13, 1833, after fighting over a woman (Elizabeth Hughes) with a former friend, John Wilson. A local park is named "Last Duel Park" to commemorate the event.

In 1893, a 22,000 pound cheese known as the 'Mammoth Cheese' was produced in Perth to be exhibited in Chicago at the World's Columbian Exposition to promote Canadian cheese around the world.[5][6][7][8]

The Links O'Tay Golf course, walking distance from the downtown core, began its trek through golfing history in 1890 and is now Canada's oldest continuously operating golf course. The Perth Citizens Band, still giving concerts on the bandstand behind Town Hall, is a tradition dating back over 150 years. The band is Canada's oldest active town band. The Perth Citizens Band played "The Maple Leaf Forever" as the Mammoth Cheese departed to the Chicago World's Fair in 1893. The bandstand has been behind the Town Hall since it was moved there in 1901 and free summer concerts have taken place there ever since.

Perth is also the site of the first installation of a telephone other than Bell's experimental installations. A town dentist, Dr. J. F. Kennedy, a friend of Alexander Graham Bell, installed a direct telephone connection between his home and office. By 1887, there were 19 telephones in Perth, with a switchboard in Dr. Kennedy's office.

In 2010, Perth held the historic "Kilt Run" in which 1,067 kilt-clad runners crossed the finish line. The idea to hold a kilt run in Perth was conceived of in October 2009 by Terry Stewart after the Mayor submitted a letter to the Perth Courier requesting town residents come up with an idea to help Perth, Scotland celebrate its 800th anniversary. The Perth, Ontario, Kilt Run has since become an annual event. The 2016 Kilt Run attracted 5,000 runners as part of the town's 200th anniversary.[9] 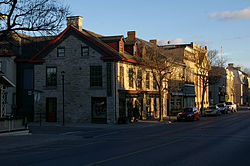 The Tay River splits into two main channels for much of its course through Perth. Much of downtown Perth, including the town hall, is on the island formed by the two channels. During the summer and fall of 2015, the fork in the river was modified to reduce erosion and flooding downstream.

The heritage downtown core of today's Perth consists of boutiques, specialty shops, cafés and restaurants, including crafts, antiques and flea markets, and summer Farmers' and Craft Markets. Most of these operate out of the century-old stone buildings in town. Code's Mill began as a tannery in the 1840's and then produced socks and felts until the mid-1900's. It was renovated in 1998 and now features a restaurant, boutique shops and wedding hall.[10] The Perth Museum, situated downtown at the Matheson House, is a historic house constructed in 1840 and is designated as a National Historic Site of Canada.

Erected in 1863, the Perth Town Hall stands out as one of the most impressive municipal buildings in Eastern Ontario. The two-storey structure with cupola-shaped clock tower is constructed from white or cream-coloured freestone (Potsdam sandstone). Throughout the years, the building has housed an auditorium, council chambers, post office, police headquarters, lock-up and municipal offices.[11] Perth's downtown area lies within a designated Heritage Conservation District.[12]

An interesting feature of the downtown core is the Crystal Palace, constructed from the discarded remnants of the glass street bus enclosures that used to be on Rideau Street in nearby Ottawa. This structure is located beside the Tay River and can be accessed by both Gore and Drummond Streets. It houses the Perth Farmers' and Craft Markets on summer Saturdays and is filled with Christmas trees decorated by community groups and schools in November and December. It also houses live music and children’s activities during the popular Festival of the Maples held in April each year.

Each summer in July, the Stewart Park Music Festival takes place in Stewart Park. It is a popular free festival featuring live music as well as artisan and food vendors.[13]

The Perth Lions Garlic Festival has been celebrating garlic grown in the area each August since 1997.[14] Another festival growing in popularity is the Perth Ribfest Music Festival, which includes kids activities, takes place at Last Duel Park.[15] The Perth Fair, a regional agricultural fair, takes place over the Labour Day weekend; it has been running annually since 1845, one of the oldest in Ontario.[16]

The Festival of Maples is held annually every spring since 1974 and marks the end of the maple syrup harvest, of which Lanark County is known for producing and is dubbed the 'Maple Syrup Capital of Ontario'.[17] The downtown festival features numerous shops and vendors, maple syrup producers and displays, children's entertainment, antique car show and a pancake breakfast. In 2019, the festival was held on April 27.[18]

The Perth Kilt Run normally takes place at the end of June but the 10th anniversary of the Kilt Run was held on August 17, 2019. It holds the Guinness World Record for the world's largest kilted run.[19]

The Perth Polar Bear Plunge, held annually on New Years Day since 1994, raises funds for local charities and is known as one of the most safest and successful Polar Bear Plunges in Canada.[20] 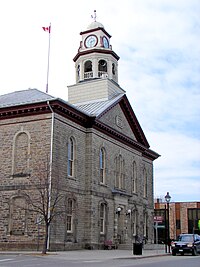 Hockey is very popular in Perth as it has been home to senior and junior teams. Currently, Perth is represented by the Blue Wings in the Eastern Ontario Junior "B" Hockey League. Minor hockey combines Perth and Lanark children with practices and games shared between the Perth and Lanark arenas. Perth was home to a professional baseball team for two years (1936–37) as part of the Canadian–American League. The Perth & District Indoor Pool is home to the Perth Stingrays Aquatic Club which offers a masters program as well. The Perth United Soccer Club also provides recreational and competitive soccer programs for all ages.[27]

Both high schools in Perth also offer a variety of other sports, such as basketball, football, volleyball, hockey, cross country running, badminton, soccer, curling, golf and track and field.

The 10-kilometre historic Tay Canal runs from downtown Perth through the Tay Marsh and connects to the Rideau Canal at Beveridge Locks.

French Immersion is offered at the elementary and high schools listed above.