Persian Empire in the Achaemenid era, 6th century BC 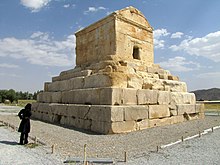 Tomb of Cyrus the Great, founder of the Achaemenid Empire (the first Persian Empire) in the 6th century BC

The Persian Empire or Imperial Iran (Persian: شاهنشاهی ایران‎, translit. Šâhanšâhiye Irân) is any one of the many imperial dynasties centred in Iran (Persia) from the 6th century BC, the Achaemenid Empire, to the 20th century, the Pahlavi dynasty.

The first dynasty of the Persian Empire was created by the Achaemenids, established by Cyrus the Great in 550 BC with the conquest of the Median, Lydian and Babylonian empires.[1][2] It covered much of the then known Ancient world.[3] Persepolis, the most famous historical site related to Persian Empire in the Achaemenid era, has been a UNESCO World Heritage Site since 1979.[4]

From 247 BC to 224 AD, Persia was ruled by the Parthian Empire, which supplanted the Hellenistic Seleucid Empire, and then by the Sassanian Empire, which ruled up until the mid-7th century.[5] The Persian Empire in the Sasanian era was interrupted by the Arab conquest of Persia in 651 AD, establishing the even larger Islamic caliphate, and later by the Mongol invasion. The main religion of ancient Persia was the native Zoroastrianism, but after the seventh century, it was slowly replaced by Islam.[6] 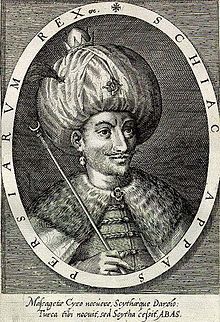 Abbas the Great, the most powerful king of the Safavid dynasty

The Safavid Empire of 1501 to 1736 was the greatest Iranian Empire established after the 7th-century Muslim conquest of Persia. From their base in Ardabil, the Safavid Persians established control over parts of Greater Persia/Iran and reasserted the Persian identity of the region, becoming the first native Persian dynasty since the Sasanian Empire to establish a unified Persian state.[7]

Literature, art and architecture flourished in the Safavid era, which is often cited[by whom?] as the "rebirth of the Persian Empire". The Safavids also declared Shia Islam the official religion in their empire - as opposed to the Sunni Islam predominant in the neighbouring Ottoman Empire. The Safavid Empire became the first Muslim Iranian state to rival in importance the Ottomans in Turkey (14th to 20th centuries) and the Mameluks in Egypt (1250-1517).[8]

The Afsharid dynasty was an Iranian dynasty that originated in Khorasan from the Afshar tribe. The dynasty was founded by Nader Shah. Nader rose to power during a period of chaos in Iran after a rebellion by the Hotaki Pashtuns had overthrown the weak Sultan Husayn, while the arch-enemy of the Safavids, the Ottomans, as well as the Russians had seized Iranian territory for themselves. Nader reunited the Iranian realm and removed the invaders. He became so powerful that he decided to depose the last members of the Safavid dynasty, which had ruled Iran for over 200 years, and become Shah himself in 1736. The Afsharids ruled Iran from 1736 to 1796.

The Zand dynasty was an Iranian dynasty of Lak a branch of Lurs[9] origin founded by Karim Khan Zand that initially ruled southern and central Iran in the 18th century. It later quickly came to expand to include much of the rest of contemporary Iran, as well as Azerbaijan, Bahrain,[10] and parts of Iraq and Armenia.

In 1796, after the fall of the Zand and Afsharid dynasties, Agha Mohammad Khan of Qajar dynasty was the sole ruler of Iran. But soon after, in 1797, he was assassinated by his servants. Since he had no children, the shah was succeeded by his nephew, Fath-Ali Shah.[11] The reign of Fath-Ali Shah saw huge and irrecoverable territorial loss for the Persian Empire after wars against the Russians in 1804–13 and 1826–28.[12] Fath-Ali died in 1834 and was succeeded by his grandson, Mohammad Shah.[13]

During his short reign, Mohammad Shah tried to modernize the Iranian army and recapture Herat. However, his attempts were unsuccessful. He died at the age of 40 in Mohammadieh Palace in 1848. After the death of Mohammad Shah, his son, Naser al-Din Shah, ascended to the Sun Throne. He ruled for 50 years, and became the third longest reigning monarch in Iranian history after Shapur II and Tahmasp I. Many events took place during his long reign, including wars with the British Empire, the rebellion of Babis, the assassination of Amir Kabir, and the Tobacco Protest.

After the assassination of Naser al-Din Shah, Mozaffar ad-Din Shah ascened to the throne. The first Iranian revolution, the Constitutional Revolution, took place during his reign.[14] Mozaffar ad-Din Shah was the last shah who died in Iran. Mohammad Ali Shah Qajar succeeded his father in 1907. He dissolved the parliament and declared the Constitution abolished[15] and bombarded the Majlis.[16] However, he abdicated after the Triumph of Tehran by pro-Constitution forces and re-establishment of the constitution.[17]

Following the abdication of the shah in 1909, the Majlis placed his 6-years-old son, Ahmad Shah on the Iranian throne.[18] World War I took place during his reign and Iran declared neutrality. However, it didn't stop the British forces and they occupied many parts of Iran, which caused the Great famine of 1917–1919 and death of 2 million Iranians.[19][20][21]

With the 1921 Persian coup d'état, Reza Pahlavi took control of the country.[22] Ahmad Shah left Iran for health reasons In 1923 and with the official end of the Qajar dynasty in 1925 and the rise of the Pahlavi dynasty, his tour became an exile. He died in 1930 in Paris.

The Pahlavi dynasty was the last ruling house of the Imperial State of Iran from 1925 until 1979, when the Persian monarchy was overthrown and abolished as a result of the Iranian Revolution. The dynasty was founded by Reza Shah Pahlavi in 1925, a former brigadier-general of the Persian Cossack Brigade, whose reign lasted until 1941 when he was forced to abdicate by the Allies after the Anglo-Soviet invasion of Iran. He was succeeded by his son, Mohammad Reza Pahlavi, the last Shah of Iran.