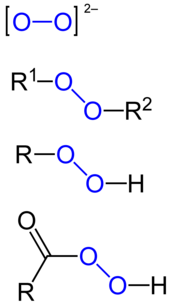 Peroxides are a group of compounds with the structure R−O−O−R.[1] The O−O group in a peroxide is called the peroxide group or peroxo group. In contrast to oxide ions, the oxygen atoms in the peroxide ion have an oxidation state of −1.

The most common peroxide is hydrogen peroxide (H2O2), colloquially known simply as "peroxide". It is marketed as a solution in water at various concentrations. Since hydrogen peroxide is nearly colorless, so are these solutions. It is mainly used as an oxidant and bleaching agent. However, hydrogen peroxide is also biochemically produced in the human body, largely as a result of a range of oxidase enzymes.[2] Concentrated solutions are potentially dangerous when in contact with organic compounds.

Structure and dimensions of H2O2.

Aside from hydrogen peroxide, some other major classes of peroxides are: