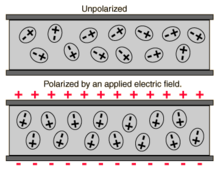 A dielectric medium showing orientation of charged particles creating polarization effects. Such a medium can have a lower ratio of electric flux to charge (more permittivity) than empty space

In the simplest case, the electric displacement field

resulting from an applied electric field

More generally, the permittivity is a thermodynamic function of state [1]. It can depend on the frequency, magnitude, and direction of the applied field. The SI unit for permittivity is farad per meter (F/m).

which is the ratio of the absolute permittivity

and the vacuum permittivity

This dimensionless quantity is also often and ambiguously referred to as the permittivity. Another common term encountered for both absolute and relative permittivity is the dielectric constant which has been deprecated in physics and engineering[2] as well as in chemistry.[3]

Relative permittivity is directly related to electric susceptibility (χ) by

The standard SI unit for permittivity is farad per meter (F/m or F·m−1).[4]

In electromagnetism, the electric displacement field D represents how an electric field E influences the organization of electric charges in a given medium, including charge migration and electric dipole reorientation. Its relation to permittivity in the very simple case of linear, homogeneous, isotropic materials with "instantaneous" response to changes in electric field is:

In general, permittivity is not a constant, as it can vary with the position in the medium, the frequency of the field applied, humidity, temperature, and other parameters. In a nonlinear medium, the permittivity can depend on the strength of the electric field. Permittivity as a function of frequency can take on real or complex values.

The vacuum permittivity ε0 (also called permittivity of free space or the electric constant) is the ratio D/E in free space. It also appears in the Coulomb force constant,

The constants c0 and μ0 were defined in SI units to have exact numerical values until redefinition of SI units in 2019.[7] (The approximation in the second value of ε0 above stems from π being an irrational number.)

where χ (frequently written χe) is the electric susceptibility of the material.

where ε0 is the electric permittivity of free space.

So in the case of a vacuum,

The susceptibility is also related to the polarizability of individual particles in the medium by the Clausius-Mossotti relation.

The permittivity ε and permeability µ of a medium together determine the phase velocity v = c/n of electromagnetic radiation through that medium:

The capacitance of a capacitor is based on its design and architecture, meaning it will not change with charging and discharging. The formula for capacitance in a parallel plate capacitor is written as

is the area of one plate,

is the distance between the plates, and

, it can be said that

Permittivity is connected to electric flux (and by extension electric field) through Gauss's law. Gauss's law states that for a closed Gaussian surface, s

is the net electric flux passing through the surface,

is the charge enclosed in the Gaussian surface,

is the electric field vector at a given point on the surface, and

is a differential area vector on the Gaussian surface.

If the Gaussian surface uniformly encloses an insulated, symmetrical charge arrangement, the formula can be simplified to

represents the angle between the electric field vector and the area vector.

If all of the electric field lines cross the surface at 90°, the formula can be further simplified to

Because the surface area of a sphere is

, the electric field a distance

away from a uniform, spherical charge arrangement is

). This formula applies to the electric field due to a point charge, outside of a conducting sphere or shell, outside of a uniformly charged insulating sphere, or between the plates of a spherical capacitor.

In general, a material cannot polarize instantaneously in response to an applied field, and so the more general formulation as a function of time is

That is, the polarization is a convolution of the electric field at previous times with time-dependent susceptibility given by χ(Δt). The upper limit of this integral can be extended to infinity as well if one defines χ(Δt) = 0 for Δt < 0. An instantaneous response would correspond to a Dirac delta function susceptibility χ(Δt) = χδ(Δt).

It is convenient to take the Fourier transform with respect to time and write this relationship as a function of frequency. Because of the convolution theorem, the integral becomes a simple product,

Moreover, the fact that the polarization can only depend on the electric field at previous times (i.e. effectively χ(Δt) = 0 for Δt < 0), a consequence of causality, imposes Kramers–Kronig constraints on the susceptibility χ(0). 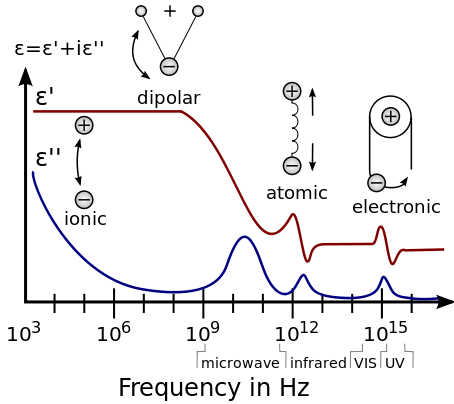 A dielectric permittivity spectrum over a wide range of frequencies. ε′ and ε″ denote the real and the imaginary part of the permittivity, respectively. Various processes are labeled on the image: ionic and dipolar relaxation, and atomic and electronic resonances at higher energies.[8]

As opposed to the response of a vacuum, the response of normal materials to external fields generally depends on the frequency of the field. This frequency dependence reflects the fact that a material's polarization does not change instantaneously when an electric field is applied. The response must always be causal (arising after the applied field), which can be represented by a phase difference. For this reason, permittivity is often treated as a complex function of the (angular) frequency ω of the applied field:

(since complex numbers allow specification of magnitude and phase). The definition of permittivity therefore becomes

The response of a medium to static electric fields is described by the low-frequency limit of permittivity, also called the static permittivity εs (also εDC):

At the high-frequency limit (meaning optical frequencies), the complex permittivity is commonly referred to as ε∞ (or sometimes εopt[9]). At the plasma frequency and below, dielectrics behave as ideal metals, with electron gas behavior. The static permittivity is a good approximation for alternating fields of low frequencies, and as the frequency increases a measurable phase difference δ emerges between D and E. The frequency at which the phase shift becomes noticeable depends on temperature and the details of the medium. For moderate field strength (E0), D and E remain proportional, and

Since the response of materials to alternating fields is characterized by a complex permittivity, it is natural to separate its real and imaginary parts, which is done by convention in the following way:

The choice of sign for time-dependence, e−iωt, dictates the sign convention for the imaginary part of permittivity. The signs used here correspond to those commonly used in physics, whereas for the engineering convention one should reverse all imaginary quantities.

The complex permittivity is usually a complicated function of frequency ω, since it is a superimposed description of dispersion phenomena occurring at multiple frequencies. The dielectric function ε(ω) must have poles only for frequencies with positive imaginary parts, and therefore satisfies the Kramers–Kronig relations. However, in the narrow frequency ranges that are often studied in practice, the permittivity can be approximated as frequency-independent or by model functions.

In this expression, Wc,v(E) represents the product of the Brillouin zone-averaged transition probability at the energy E with the joint density of states,[11][12] Jc,v(E); φ is a broadening function, representing the role of scattering in smearing out the energy levels.[13] In general, the broadening is intermediate between Lorentzian and Gaussian;[14][15] for an alloy it is somewhat closer to Gaussian because of strong scattering from statistical fluctuations in the local composition on a nanometer scale.

According to the Drude model of magnetized plasma, a more general expression which takes into account the interaction of the carriers with an alternating electric field at millimeter and microwave frequencies in an axially magnetized semiconductor requires the expression of the permittivity as a non-diagonal tensor.[16] (see also Electro-gyration).

If ε2 vanishes, then the tensor is diagonal but not proportional to the identity and the medium is said to be a uniaxial medium, which has similar properties to a uniaxial crystal.

Materials can be classified according to their complex-valued permittivity ε, upon comparison of its real ε′ and imaginary ε″ components (or, equivalently, conductivity, σ, when accounted for in the latter). A perfect conductor has infinite conductivity, σ = ∞, while a perfect dielectric is a material that has no conductivity at all, σ = 0; this latter case, of real-valued permittivity (or complex-valued permittivity with zero imaginary component) is also associated with the name lossless media.[17] Generally, when σ/ωε′ ≪ 1 we consider the material to be a low-loss dielectric (although not exactly lossless), whereas σ/ωε′ ≫ 1 is associated with a good conductor; such materials with non-negligible conductivity yield a large amount of loss that inhibit the propagation of electromagnetic waves, thus are also said to be lossy media. Those materials that do not fall under either limit are considered to be general media.

In the case of a lossy medium, i.e. when the conduction current is not negligible, the total current density flowing is:

In this formalism, the complex permittivity is defined as:[18][19]

In general, the absorption of electromagnetic energy by dielectrics is covered by a few different mechanisms that influence the shape of the permittivity as a function of frequency:

The above effects often combine to cause non-linear effects within capacitors. For example, dielectric absorption refers to the inability of a capacitor that has been charged for a long time to completely discharge when briefly discharged. Although an ideal capacitor would remain at zero volts after being discharged, real capacitors will develop a small voltage, a phenomenon that is also called soakage or battery action. For some dielectrics, such as many polymer films, the resulting voltage may be less than 1–2% of the original voltage. However, it can be as much as 15–25% in the case of electrolytic capacitors or supercapacitors.

In terms of quantum mechanics, permittivity is explained by atomic and molecular interactions.

At low frequencies, molecules in polar dielectrics are polarized by an applied electric field, which induces periodic rotations. For example, at the microwave frequency, the microwave field causes the periodic rotation of water molecules, sufficient to break hydrogen bonds. The field does work against the bonds and the energy is absorbed by the material as heat. This is why microwave ovens work very well for materials containing water. There are two maxima of the imaginary component (the absorptive index) of water, one at the microwave frequency, and the other at far ultraviolet (UV) frequency. Both of these resonances are at higher frequencies than the operating frequency of microwave ovens.

At moderate frequencies, the energy is too high to cause rotation, yet too low to affect electrons directly, and is absorbed in the form of resonant molecular vibrations. In water, this is where the absorptive index starts to drop sharply, and the minimum of the imaginary permittivity is at the frequency of blue light (optical regime).

At high frequencies (such as UV and above), molecules cannot relax, and the energy is purely absorbed by atoms, exciting electron energy levels. Thus, these frequencies are classified as ionizing radiation.

While carrying out a complete ab initio (that is, first-principles) modelling is now computationally possible, it has not been widely applied yet. Thus, a phenomenological model is accepted as being an adequate method of capturing experimental behaviors. The Debye model and the Lorentz model use a first-order and second-order (respectively) lumped system parameter linear representation (such as an RC and an LRC resonant circuit).

The relative permittivity of a material can be found by a variety of static electrical measurements. The complex permittivity is evaluated over a wide range of frequencies by using different variants of dielectric spectroscopy, covering nearly 21 orders of magnitude from 10−6 to 1015 hertz. Also, by using cryostats and ovens, the dielectric properties of a medium can be characterized over an array of temperatures. In order to study systems for such diverse excitation fields, a number of measurement setups are used, each adequate for a special frequency range.

Various microwave measurement techniques are outlined in Chen et al..[20] Typical errors for the Hakki-Coleman method employing a puck of material between conducting planes are about 0.3%.[21]