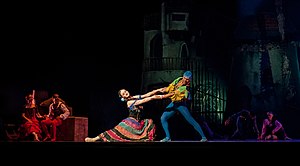 Performance is completion of a task with application of knowledge, skills and abilities.[1]

In the performing arts, a performance generally comprises an event in which a performer or group of performers present one or more works of art to an audience. In instrumental music (and in drama), performance is typically described as "play".[6] Usually the performers participate in rehearsals beforehand.

An effective performance is determined by achievement skills and competency of the performer - level of skill and knowledge. Spencer and McClelland in 1994 defined competency as "a combination of motives, traits, self-concepts, attitudes, cognitive behavior skills (content knowledge)" that helps a performer to differentiate themselves superior from average performers.[7] A performance may also describe the way in which an actor performs. In a solo capacity, it may also refer to a mime artist, comedian, conjurer, or other entertainer.

Performance art is another aspect of performance that grew in popularity in the early 20th century with Dada and Russian constructivism groups focusing on avant garde poetry readings and live paintings. A performance meant to be viewed by an audience. It can be scripted or completely made up on the spot and include audience participation if desired.[8] The emergence of Abstract expressionism in the 1950s with Jackson Pollock and Willem de Kooning gave way to Action painting, a technique that emphasized the dynamic movements of the artists as they splattered paint and other media on canvas or glass. For these artists, the motion of putting paint on canvas was just as valuable as the finished painting, and so it was common for artists to document their work in film, such as the short film Jackson Pollock 51(1951), featuring Pollock dripping paint onto a massive canvas on his studio floor.[9] Situationists in France, led by Guy Debord, married avant garde art with revolutionary politics to incite everyday acts of anarchy. The "Naked City Map" (1957) fragments the 19 sections of Paris, featuring the technique of Détournement and abstraction of the traditional environment, deconstructing the geometry and order of a typical city map.[10] At the New School for Social Research in New York, John Cage and Allan Kaprow became involved in developing Happening performance art. These carefully scripted one-off events incorporated the audience into acts of chaos and spontaneity. These happenings challenged traditional art conventions and encouraged artists to carefully consider the role of an audience.[11] In Japan, the 1954 Gutai group led by Yoshihara Jiro, Kanayma Akira, Murakami Saburo, Kazuo Shiraga, and Shimamoto Shozo made the materials of artmaking come to life with body movement, blurring the line between art and theater. Kazuo Shiraga Challenging Mud (1955) is a performance of the artist rolling and moving in mud, using their body as the artmaking tool, emphasizing the temporary nature of performance art.

Valie Export, an Austrian artist born Waltraud Lehner, performed "Tap and Touch Cinema" in 1968. She walked around the streets in Vienna during a film festival wearing a styrofoam box with a curtain over her chest. Passerby were asked to put their hands inside the box and touch her bare chest. This commentary on women being sexualized in film focused on the sense of touch rather than sight.[12] Adrian Piper and her performance Catalysis III (1970) featured the artist walking down New York City streets with her outfit painted white and a sign across her chest that said "wet paint." She was interested in the invisible social and racial dynamics in America and was determined to encourage civic-mindedness and interruption of the system.[13][14] Carolee Schneemann, American artist, performed Interior Scroll in 1975, where she unrolls Super-8 film "Kitsch's Last Meal" from her vagina. This nude performance contributes to a discourse on femininity, sexualization, and film. 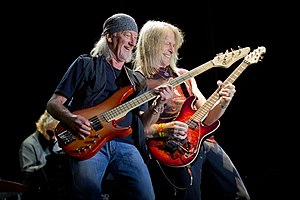 Other related factors are motivation to achieve success or avoid failure, task relevant attention, positive self-talk and cognitive regulation to achieve automaticity. Performance is also dependent on adaptation of eight areas: Handling crisis, managing stress, creative problem solving, knowing necessary functional tools and skills, agile management of complex processes, interpersonal adaptability, cultural adaptability, and physical fitness.[16] Performance is not always a result of practice, it is about honing the skill, even over practice itself can result in failure due to ego depletion.[17]

Theatrical performances, especially when the audience is limited to only a few observers, can lead to significant increases in the performer's heart rate above his or her baseline heart rate. This increase takes place in several stages relative to the performance itself, including anticipatory activation (one minute before the start of subject's speaking role), confrontation activation (during the subject's speaking role, at which point their heart rate peaks) and release period (one minute after the conclusion of the subject's speech).[18] The same physiological reactions can be experienced in other mediums, such as instrumental performance. When experiments were conducted to determine whether there was a correlation between audience size and heart rate (an indicator of anxiety) of instrumental performers, the researcher's findings ran contrary to previous studies, showing a positive correlation rather than a negative one.[19]

Heart rate shares a strong, positive correlation with the self reported anxiety of performers.[20] Other physiological responses to public performance include perspiration, secretion of the adrenal glands, and increased blood pressure.[21]

Performanceat Wikipedia's sister projects
This page is based on the Wikipedia article written by contributors.
Text is available under the CC BY-SA 4.0 license; additional terms may apply.
Images, videos and audio are available under their respective licenses.